My Name Is Anthony Gonsalves Review 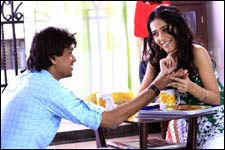 Samrat Sharma / fullhyd.com
EDITOR RATING
5.0
Performances
Script
Music/Soundtrack
Visuals
NA
NA
NA
NA
Suggestions
Can watch again
NA
Good for kids
NA
Good for dates
NA
Wait to rent it
NA
There are things working for My Name is Anthony Gonsalves, and when in top form, the film chugs along merrily because of them. Unfortunately, when they don't work, the movie becomes almost unbearably slow. So there you have it: the film is good in parts, has an interesting plot, and above all is decently acted in. For a decent time pass film this week, you could do worse.

But is that going to help the film? No. The fact is that the movie doesn't have any big ticket stars to talk about, and you have seen so many quality films being shunned just because of this. For every Taare Zameen Par that is an unmitigated success, people have roundly ignored a similar and equally brilliant Apna Aasman. For Nikhil Dwivedi, the young man who plays the titular hero, you can only hope people watch him long enough for him to get noticed.

For, Dwivedi turns in a very affable and energetic performance - confident in his posturing and delivery, and likable despite some raw moments every newcomer must suffer through. Even if the film is peppered with strong performances by a wholly unreliable but never less-than-intelligent Anupam Kher, and Pawan Malhotra, the man who not only is a man's actor, he holds on to his 'stache like a man too.

Anthony is a bartender who aspires to make it in the film world, and has been left under the care of Father Braganza (Mithun Chakraborty) by Sikander (Malhotra), who is also his surrogate father. Sikander, along with Maqsood (Mukesh Tiwari) and Riyaaz (Daya Shanker Pandey), works for the big don of the city, Murtuza (Kher). Sikander acts as Anthony's benefactor and is protective of him, so much so that he owns the pub where Anthony works, though Anthony has no idea what goes on in there.

On one hand trouble brews when Murtuza decides that Sikander, instead of nephew Maqsood, will take over for him, and on the other hand Anthony, who auditions for a film part, gets it. All of these threads join when he witnesses Sikander and his friends hide the body of a man who has just been killed. While his idea of Sikander comes crashing down, Sikander must choose between his surrogate son and the loyalties of his adopted father Murtuza. Added to the mix is Inspector Khan (Javed Sheikh), who begins investigating and hounding Anthony.

The whole cast gives a tight combined performance, making all of this unfold a very enjoyable, if hiccupy ride. Amrita Rao, too, darling of the small films that she is, turns in her good girl shoes and trades them for a bubbly effervescent miniskirts, and proves that she can be sexy in a cute way as well. Pawan Malhotra, however, is the star of the ensemble, giving a seasoned performance easily rivaling that of Pankaj Kapur in the other release this week.

The screenplay, though, is a dragging bore, with no idea of pacing. When things move they move really fast, but are punctuated with moments where nothing happens at all. Structure and form are what E Niwas struggles with as well, not quite taking the grip on the film as absolutely as you want a thriller director to. For too long, he remains in Vikram Bhatt territory; and we all know that is not a good territory at all.

As different as the film wants to be thematically, it is stuck in the regular Bollywood tropes. There are an item number (Hrishita Bhatt, if you must know), fairly standard shot selection, drab cinematography, and an end that can best be described as old school at its worst.

It would be interesting to see Nikhil Dwivedi in another role, since as the typical young boy caught in big things he is convincing but never exceptional. It remains to be seen if he can carry a film on his own strength, or if he can even carry this one. The film, however, still remains a bumpy, but fun, ride.

ADVERTISEMENT
This page was tagged for
My Name Is Anthony Gonsalves hindi movie
My Name Is Anthony Gonsalves reviews
release date
Nikhil Dwivedi, Amrita Rao
theatres list
Follow @fullhyderabad
Follow fullhyd.com on
About Hyderabad
The Hyderabad Community
Improve fullhyd.com
More
Our Other Local Guides
Our other sites
© Copyright 1999-2009 LRR Technologies (Hyderabad), Pvt Ltd. All rights reserved. fullhyd, fullhyderabad, Welcome To The Neighbourhood are trademarks of LRR Technologies (Hyderabad) Pvt Ltd. The textual, graphic, audio and audiovisual material in this site is protected by copyright law. You may not copy, distribute, or use this material except as necessary for your personal, non-commercial use. Any trademarks are the properties of their respective owners. More on Hyderabad, India. Jobs in Hyderabad.