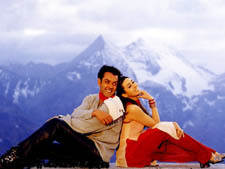 Avishek Gupta / fullhyd.com
EDITOR RATING
3.0
Performances
Script
Music/Soundtrack
Visuals
NA
NA
NA
NA
Suggestions
Can watch again
NA
Good for kids
NA
Good for dates
NA
Wait to rent it
NA
The wrong people get all the money. We are not talking about anything related to the story - it's just the state of affairs in Bollywood. It's difficult to believe that someone actually finances such hackneyed plots, and that too to the tune of crores of rupees. At any point in the movie, you have a strong sense of déjà vu - how many times haven't you seen it all before? It's like these people think that it's only the stars and the location that matter. Not that they'll listen, but here's advice. They don't. For proof, see how many days this flick will run.

The story, a remake of the Telugu Gulabi, is as old as Bollywood itself. Chander (Bobby Deol) is a fun-loving, carefree young man who believes in standing up for others. This streak earns him enemies, but also makes him quite attractive to the wealthy Pooja (Karisma Kapoor).

The true test of love happens through barriers galore: family disapproval, misunderstandings and more. And just when things are settling down, Pooja gets abducted by a heinous flesh trader (Rahul Dev), and Chander is framed as the abductor. Overnight an outlaw, on the run and desperate, Chander is willing to risk his life to rescue his beloved from the vile world of flesh trade. The plot hardly thickens and the climax doesn't grip you at all.

Inder Kumar's credentials make you assume that, despite the trite-est of title, you are going to watch a 'hatke' love story, a welcome change from the usual boy-meets-girl fare done to death. This is the same old wine in a new bottle, to use a cliché ourselves. Only a fraction of the flick has the by-now-famous stamp of the accomplished director, but, after a point, the weak plot overpowers the director completely.

Stuck with it, the film takes a lot of cinematic liberties to try to be different, and fails again. The part about the dog, which shows more sense and timing than the director himself, is thoroughly indigestible. And a police-informer, who is thrust upon the audience, jars. Even the climax does wee little to perk up matters.

Sanjeev-Darshan's musical score is also a downer. The tunes are cyclical and identifiable, although it must be said that the picturization is commendable. Harmeet Singh's cinematography is eye filling. The locations of Europe make the film look visually affluent. Yet, the placement of songs towards the second half is improper - they look forced in the goings-on.

Bobby and Karishma are their usual selves, nothing spectacular. And to be fair, the film hardly offers any scope for that. Rajiv Kaul - Praful Parekh's comedy punches do their bit, but only in parts. The action scenes, though, are well executed.

Aashiq was never conceptualized as a good movie - it was just a product intended at milking some of the star value of the lead pair. The fans and romance lovers might yet help it break even, but unless you belong to one of the former two groups or are espousing the cause of saving a disaster, keep away. Remember, you earned your money.
Share. Save. Connect.
Tweet
AASHIQ SNAPSHOT

ADVERTISEMENT
This page was tagged for
Aashiq
aashiq full movie bobby deol
ashiq hindi movie
aashiq movie bobby deol
Aashiq hindi movie
Follow @fullhyderabad
Follow fullhyd.com on
About Hyderabad
The Hyderabad Community
Improve fullhyd.com
More
Our Other Local Guides
Our other sites
© Copyright 1999-2009 LRR Technologies (Hyderabad), Pvt Ltd. All rights reserved. fullhyd, fullhyderabad, Welcome To The Neighbourhood are trademarks of LRR Technologies (Hyderabad) Pvt Ltd. The textual, graphic, audio and audiovisual material in this site is protected by copyright law. You may not copy, distribute, or use this material except as necessary for your personal, non-commercial use. Any trademarks are the properties of their respective owners. More on Hyderabad, India. Jobs in Hyderabad.