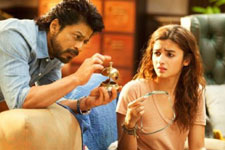 Josh / fullhyd.com
EDITOR RATING
5.5
Performances
Script
Music/Soundtrack
Visuals
8.0
6.0
7.0
8.0
Suggestions
Can watch again
No
Good for kids
No
Good for dates
Yes
Wait for OTT
Yes
A film that dwells on the psyche of the protagonist works only when the audience relates with him/her. When this reviewer walked with his mother into a hall playing English Vinglish, he observed how she being a doctor with an experience of about three decades still managed to be moved by Sridevi's Shashi. Forget that, even the 20-something yours-truly shed a tear or two when Shashi made her little speech at the wedding.

Shinde may not have had the perfect film in English Vinglish but she certainly hit the bulls-eye with drawing empathy for her protagonist. Somewhere you know you are made of the same fibre as Shashi. You vibe to the same rhythms as her. You don't have to be a housewife with limited capacity of English to feel for her.

This, however, is not the case with Dear Zindagi or her protagonist Kaira.

Kaira (Alia Bhatt with yet another natural performance) is a talented cinematographer looking for her big break. She has a family in Goa but keeps rather aloof. Instead, she makes a surrogate family of sorts with her friends (including the maid) in Mumbai. Her love life is a lot shakier than her work, and that is due to the fact that she can't get herself to commit to anyone. Tall and handsome men acting perfectly respectable, if not very sweet, find themselves spurned by her with seeming indifference.

After one such romance-related casualty, she lands at the door of Goan psychologist Dr Jehangir Khan (Shah Rukh Khan), who uses rather unorthodox therapeutic methods to help Kaira reclaim her life back.

Only, it all plays at an arm's length. You experience some difficulty with being very invested in Kaira's life or mind. Part of it is the same as the problem with Ae Dil Hai Mushkil - everyone is pretty, everything looks pretty (Goa is beautifully shot by Lakshman Utekar), and no one looks like they'll stand outside an ATM for hours to lay their hands on a Two Thousand Rupee note. Karan Johar (the producer) doesn't seem to tire of giving us films with these impossibly comfortable lives, but we are beginning to tire of talking about them.

The other part of the problem is that Kaira's life just doesn't possess the gravitas to glue you to your seat for two and a half hours. It becomes something like having a neighbour who has some trouble of the mid-life crisis variety. You have no issues with them having such troubles and you might be supportive of them by suggesting to them an able and insightful therapist. But your involvement ends there; that's not the same thing as investing your money and time into their concerns.

However, regardless of its drawbacks, Dear Zindagi makes a great case for everyone to consider therapy for their emotional troubles. The stigma is brought up and dismantled sensibly. It also helps that the counselor is played by Shah Rukh Khan. This is a role which folks usually write for Aamir Khan (it isn't unlike his Ram Nikumbh in Taare Zameen Par), and that Khan usually turns in effortful and grand performances. He certainly acts well. So much that you are conscious that he's acting well. By contrast, Shah Rukh comfortably slips into this role and draws your attention to the scene rather than to himself.

As we pondered the disconnect we felt for Dear Zindagi, for a while we considered the possibility that it is a gender thing. Perhaps a Kritika Deval or a Zehra Abbas may have drawn more out of this film than a Josh. Perhaps, they might have been better able at communicating Kaira's pathos to us. But that circumvents the fact that firstly Shinde failed at that communication. She is still the sensitive director who can compose wonderful frames, command her music director and editor's talents, and extract lovely performances from her cast. She can still touch your heart. Only, for reasons we couldn't fathom, she does it at an arm's length.
Share. Save. Connect.
Tweet
DEAR ZINDAGI SNAPSHOT 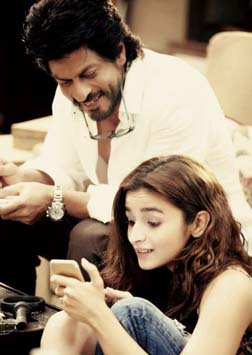 ADVERTISEMENT
This page was tagged for
dear zindagi movie in hindi mp4
dear zindagi movie in hindi
Dear Zindagi hindi movie
Dear Zindagi reviews
release date
Follow @fullhyderabad
Follow fullhyd.com on
About Hyderabad
The Hyderabad Community
Improve fullhyd.com
More
Our Other Local Guides
Our other sites
© Copyright 1999-2009 LRR Technologies (Hyderabad), Pvt Ltd. All rights reserved. fullhyd, fullhyderabad, Welcome To The Neighbourhood are trademarks of LRR Technologies (Hyderabad) Pvt Ltd. The textual, graphic, audio and audiovisual material in this site is protected by copyright law. You may not copy, distribute, or use this material except as necessary for your personal, non-commercial use. Any trademarks are the properties of their respective owners. More on Hyderabad, India. Jobs in Hyderabad.