Veturi Sarma / fullhyd.com
EDITOR RATING
5.0
Performances
Script
Music/Soundtrack
Visuals
6.0
3.5
5.0
6.0
Suggestions
Can watch again
No
Good for kids
No
Good for dates
No
Wait for OTT
Yes
The Tollywood juggernaut rolls on and spits out another one of those masala flicks that employs a thousand people, travels around the globe for its dances and fights and zoom-outs, and delivers an underwhelming experience all over again.

It is especially incredible that our filmmakers come up with ideas like the hero becoming an MLA in a few months. That is perhaps possible given some momentous events happening - however, the hero here is Kalyan Chaturvedi (Nandamuri Kalyan Ram), a typical Telugu movie lead whose claim to fame is marrying off a pair of timid lovers, and who wants to become an MLA to basically land a babe.

So Kalyan's father banishes him from home after his aforementioned escapade with helping a girl get married against her parents' wishes. That might appear harsh, but the girl happens to also be Kalyan's sister - i. e. the same father's daughter. So Kalyan takes off for Benguluru, where he sees Indu (Kajal Agarwal), and quickly falls in love with her and stalks her some.

Meanwhile, Kalyan's brother-in-law (Vennela Kishore) gets him a job in his own office where, in a predictable coincidence, Indu turns out to be Kalyan's boss. This starts off the good old Telugu film romance, that goes on merrily until some goons show up chasing Indu and tell Kalyan that she is not who she says she is.

It turns out that Indu's father Nagappa (Jayaprakash Reddy) wanted to be an MLA all his life, but couldn't succeed. His grand plan is to marry Indu to Gadappa (Ravi Kishen) who is actually an MLA, so that he can at least be called an MLA's father-in-law. How Kalyan gets Indu by becoming an MLA himself to win over her father is what forms the rest of the story. His plan is to make the MLA resign, run in the election against him, and win. It's pretty simple like that.

To its credit, the film does not let its audiences get too bored, and piles in twists and turns at every chance (though the twists can be seen from a mile by anyone who isn't sleeping). Prudhvi Raj, Brahmanandam and Prabhas Sreenu never let any incident pass by without saying something funny, and Kalyan Ram himself is in fine touch leading the farce with a game face. He is at home with the heavy-duty dialogues, has worked on his diction a bit, and looks pretty much switched on throughout the movie.

Posani Krishna Murali gets the role of a rather filthy womanizer that could have been avoided. But if you feel sad for him for that, you have to see the deal Kajal Agarwal is given in the film. The story seemingly revolves around her, but she appears for about 6 minutes in the entire second half excluding the songs. She sees through the film with the two stock expressions she has in her repertoire, and her role is pretty much dazzling in some designer wear when called upon to.

Despite some funny lines and sequences, it is ultimately the writing that lets MLA down. The visuals and the music are purely functional and just according to syllabus, though the makers did miss out the final massy song where the hero and heroine along with a thousand extras on either side dance vigorously in gaudily-lit sets. Other than this very notable exception, MLA follows the formula to the hilt, and comes out just alright. If that meets your standards, you can go right ahead and book your tickets for this.
Share. Save. Connect.
Tweet
MLA SNAPSHOT 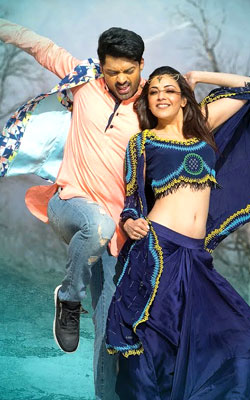 ADVERTISEMENT
This page was tagged for
telugumla
MLA telugu movie
MLA reviews
release date
Nandamuri Kalyan Ram, Kajal Agarwal
Follow @fullhyderabad
Follow fullhyd.com on
About Hyderabad
The Hyderabad Community
Improve fullhyd.com
More
Our Other Local Guides
Our other sites
© Copyright 1999-2009 LRR Technologies (Hyderabad), Pvt Ltd. All rights reserved. fullhyd, fullhyderabad, Welcome To The Neighbourhood are trademarks of LRR Technologies (Hyderabad) Pvt Ltd. The textual, graphic, audio and audiovisual material in this site is protected by copyright law. You may not copy, distribute, or use this material except as necessary for your personal, non-commercial use. Any trademarks are the properties of their respective owners. More on Hyderabad, India. Jobs in Hyderabad.