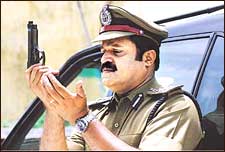 Priyanka Pulla / fullhyd.com
EDITOR RATING
7.0
Performances
Script
Music/Soundtrack
Visuals
NA
NA
NA
NA
Suggestions
Can watch again
NA
Good for kids
NA
Good for dates
NA
Wait to rent it
NA
Cop-and-robber stories in Tollywood read more like cock-and-bull stories, which is why Bharath Chandra comes as such a surprise. Yes, it does have that feel of being a completely parallel universe where crackerjack policemen speak in poetic verse to goons and are oddly favored by gravity. The dubbing from Malayalam has also bonked off on the wayside resulting in distended dialogues that sound like they have been put through time slicing. The dialogues come out jerkily, like a derailing train.

These two factors apart, Bharath Chandra is something of a masterpiece. This sequel to Mollywood hit Police Commissioner brings back the eponymous hero in a tautly woven plot, full of Michael Crichton style layered suspense and clever dialogues that are shouted out rather than spoken.

Bharath Chandra (Suresh Gopi) is an IPS officer who is brought in, along with a team of other police officers, including Hema (Shriya Reddy), to investigate the murder of one Mehdipatnam Baba (Sri Raman). The killing happens when he is out to appear in the court to testify about the riots and tension happening in Machilipatnam, stirred up by one Hyder Ali Hassan (Sai Kumar). Hyder Ali in turn is doing it because he wants the area cleared for his megalomaniacal dream of a township anchored at a private port.

From one suspect to another, Bharath Chandra and team move in cyclical layers till they finally zero in on some highly unlikely villains. Director, producer and writer Renji Panicker clearly has an eye for surprise as he sequentially turns friends into foes. Instead of following the story straight as a string, the script loops and crochets in ways to keep you rapt.

Strong female protagonists and villains are another aspect this movie scores on. From the chain-smoking, scotch-gulping and reasonably pretty IPS officer who is responsible for Mehdipatnam baba's security, to the mistresses-cum-secretaries of villains, they are all there, and in substantial parts. Shriya, looking dusky, and a little uninvolved, moves on from encounter to encounter, while she simultaneously warms up to Bharath's little daughter. Sobhana, in a photograph, plays the dead wife of Bharat, who won the case against him for murdering Mohan Thomas in the prequel movie, and was assassinated for that.

All in all, the whole sequel business has a comic book hero feel to it. Like Phantom to Bangalla, Bharath to Machilipatnam! Songs are blessedly absent, and the running time is close to 100 minutes. Never was an action movie so accessible in Telugu cinema. Like an elegant mathematical proof, it begins with the proposition to expose goons, makes complicated twists and turns, only to end with a graceful bow at QED. And then abruptly, like a power cut, the action stops and credits rolls.

A must-watch as a study in the art of quick, joyful and painless. But for its low glamour quotient, for which it may suffer at the Telugu box office, Bharath Chandra is an absolutely spiffy job.

ADVERTISEMENT
This page was tagged for
Bharath Chandra telugu movie
Bharath Chandra reviews
release date
Suresh Gopi, Shriya Reddy
theatres list
Follow @fullhyderabad
Follow fullhyd.com on
About Hyderabad
The Hyderabad Community
Improve fullhyd.com
More
Our Other Local Guides
Our other sites
© Copyright 1999-2009 LRR Technologies (Hyderabad), Pvt Ltd. All rights reserved. fullhyd, fullhyderabad, Welcome To The Neighbourhood are trademarks of LRR Technologies (Hyderabad) Pvt Ltd. The textual, graphic, audio and audiovisual material in this site is protected by copyright law. You may not copy, distribute, or use this material except as necessary for your personal, non-commercial use. Any trademarks are the properties of their respective owners. More on Hyderabad, India. Jobs in Hyderabad.