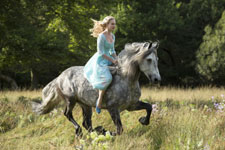 Nupur Barua / fullhyd.com
EDITOR RATING
6.0
Performances
Script
Music/Soundtrack
Visuals
7.0
6.0
6.0
7.0
Suggestions
Can watch again
Yes
Good for kids
Yes
Good for dates
Yes
Wait to rent it
No
The story of Cinderella is a popular and well-known one, but did you know that there are various versions of what happens to the girl covered in ashes? One version, for example, has a wicked stepfather, and another makes her go through the pumpkin coach ordeal for three nights. The glass slipper itself - the one item that can prove Cinderella's identity - has often been replaced, in various representations in various media, with a ring, a bracelet, and in some extreme cases, with sex. The most popular account of the mistreated young girl is the one that Disney and Hollywood have propagated over the years, and this latest release, directed by Kenneth Branagh, sticks to the familiar narration.

Ella (Eloise Webb) is a happy child, and her parents (Hayley Atwell and Ben Chaplin) love her to distraction. Her father travels a lot since he is a merchant, and she is very close to her mother. Since not all happy stories have a happy ending, Ella loses her mother to an illness, and both father and daughter are devastated. Ella, however, tries to make their life as pleasant as possible, practising the virtues of courage and kindness as she grows into a pretty young lady (Lily James).

Ella's father is lonely, however, and marries a widow, the Lady Tremaine (Cate Blanchett), whose late husband was a business associate of his. Ella wants to be happy for her father, but she also knows that he has never got over her mother. Lady Tremaine knows this, too, and she resents Ella for being the perfect daughter while her own daughters, Drisella (Sophie McShera) and Anastasia (Holliday Grainger), behave like the empty-headed, selfish brats that they are.

Lady Tremaine sees her chance to gain an upper hand when Ella's father leaves on yet another trip, and slowly takes over the house. Ella shifts to the attic so that her stepsisters can have her spacious room.

Ella is not unhappy, but she knows something is about to go wrong. It does. Her father passes away without returning home. Lady Tremaine dismisses the household staff, and makes Ella the sole servant. Drisella and Anastasia give her the nickname of Cinderella when they find her covered in soot, and the name sticks.

Fed up of her stepmother's constant taunts, Cinderella goes riding one day only to run into Kit (Richard Madden), who tells her that he is a part of the hunting party led by the prince. What Cinderella does not know is that Kit himself is the prince, the heir to the kingdom.

Kit cannot forget the girl he met in the woods, and throws open to the public the ball in which he is supposed to choose a wife. The king (Derek Jacobi) is dying, and he wants to see his son married. Lady Tremaine does not think Cinderella is suitable to attend the ball, of course, so she leaves her behind. A dejected Cinderella, who wants to enter the palace only so that she can hopefully meet with Kit again, wanders the premises of the house when an old woman appears out of nowhere, and soon announces that she is Cinderella's fairy godmother (Helena Bonham Carter).

You know how the rest of the story unfolds - the pumpkin carriage, the glass slipper, the midnight bell, the hunt for the mysterious girl, and many more cruelties before it gets to the happily ever after. The screenplay plays it safe by sticking to the known and accepted version of the beloved fairy tale.

What the writer has done, very subtly, is taken the story of the helpless young woman and given her some more character that is relevant to the modern world. Cinderella is not perfect, and unlike the cloyingly sweet girl of the previous versions, does have a problem with her stepmother, and cannot bring herself to love her. There are traces of self-pity, too, which is quite normal for a victim such as herself. In short, Cinderella is no martyr. She is just helplessly stuck in a situation not of her doing.

In yet another subtle twist of writing, the stepmother has been given justifications for her behaviour. Here is a woman who trusted the lives of her daughters and herself to the hands of Ella's father, but all he did was reminisce about his dead wife and glory in how perfect his daughter was. Lady Tremaine's insecurity is apparent, and the change in her behaviour from tolerant to cruel stepmother is not sudden. If she cannot have her happily ever after, she does not want anybody else to have it either, especially not Ella, the only person who has made her feel so insignificant.

The script is tightly structured, and plays out pretty well. Some of Cinderella's helplessness may become a little tedious, and the beginning of a love story between Kit and Cinderella could have been a bit more dramatic, or even romantic, but otherwise, the plot points rise and fall exactly where you expect them to. Of course, since we all know the story and we have all seen and read many renditions of it, the element of surprise is virtually non-existent. Which is why the movie is more suitable for younger audiences. There is just one surprise, though - Kenneth Branagh, otherwise known for his tendency for darker stories, is the director!

Lily James plays Cinderella as she should be played, and although her depiction may seem a little dull at times, she has acted with utmost sincerity. Cate Blanchett restrains herself, and her subtlety works. Richard Madden does not have much to do except pine for the lost love of his life, and he may not be the perfect Prince Charming in this movie, but he is endearing, somewhat.

Stellan Skarsgard deserved a lengthier role, because he seems pretty interesting as the bullying Duke (without much reason). Holliday Grainger and Sophie McShera do their bit as the silly stepsisters, but deserved some more screen time to really bring out their shallow characters. Ben Chaplin is wasted, but Hayley Atwell and Helena Bonham Carter bring in plenty of life and sunshine in their respective roles, however short.

The impression you get when you watch Cinderella is that everybody has played it safe. The production design, though not dated, is safe, and effective. It gives you a familiar setting, just what you expect, and there is no time to gasp at or appreciate the finer points. It is strange how Ella's childhood seems to be set at the beginning of the 20th century, but the ball regresses to the 18th century, in terms of colours, settings, and costumes. However, the production design fades into the background, as it should.

The costume department concentrates on emphasising the stark contrast between the Tremaines and Cinderella. The costumes of the other characters are generic, if somewhat confusing, given that they incorporate characteristics of various periods. Lady Tremaine, specifically, is the best dressed of the lot, and, as the narrator points out, nobody can carry off mourning clothes as well as she can.

The cinematography is decent, but the visual effects, however minimal, are done well. The music is standard, no surprises there. The editing is crisp, despite some sequences that do not add much to the story or to your interest in the proceedings.

Cinderalla is a children's movie, a loyal retelling of a popular fairy tale. It may not intrigue the adult, but do take your children or your friends' kids to a show. In a world filled with hatred and violence, a little magic dust and true love may be just the things to indulge in, even for a short while.
Share. Save. Connect.
Tweet
CINDERELLA (2015) SNAPSHOT 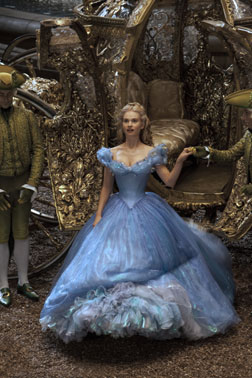 ADVERTISEMENT
This page was tagged for
Cinderella (2015) english movie
Cinderella (2015) reviews
release date
Cate Blanchett, Lily James
theatres list
Follow @fullhyderabad
Follow fullhyd.com on
About Hyderabad
The Hyderabad Community
Improve fullhyd.com
More
Our Other Local Guides
Our other sites
© Copyright 1999-2009 LRR Technologies (Hyderabad), Pvt Ltd. All rights reserved. fullhyd, fullhyderabad, Welcome To The Neighbourhood are trademarks of LRR Technologies (Hyderabad) Pvt Ltd. The textual, graphic, audio and audiovisual material in this site is protected by copyright law. You may not copy, distribute, or use this material except as necessary for your personal, non-commercial use. Any trademarks are the properties of their respective owners. More on Hyderabad, India. Jobs in Hyderabad.