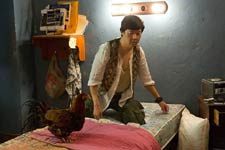 Samrat Sharma / fullhyd.com
EDITOR RATING
4.0
Performances
Script
Music/Soundtrack
Visuals
5.5
3.5
7.0
8.0
Suggestions
Can watch again
No
Good for kids
No
Good for dates
No
Wait to rent it
Yes
The thing about the Hangover movies is that they have embraced a mystery/procedural format, and thrown as much puerile humour at it as it can take. This has resulted in some very funny moments in the first film, and the second film, that was exactly the same plot as the first, except that this time it was in Bangkok.

Director Todd Phillips has decided to drop the hangover from The Hangover Part III, eschewing the mystery box approach for a more straight narrative about "The Wolfpack" locating co-star Ken Jeong and delivering him to John Goodman's big bad, who has their friend captive. Changing formats doesn't seem to have re-invigorated the director or the writers, however, as this is easily the worst of the three Hangover films.

It isn't as offensive as the second one, but it lacks the energy or drive to do anything about it. Over-the-top is confused for funny too often, in a film where almost everyone is sleepwalking.

Bradley Cooper has no energy or effort to part with - this looks more like a contractual obligation to him. Ed Helms as well is in it for a quick pay cheque, applying the least amount of effort in scene after scene.

Only Zach Galifianakis, given some room to stretch beyond his one-note character, this time pairing him with Melissa McCarthy, shows belief in the film, giving his all in scenes where everyone else seems to have checked out.

Ken Jeong is not bad, per se, but exemplifies that making legitimate main characters out of small cameos rarely works out.

Many films have layers. This film has a single, perforated fabric upon which outrageous situations are piled one after the other. As the fabric bursts and tears to leave nothing of value behind, we realize that the Hollywood studio system that arm-twisted, cajoled and threatened its way into making another grab for your wallets is ticking along very nicely indeed.

Where the comedy fails, and the action remains this side of unbelievable, at least the increased budget is shown off nicely - this is one nice-looking mainstream film that isn't a superhero film. I wish, outside of the production values and Galifianakis and McCarthy being amazing, that there was something else to write about, but the truth is that this is a waste of your film time. Avoid as much as you can.
Share. Save. Connect.
Tweet
THE HANGOVER 3 SNAPSHOT 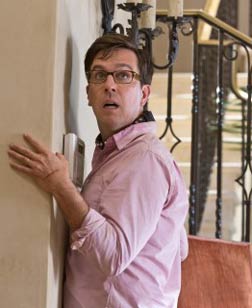 ADVERTISEMENT
This page was tagged for
The Hangover 3 english movie
The Hangover 3 reviews
release date
Bradley Cooper, Ed Helms
theatres list
Follow @fullhyderabad
Follow fullhyd.com on
About Hyderabad
The Hyderabad Community
Improve fullhyd.com
More
Our Other Local Guides
Our other sites
© Copyright 1999-2009 LRR Technologies (Hyderabad), Pvt Ltd. All rights reserved. fullhyd, fullhyderabad, Welcome To The Neighbourhood are trademarks of LRR Technologies (Hyderabad) Pvt Ltd. The textual, graphic, audio and audiovisual material in this site is protected by copyright law. You may not copy, distribute, or use this material except as necessary for your personal, non-commercial use. Any trademarks are the properties of their respective owners. More on Hyderabad, India. Jobs in Hyderabad.