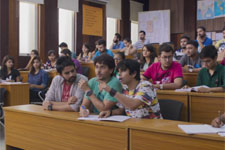 Jaiwantika Dutta-Dhupkar / fullhyd.com
EDITOR RATING
4.0
Performances
Script
Music/Soundtrack
Visuals
5.0
5.0
2.0
6.0
Suggestions
Can watch again
No
Good for kids
Yes
Good for dates
Yes
Wait for OTT
Yes
Most college films make you wonder about the filmmakers' own college lives - and Days Of Tafree is no different. What were these people doing in college anyway to have made such a sad film?

Days Of Tafree has an anecdotal storyline that's almost as ridiculous as its title, and revolves around three bumchums, Nikhil, Vicky and Suresh, who study together. Vicky meets with an accident one day, causing the story(!) to unravel in flashback from the hospital lobby. His college friends, all gathered together in this sombre moment of grief, recollect their good times together.

Through highs and lows, bunked classes, college fests, vendetta fests against their faculty and bitch fests about their parents, the friends stick to each other, make moves on each others' girls, and crack unfunny jokes. Eventually, all the boys propose to their girls, and Vicky recovers in hospital, so it's what might be called a happy ending.

Days Of Tafree looks at young people in 2016 with a cruel, judgemental eye. Young people themselves aren't going to like this film. It's a movie that seeks to make statements about how things are, when they're not, and then it goes on to pass judgement about them. The film is also bizarre and shocking in its portrayal of women. That the director doesn't like faculty and female nerds is obvious - but getting female nerds bashed up onscreen is a new low. Then getting them hitched to the bullies who bash them up is taking things into a very dangerous zone. Days Of Tafree crosses swords with female nerds everywhere - which is something.

The film has a bunch of sour-faced, aging actors playing college kids. If that doesn't grate on your nerves, then their juvenile antics definitely will. If college was where people tried to act cooler than at school, these guys totally fail at that act. They all seem demented, and you wonder why a college has to be the zone for all this. These people have no hobbies, and even their idea of fun is totally unfunny. The film makes a passing reference to Vicky smoking pot, but most of the film's focus is on why Nikhil has given up coffee for life.

Krishnadev Yagnik's writing and direction are really average, and there really isn't anything to write home about in terms of cinematography. The music (Bobby-Imraan, Komail-Shivaan) is terrible.

It's been a while since a film this bad has hit the screens. You can totally skip this one.
Share. Save. Connect.
Tweet
DAYS OF TAFREE SNAPSHOT 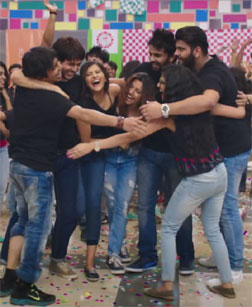 ADVERTISEMENT
This page was tagged for
days of tafree movies in hindi
days of tafree movie in hindi
days of tafree hindi movie
days of tafree
okhatrimazacom days of tafreefullmovie
Follow @fullhyderabad
Follow fullhyd.com on
About Hyderabad
The Hyderabad Community
Improve fullhyd.com
More
Our Other Local Guides
Our other sites
© Copyright 1999-2009 LRR Technologies (Hyderabad), Pvt Ltd. All rights reserved. fullhyd, fullhyderabad, Welcome To The Neighbourhood are trademarks of LRR Technologies (Hyderabad) Pvt Ltd. The textual, graphic, audio and audiovisual material in this site is protected by copyright law. You may not copy, distribute, or use this material except as necessary for your personal, non-commercial use. Any trademarks are the properties of their respective owners. More on Hyderabad, India. Jobs in Hyderabad.