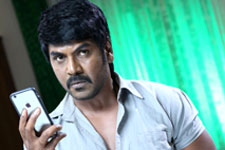 Swaroop Thotada / fullhyd.com
EDITOR RATING
6.0
Performances
Script
Music/Soundtrack
Visuals
7.0
5.0
5.0
6.0
Suggestions
Can watch again
No
Good for kids
No
Good for dates
Yes
Wait to rent it
Yes
Raghava Lawrence is now the "mass" hero whose entry on screen mandates hoopla no less than that of a Rajinikanth or an Ajith. In fact he claims he is the mini version of the quintessential Superstar who he blatantly imitates. He calls himself "chinna Kabali" in his entrance song, in which he dutifully sermons his fans on the meaning of life and the beauty of being charitable.

Indeed, wouldn't life be so much simpler if we simply looked up to our matinee idols for life lessons? How lost would we be without their enlightening entrance songs! However, if one actually listens to the lyrics, they would stumble upon such ironies as when Lawrence decries the publicity-garnering charitable deeds of celebrities while he himself flaunts his altruism by bringing the physically-challenged dancers he never forgets to highlight in every film of his.

What redeems this guy despite this tedious bloated self-image is his entertaining act. He knows how to put up a show, and we have got to give him that. While all our star-kids are asininely stumbling to get the "mass hero" act right, Lawrence makes it look so easy. All you have got to do is be a little confident and enjoy what you do. Sivalinga not only employs the showboating of its leading man, but also knows when to stop and focus on the story.

So Sivalinga (Lawrence) is a CB-CID officer who comes across a murder case that is made to look like a suicide. A Muslim cook Raheem (Sakthivel Vasu) who specializes in biryani is thrown off a moving train, and everyone but his fiancé Bharathi (Urvashi) believes it to be a suicide. Bharathi somehow gets the case reopened even after the court brushes her doubts off as mere speculation. The reopened case ends up with Sivalinga, and the stage is set for him to go full Sherlock Holmes.

However Raheem either doesn't have enough trust in the investigative capabilities of police officers - or maybe he wants to see how he looks in the customary white-paint makeup of ghosts. So he decides to be a ghost, and haunts the house Sivalinga and his wife Satya (Ritika Singh) live in, and there we go with the much-awaited jump scares and the associated spooky laughs.

Sivalinga isn't keen on being plausible, but that's understandable - it's a ghost story after all. So instead it focuses on being engaging. It saves all its plot-twists (however bizarre they are) for the ending to keep you wondering throughout. However it requires that you keep your brain functioning at a minimum so as to let the plot-holes slip away from your notice and also to not figure out things faster than the hero can, and to sail along with the fun elements.

Sivalinga isn't as much fun as Kanchana. Lawrence repeats his fear-of-ghosts cliché and it somehow works again, but the humour doesn't detonate like it did in Kanchana. The film ticks the entire checklist of horror-comedy clichés but manages to pull off only a few - even horror-comedies aren't immune to the monotony of repetition.

Ritika Singh gets the possessed act right, and it helps. Urvashi entertains. Vadivelu appears after a long time and manages to bring some laughs. Thaman's songs are perfunctory and his background score is unremarkable. The cinematography is fine barring the Dutch angles, but the genre being horror, the film could have done without the explosive colours.

Sivalinga is not a remarkable film by any stretch of sense, but that's not what it aims to be. It delivers more or less what it promised in the promos. And if you judge a movie by what it promised and what it delivered, you won't have many complaints with this film. However you might not find compelling reasons why you should catch this one in this summer heat unless the lack of better alternatives can count as a reason.
Share. Save. Connect.
Tweet
SIVALINGA SNAPSHOT 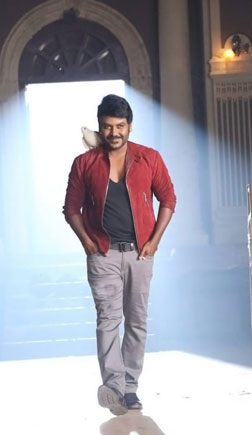 ADVERTISEMENT
This page was tagged for
Sivalinga telugu movie
Sivalinga reviews
release date
Raghava Lawrence, Ritika Singh
theatres list
Follow @fullhyderabad
Follow fullhyd.com on
About Hyderabad
The Hyderabad Community
Improve fullhyd.com
More
Our Other Local Guides
Our other sites
© Copyright 1999-2009 LRR Technologies (Hyderabad), Pvt Ltd. All rights reserved. fullhyd, fullhyderabad, Welcome To The Neighbourhood are trademarks of LRR Technologies (Hyderabad) Pvt Ltd. The textual, graphic, audio and audiovisual material in this site is protected by copyright law. You may not copy, distribute, or use this material except as necessary for your personal, non-commercial use. Any trademarks are the properties of their respective owners. More on Hyderabad, India. Jobs in Hyderabad.