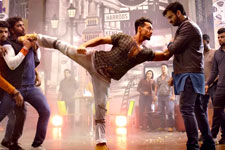 Kritika Deval / fullhyd.com
EDITOR RATING
4.0
Performances
Script
Music/Soundtrack
Visuals
5.0
3.0
4.0
5.0
Suggestions
Can watch again
No
Good for kids
Yes
Good for dates
No
Wait to rent it
Yes
This writer has not watched Baaghi or Baaghi 2, and did not have too many expectations of Baaghi 3 - just a vague feeling of Tiger Shroff-induced "ugh!" that she tried to set aside, because professionalism, impartiality, yada, yada, yada. Upon having sat for nearly two and a half hours of Shroff using his unrelenting himbo-ism to eradicate terrorist activity in Syria, this writer is just very, very confused regarding the very existence of Baaghi 3.

The story begins with alpha DudeBro™ Ronnie (Tiger Shroff) beating the crap out of someone who tries to bully his beta older brother Vikram (Riteish Deshmukh), and then posing for an inordinate amount of time as the sun highlights his musculature in an aesthetically pleasing manner, all while his entire basti cheers for him in a very '80s way. This scene is somehow the prelude to Vikram, who is apparently a total wuss, becoming a useless cop with a difference. He's a useless cop who totally owns it.

Then it turns out that there are kidnappings happening, and somebody rather dangerous (and with a very bad sense of humour) with ties to Syrian terrorists is responsible, and Vikram might actually have to do his job. Not to worry, Beta Bro! It's Rambo Ronnie to the rescue!

We realise that we are using rather a lot of hyperbole in our descriptions. This is not a film that lends itself to moderation and mildness.

For example, we couldn't just tell you of the scene where Ronnie kills many terrorists and rescues kidnapping victims. It would not be honest. We would have to describe the utterly lurid red lighting suffusing what is supposed to be the lair of an ISIS-like terrorist organisation. There are lamps with actual fire in wall sconces. The villains are real-life cartoon characters who seem to just sort of line up in different patterns for Shroff to flex his muscles at them. At the end of it all, when Ronnie bows out so Vikram can take credit for his heroics, all the victims, who have up until that moment been trussed up like a bunch of geese, magically break free from their bindings so they can cry at Vikram and try to touch his feet.

This film has two saving graces - Tiger Shroff's increasingly small body coverings, and the fact that there are moments where we can't tell if the whole thing is satire or not. Shroff does not even make the pretence of acting. Riteish Deshmukh's basic competence as an actor ensures his character at least stays consistent through the vagaries of the plot. Shraddha Kapoor and Ankita Lokhande are there to also look shiny but very, very dim right alongside Shroff. We cannot stress enough the shiny but dim quality of their characters. The rest of the actors take the cheesy quality of the whole thing and run with it.

The action, the dialogue, the plot progression, the "romance"... every major aspect of this film seems to borrow from the worst of every decade of Hindi cinema, with the last of the inspiration apparently stopping at the early '90s.

Since we like to be honest with you guys, we'll tell you that some people laughed pretty hard at some of the scenes that made us want to stab ourselves in the ears. Maybe this movie is like that one blue/black or gold/white dress that was basically the whole internet a few years ago, and once you see it as funny rather than cringe you can't unsee it. So we'll invite you to take your chances, but preferably at home and with some sort of intoxicant at hand. 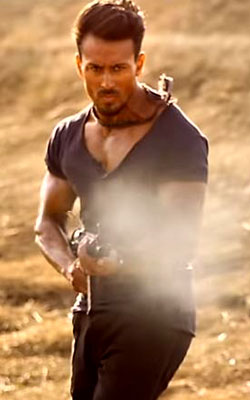 ADVERTISEMENT
This page was tagged for
baaghi 3 rent or but opption
Baaghi3
baaghi 3 in hyderabad
baaghi 3 review IN HINDI
Baaghi 3 hindi movie
Follow @fullhyderabad
Follow fullhyd.com on
About Hyderabad
The Hyderabad Community
Improve fullhyd.com
More
Our Other Local Guides
Our other sites
© Copyright 1999-2009 LRR Technologies (Hyderabad), Pvt Ltd. All rights reserved. fullhyd, fullhyderabad, Welcome To The Neighbourhood are trademarks of LRR Technologies (Hyderabad) Pvt Ltd. The textual, graphic, audio and audiovisual material in this site is protected by copyright law. You may not copy, distribute, or use this material except as necessary for your personal, non-commercial use. Any trademarks are the properties of their respective owners. More on Hyderabad, India. Jobs in Hyderabad.