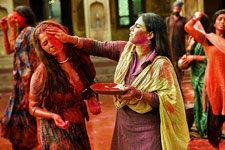 Indranil Majumdar / fullhyd.com
EDITOR RATING
5.0
Performances
Script
Music/Soundtrack
Visuals
7.5
6.0
6.5
8.0
Suggestions
Can watch again
No
Good for kids
No
Good for dates
No
Wait for OTT
Yes
Remakes are tough to do, especially when the remake is of a film that was a critical and box-office success. Begum Jaan is a remake of the 2015 Bengali film Rajkahini, but sadly isn't nearly as good as the original.

What brought about the film's inception is exactly what brings about its downfall. Begum Jaan tries a little too hard to be Rajkahini, but it has neither the soul of the original intact nor its narrative intricacies. That, though, is a huge surprise to be honest. For, the films have the same director in Srijit Mukherji. So what could have changed so drastically?

The film's Achilles' heel becomes the language barrier that it needs to overcome and transcend. Srijit Mukherji wrote Rajkahini, and he felt at home writing in Bengali. However, he has had to outsource the task of writing the Hindi dialogues for Begum Jaan. Kausar Munir ends up writing dialogues for scenes for which just silence could have worked. In Begum Jaan's case, verbiage over brevity does not work at all.

The backdrop of the story is the harrowing event of the Partition of India, and more specifically the events following the publishing of the Radcliffe Line. Cyril Radcliffe's epochal decision, which led to the formation of two separate nations, is shown at its crudest. The story of Begum Jaan is not about fear-ridden refugees or the members of the Indian National Congress and the Muslim League. The story is about 10 prostitutes and their revered madame Begum Jaan.

The Radcliffe Line passes right through the middle of the residence that houses the 11 women. The film then follows the trials and tribulations of the women as they are pitted against spineless bureaucrats and calculating individuals. What is worse is that their residence faces the threat of demolition owing not just to external factors but from some of the people who reside in it or frequent it.

Begum Jaan is Mukherji's way of paying tribute to the path-breaking works of Ismat Chughtai and Saadat Hasan Manto. The film also draws heavily from Shyam Benegal's Mandi in aspects of plot and attire. What it misses though is the dexterity that accompanies the novelty in thought in the others.

But Begum Jaan is not a bad film. There are loopholes and anachronisms, yes. But what it lacks in dialogue writing, it more than compensates for in audacity. The film makes a wonderful statement for female empowerment. Begum Jaan the character is an apostle of pragmatism. Her past is shrouded by horrible events, but she seizes her present right by the collar. Words such as "azaadi" and "partition" mean nothing to her. She is a self-effacing woman who stays in the background but explodes when her "dhandha" is damaged. For her, there is no stigma attached to her profession, and everyone is the same irrespective of caste, creed, race and religion. Begum Jaan actually feels like Srijit Mukherji's alter ego, a character that helps him voice an opinion he feels strongly about.

Balan is brilliant as Begum Jaan, and will have you in awe. She betters Rituparna Sengupta's act as Begum Jaan in Rajkahini by a good mile. Gauhar Khan (as Rubina) and Chunky Pandey (as Kabir) pull their roles off with aplomb. And Ashish Vidyarthi and Rajit Kapoor are the anchors of the ship. Vidyarthi (as Harshvardhan) and Kapoor (as Ilias) are childhood friends divided by religion. Their characters are the most symbolic of the events happening within the film. This wasn't just a partition of nations, this was also a tearing apart of kinship, and both Harshvardhan and Ilias have you invested you in their respective predicaments.

Another note-worthy role is that of Naseeruddin Shah. Shah is a towering figure in almost every film that he is a part of, and he is a treat to watch in Begum Jaan. The scenes featuring Balan and Shah will remind you of Ishqiya, and they feed quite well off each other.

The music ranges from unsavoury to good. Anu Malik tries but you wish Srijit Mukherji had brought the composer of Rajkahini, Indraadip Das Gupta, on board. The background score is mostly jarring, and leaves you wondering how much more palatable it would have been if it were just replaced by classics from the days of the partition.

Cinematographer Gopi Bhagat does a commendable job. He sticks to using sepia tones, and that works well given the period the film is set in. The shots where Begum Jaan is equated to the likes of Razia Sultan and Rani Laxmibai are remarkable.

There is a particular scene where Nehru's "Tryst With Destiny" speech plays out on the radio, and the inmates of the cursed house celebrate. It's a fantastic scene, and Mukherji deserves kudos for retaining it from the original.

Very few narratives in India cinema over the years have been as disturbing and arresting, and Begum Jaan is a good example of how history changes when perspective does. It is also a great example of how armchair politicians, almost like a wizard weaving his wand, determine the fate of many.

This, though, isn't the film you're advised to rush to the theatres for. If you've seen the original or intend to at some point, give Begum Jaan a miss. Although, a first-rate Vidya Balan act is reason you shouldn't.
Share. Save. Connect.
Tweet
BEGUM JAAN SNAPSHOT 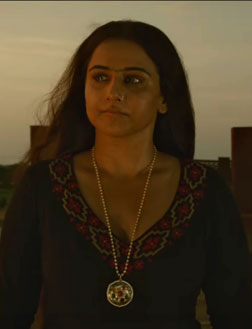 ADVERTISEMENT
This page was tagged for
Begum Jaan hindi movie
Begum Jaan reviews
release date
Vidya Balan, Gauhar Khan
theatres list
Follow @fullhyderabad
Follow fullhyd.com on
About Hyderabad
The Hyderabad Community
Improve fullhyd.com
More
Our Other Local Guides
Our other sites
© Copyright 1999-2009 LRR Technologies (Hyderabad), Pvt Ltd. All rights reserved. fullhyd, fullhyderabad, Welcome To The Neighbourhood are trademarks of LRR Technologies (Hyderabad) Pvt Ltd. The textual, graphic, audio and audiovisual material in this site is protected by copyright law. You may not copy, distribute, or use this material except as necessary for your personal, non-commercial use. Any trademarks are the properties of their respective owners. More on Hyderabad, India. Jobs in Hyderabad.