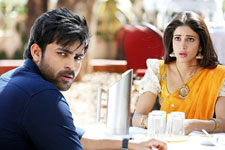 Josh / fullhyd.com
EDITOR RATING
3.5
Performances
Script
Music/Soundtrack
Visuals
5.0
2.0
5.0
8.0
Suggestions
Can watch again
No
Good for kids
Yes
Good for dates
Yes
Wait to rent it
No
The office told me that Vaitla apparently made Mister with a lot of "kasi" following the debacles of Bruce Lee and Aagadu. Kasi is a difficult word to translate. A cross of aggression and vengeance that is usually the emotion attributed to wounded tigers.

So we went looking for the "kasi". 25 minutes into Mister, we got nothing. If anything, Rahul Dravid demonstrated more "kasi" in having us quit smoking (we swear, one of these days we'll pick up smoking just so we can quit it for Dravid). Vaitla seemed more like he was sleeping in the cockpit while K V Guhan (the cinematographer) and Nischay Niyogi (the stylist) took care of the autopilot.

Mister is a very, very pretty film. The most watchable second generation Mega family member. The cute girl who looks comfortable simply because she's wearing stuff that she'd usually wear. The pretty girl who looks uncomfortable simply because she's wearing clothes that girls torture themselves with in weddings. The tourism brochures of Spain. The CGI enhanced lands of Karnataka. And so on.

Everything looks so beautiful that Mister looks like a polished gem. The key phrase being "looks like". Because the film is no gem. It's not even a stone. It crumbles under the slightest pressure, and you'll walk home hoping it's just hardened clay and not something you need to wash your shoes for.

We wish we were kidding. We wish there was something in it to actually enjoy this film. We wish the hero's family members made us love them. We wish the villains made us hate them. We wish the Oopiri spoof was more than just insulting Raghu Babu (and disabled people in general). We wish Gandhian values didn't need to be made fun of. We particularly wish the track with "30 years" Prudhvi as an incompetent director stopped trying to make fun of other directors and led Sri No Vaitla to reflect on his own work. How does someone make Nee Kosam and Anandam and not be able to create a single ripple of emotion in a film that runs for 2 hours and 40 minutes? Oh, we really wish Vaitla was kidding.

So all there are to this film are some good looks, a few scattered laughs and one hummable song. That's about it. The lead actors haven't got much to do. They look pretty, say some tired lines, and wait for the director to say cut. The comedians fare marginally better actually trying to justify their pay before the director says cut.

And the story, you ask? We were hoping you wouldn't. Anyway, if you'll pardon the spoilers, here we go:

There's a village whose leader is decided every decade in a karra saamu contest. Nasser wins regularly. But Bharani doesn't want him to win. He brings in Nikitin Dheer for the next bout. Meanwhile, Varun Tej is in Spain with a family that seems to believe that Spain is a suburb next to Manikonda. Varun Tej doesn't like his grandpa (Nasser). He likes Hebah Patel. Hebah Patel likes him but doesn't love him. She loves someone else called Siddharth. She goes back to India but Siddharth doesn't love her. Hebah Patel's brother begs with him but to no avail. She calls up Varun Tej to cry. He comes running to India to ask Siddharth about it. Siddharth tells him that Hebah Patel's brother roughed him up and made him lie to Hebah Patel.

Varun Tej whisks away Siddharth and his family to a safe zone and is going to pull out Hebah Patel from her brother's house. Somewhere on the ghat roads Prudhvi and his assistants break a beer bottle. Later Varun Tej's car tyre blows out on the glass pieces and he has to take a bus. Lavanya Tripathi comes running and boards the bus. She doesn't know what a cellphone is or that a film called Chandramukhi got made. She gets drunk because Prudhvi tells her that the vodka he is drinking is coconut water. She gets lost and Varun Tej saves her. Now she's going with him and even Prudhvi and co are going with him.

We believe you're beginning to lose trail. No? You're still with us? Okay...

Varun Tej and Satyam Rajesh manage to pull out Hebah Patel from her house. She, Tripathi, Prudhvi, his assistants, and everybody under the sun are now running from Hebah Patel's brother. They come to a bridge where they are confronted by goons. Varun Tej fights. Hebah Patel undergoes a ridiculously improbable accident and falls over the bridge and holds on to a vine waiting for Varun Tej to come save her. He promptly drops down holding another vine and saves her, by which time they realise that the goons were after neither of them. They politely pick up Lavanya Tripathi and leave. Varun Tej now finds a reason to go after Tripathi who is the princess of the Vijayanagar kingdom which was untouched by the Indian government and continues to exist in a primitive fashion where the king sits on a CGI mountain and delivers verdicts.

Now we believe you don't want to follow this story anymore. We wondered why Vaitla hadn't felt that way. We wondered about it and figured, maybe all that "kasi" he had - that aggression and vengeance - was not towards his craft. Maybe, just maybe, it was towards his audience.
Share. Save. Connect.
Tweet
MISTER SNAPSHOT 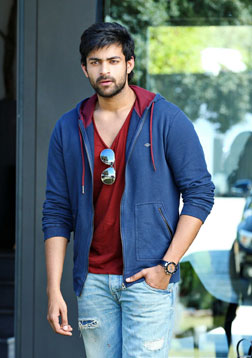 ADVERTISEMENT
This page was tagged for
Mister telugu movie
Mister reviews
release date
Varun Tej, Lavanya Tripathi
theatres list
Follow @fullhyderabad
Follow fullhyd.com on
About Hyderabad
The Hyderabad Community
Improve fullhyd.com
More
Our Other Local Guides
Our other sites
© Copyright 1999-2009 LRR Technologies (Hyderabad), Pvt Ltd. All rights reserved. fullhyd, fullhyderabad, Welcome To The Neighbourhood are trademarks of LRR Technologies (Hyderabad) Pvt Ltd. The textual, graphic, audio and audiovisual material in this site is protected by copyright law. You may not copy, distribute, or use this material except as necessary for your personal, non-commercial use. Any trademarks are the properties of their respective owners. More on Hyderabad, India. Jobs in Hyderabad.