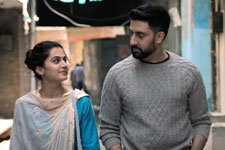 T J Reddy / fullhyd.com
EDITOR RATING
7.0
Performances
Script
Music/Soundtrack
Visuals
9.0
6.0
8.0
8.0
Suggestions
Can watch again
Yes
Good for kids
No
Good for dates
Yes
Wait to rent it
No
The tagline for Manmarziyan is "Love isn't complicated. People are complicated." The same sentiment can be applied to cinema as well. Movies aren't complicated. If one turns a camera on at a traffic signal and leaves it to film the comings and goings of that intersection for 2 full hours, who's to say it's not a film?

That's where the people come in. People are complicated. People have thoughts, feelings, emotions, memories, wants, needs and a rich history of stories they grew up with. People superimpose their unique identities over art in an attempt to make sense of what someone else's view of the world is. Hence, writing a story is complex. Framing a shot is complex. And making and watching cinema is complex. With Manmarziyan, director Anurag Kashyap and writer Kanika Dhillon attempt to demystify some of the more primal simplicities and evolutionary complexities of human romance.

Set in Amritsar, Manmarziyan paints a vivid picture of the life of Rumi (Taapsee Pannu). She is a former hockey player turned hockey equipment saleswoman, and is a loud, brash, free-spirited, anti-authority redhead who is in love with Vicky (Vicky Kaushal). Vicky is a DJ. DJ Sandzz to be exact. When he isn't working to leave his frankly delible imprint on Punjab's music scene, DJ Sandzz spends time making passionate Fyaar (coitus) to our leading lady.

Soon, the red-blooded duo is caught in action by the girl's family, and contrary to popular protocol, Vicky is tasked to prove his commitment to Rumi by means of an engagement. Meanwhile, Robbie (Abhishek Bachchan) enters the fray. Robbie is a London-based banker who is soft-spoken and even-tempered. He is the son-in-law every middle-class Indian parent dreams of. He is scheduled to meet Rumi. She needs to make a choice between a man she picked, and a man picked for her. Simple enough.

Rumi wants to be with Vicky. Vicky doesn't want to commit as he isn't ready. Robbie wants to commit but Rumi isn't passionate about him. Vicky doesn't want Rumi to move on with her life because he still wants to have her with him. Rumi wants to be with Vicky because their passion is undeniable, but can't stay with a man who never seems to have a plan or the sense of responsibility required to craft a plan. Robbie is well-planned and well-settled and can offer a life of comfort for Rumi. Rumi wants the life Robbie is ready to offer but can't will herself into accepting it because Robbie doesn't force her to make a choice. He lays his chips on the table and tasks Rumi to make her own life choices. Rumi's head, heart and loins want different aspects of both men, and hence we arrive at COMPLICATION.

Anurag Kashyap's latest offering revels in complication. The internal and external conflicts of each of the leads form the crux of the narrative. Every one of them is a practitioner of the dark arts of courtship, and none of them is fully absolved of all their sins by the benevolent hand of screenwriting. But this is an Anurag Kashyap film. We knew that.

What we are also used to at this point is Kashyap's love of excess. While his excess in technical finesse and mastery of the cinematic medium are welcome, what is not is his love of excessive story-telling. In the second half, Manmarziyan devolves into an endless loop of recycled story beats and plot threads. While the film attempts to illustrate the paradoxical nature of young love and lust and the frustration that accompanies them, the script tapers to an approach much tamer and well-worn than its starting effort at setting up the dominoes.

However, tame isn't a word you would use to describe Pannu's Rumi. She embodies all the character traits associated with the cinematic depiction of a manic pixie dream girl, but is also a fully formed woman of her own. She may ride a Royal Enfield, but is also petrified of being yelled at. She may want raw and intense sex, but is also in search of a life that affords her the former without skimping on the basic necessities required for human survival. These are but a few examples of the layering afforded to Rumi, and this helps Pannu exercise her full range as an actor while embodying a complex character.

Vicky Kaushal and Abhishek Bachchan aren't too far behind either. While their characters seem one-note at first glance, the character development is done more through subtle directing touches than through words. Robbie taking off his turban every time he smokes a cigarette or Vicky purchasing a shirt that matches the helmet decals of his beloved are all subtle hints at deeper motivations lurking under the surfaces of these characters. Bachchan's subdued acting style and Kaushal's infectious energy infuse the men with a sense of purpose and identity that most films tend to overlook when etching their male leads.

Kashyap's attention to detail is ever-present in both his care for the characters and the world they inhabit. For example, delicate choices in visual story-telling such as Rumi running towards a sea of nothingness through the course of the film and her running towards something at the end of it come from a director with a vision and a genuine love of the craft. Thanks to DOP Sylvester Fonesca and an excellent score and soundtrack by Amit Trivedi, Kashyap's Amritsar is a city bustling with a loud personality subdued by cramped spaces and over-population.

The city mirrors Kashyap's movie in more ways than one. The film too has a loud personality with big ideas, and like its characters wants its time to explore those ideas until it settles down. However, bustling cities don't have time to spare for self-destructive youths unless the self-destruction is as compelling as a 60-car pile-up on a national highway. Manmarziyan is only as compelling as a mere 3-car pile-up, and while the implications are very real, the story lacks the added oomph to grab every available eyeball.
Share. Save. Connect.
Tweet
MANMARZIYAAN SNAPSHOT 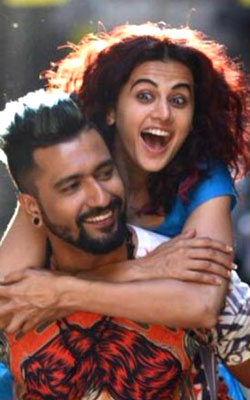 ADVERTISEMENT
This page was tagged for
Manmarziyaan hindi movie
Manmarziyaan reviews
release date
Vicky Kaushal, TaapseePannu
theatres list
Follow @fullhyderabad
Follow fullhyd.com on
About Hyderabad
The Hyderabad Community
Improve fullhyd.com
More
Our Other Local Guides
Our other sites
© Copyright 1999-2009 LRR Technologies (Hyderabad), Pvt Ltd. All rights reserved. fullhyd, fullhyderabad, Welcome To The Neighbourhood are trademarks of LRR Technologies (Hyderabad) Pvt Ltd. The textual, graphic, audio and audiovisual material in this site is protected by copyright law. You may not copy, distribute, or use this material except as necessary for your personal, non-commercial use. Any trademarks are the properties of their respective owners. More on Hyderabad, India. Jobs in Hyderabad.