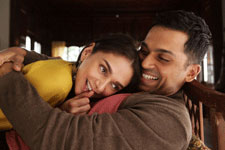 Swaroop Thotada / fullhyd.com
EDITOR RATING
6.0
Performances
Script
Music/Soundtrack
Visuals
7.0
6.0
7.0
8.0
Suggestions
Can watch again
No
Good for kids
Yes
Good for dates
Yes
Wait for OTT
No
Varun (Karthi) is an Indian Air Force squadron leader who flies his planes like he leads his life: non-chalant, showy, brave, stubborn, brutish and precise. He calls himself VC, and almost hides behind the abbreviation. He deflects all serious questions with clever poetic retorts and sports Aviator glasses all the time as if to conceal his angst behind the cool demeanour and cockiness. Though the smug smile that he wears frequently gives away the inner mutilation, he never fails to startle you when he erupts all of a sudden.

His romance with Leela Abraham (Aditi Rao Hydari) is what explores the troubled landscape of his life, haunted by his own demons. A civilian doctor in Srinagar, Leela chances upon VC when he gets injured in a road accident while he is being his usual reckless self and ends up in her hospital. Flirtation ensues in typical Mani Ratnam style and sparks manifest almost instantly.

Leela contrasts VC's confident advances with dainty reserve initially. She harbours deep-seated romantic notions about life and destiny, and puts up a composed persona, but is helplessly rendered swooning as soon as she in VC's vicinity.

A few minutes into their romance, Mani Ratnam subtly throws a hint as to why these opposite poles attract. VC takes Leela to the heart of the Himalayas and gives her a minute to behold the wonder. But they have to leave soon as he anticipates a snow storm in a few minutes. VC tries to take her back but she is too smitten by the view to care or listen to him. She stubbornly hushes his concerns until his patience wears thin. We witness a role-reversal here where she is the stubborn romantic that trades danger for thrill and he is the reasonable one with a grip on the practical.

Perhaps VC is the epitome of what Leela could be if she could shed her inhibitions. Perhaps that's why it upsets her when he tries to put her back in her place. She resists him asking, "What can you do if I say I don't want to come?" "I will drag you out of here if I have to," he rebuffs even more pungently. This boorishness puts her off instantly, but in less than a minute, she is all over him. This intriguing chemistry and friction between these volatile characters is what Cheliya is keen on.

The film works more as a character study than as a story. There is something about VC that Leela can't resist, even after their relationship mutates into full-blown abuse. VC's seemingly misogynist treatment of Leela isn't sourced from his narcissism. His actions look almost sadistic, clearly egotistic and borderline psychotic, but he is more of a masochist than a sadist, for he is as much a victim of his own demons as anyone upon whom they are unleashed.

You are given a very short glimpse of how his dysfunctional family might have fueled his angst, in which he confronts his father when the latter threatens his mother. And it is this fear and resentment that he has for his father inside him that eats him away from the inside. In a particularly chilling scene in the second half where he humiliates Leela in front of everyone, we see him playfully but violently twisting her arm. It appears as if he is trying to push her till she breaks and see if she returns. And she does actually.

This granular study of VC's character is detailed but not expository. But curiously this incisive scrutiny is lacking when it comes to Leela's characterization. We know nothing of her past or anything about her outside of the context of her infatuation with VC. She functions only at the receiving end, and this makes the film's exploration of its characters a one-sided affair.

Mani Ratnam tries to fill this gap with his own romantic explanation that it is love that ties together these unfortunate souls that can't help but burn each other. But this idealistic postulate appears out-of-place in this tale of flesh-and-blood characters. We have no choice but to buy into his notions as we are deprived of even a peek into Leela's psyche. Her only imperfection is her persistent love for VC, and it makes you feel that all her fragility is not a way of establishing contrast but merely a target to direct VC's masochism to.

VC is captured by the Pakistani army in the first few minutes of the film, and from there the narrative switches between the present and the past as if to accommodate suspense: a trick which he deftly pulled off in Sakhi. His capture and torture in Rawalpindi prison mark the beginning of his transformation. Evidently it is the prospect of death that catalyzes his rebirth, but that is left for you to figure out. This change is more impulsive than evolutionary, and that doesn't make for a satisfactory ending.

The Sakhi-style parallel narration feels age-old and doesn't enhance the screenplay in any real way. It feels just like a gimmick. Also the whole Kargil track pales out for it doesn't contribute to the main conflict. The prison escape scene and the succeeding chases feel perfunctory. Mani Ratnam intends VC's run across countries as a soul-stirring odyssey, a saga, but it is hard to enthusiastically agree. At some level you know he ultimately returns, and also that the track is too casually written to invite your emotional investment. I am aware that this review sounds more like an analysis than a review, but how many films lend us this luxury?

Ravi Varman's camera squeezes every last possible drop of beauty into the frame, and he is ably aided by the locations and competent production design. Every frame is a beauty to behold. This visual presentation is dipped in Rahman's soulful melodies to give you an almost exotic setting. Ratnam takes care that this deliberate beautification and visual poetry doesn't overtake the narrative like it did in Raavan. But the question arises whether this story about mutilated souls needs to be set in a world permeated by visual splendour. But hey, who are we to question?

Karthi somehow falls short. He depicts the contrasts in his psyche separately, but a more competent or perhaps a better cast actor might have hinted the potential mood swings even when they don't erupt. Karthi passes off a smug smile as layered complexity. He is outperformed by Aditi whose expository eyes brilliantly portray anger, disappointment, love, sorrow and wonder. And she looks a million bucks as well. RJ Balaji and Shraddha Srinath are underutilized.

Cheliya is a difficult film to sit through, not because it is an incompetently made film but because it chooses a difficult subject and revolves around an unlikeable central character. There was audible restlessness in the cinema, and many walked away in the middle. So be wary - this one is not for everyone.
Share. Save. Connect.
Tweet
CHELIYAA SNAPSHOT 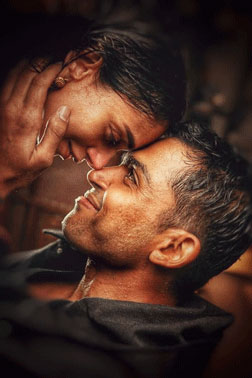 ADVERTISEMENT
This page was tagged for
Cheliyaa telugu movie
Cheliyaa reviews
release date
Karthi, Aditi Rao Hydari
theatres list
Follow @fullhyderabad
Follow fullhyd.com on
About Hyderabad
The Hyderabad Community
Improve fullhyd.com
More
Our Other Local Guides
Our other sites
© Copyright 1999-2009 LRR Technologies (Hyderabad), Pvt Ltd. All rights reserved. fullhyd, fullhyderabad, Welcome To The Neighbourhood are trademarks of LRR Technologies (Hyderabad) Pvt Ltd. The textual, graphic, audio and audiovisual material in this site is protected by copyright law. You may not copy, distribute, or use this material except as necessary for your personal, non-commercial use. Any trademarks are the properties of their respective owners. More on Hyderabad, India. Jobs in Hyderabad.