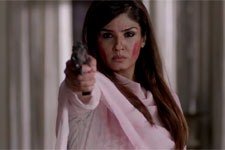 Indranil Majumdar / fullhyd.com
EDITOR RATING
5.5
Performances
Script
Music/Soundtrack
Visuals
7.0
5.0
4.5
6.0
Suggestions
Can watch again
No
Good for kids
No
Good for dates
No
Wait to rent it
Yes
Viewing Maatr is like driving a car on an extremely familar route to the destination. The lanes and cul-de-sacs are all quite known. Maatr is Raveena Tandon's proper comeback film (she had just a cameo in Bombay Velvet), and sadly a thoroughly disappointing one.

Women-centric films are undeniably the need of the hour. But there is a difference between making a point and force-feeding it to the audiences. Sadly, Maatr gradually does the latter. Tandon, who plays a teacher, is conveniently harping on about Raja Ram Mohan Roy and his struggles for women empowerment to her students. The aim for a film centred on a cause should not be about making copious verbal statements but in using the art form - i. e. cinema - and all its tools to make a case for the cause.

The film follows five youngsters who, shrouded in a haze of drugs and liquor, gangrape Vidya Chauhan (Raveena Tandon) and her daughter Tia (Alisha Khan). A key plot point is that one of the men Apurva (Madhur Mittal) is the son of a minister. The second that bit of information unfolds on screen, you know where the film is headed. It's Kaabil all over again.

Except that it's not nearly as obnoxious. Here the women have voices. Vidya does not brood over how her spouse will be affected in the wake of what she has had to suffer. Refreshingly, she is unabashedly all about herself, and anything who thinks otherwise can go take a hike. In general, the film for large parts feels like an elegy written in memory of the lives of women lost in the mire of rape and harassment. Its intentions are honest, and that is what partly saves it from the abysmal execution.

Only partly, though. Director Ashtar Sayed's skewed understanding of how power works does not generate encouraging signs for a relatively new filmmaker. Yes, power corrupts, and absolute power corrupts absolutely, and that is exactly what the case is with the Chief Minister's son Apurva. He knows he can get away with doing anything and that there will never be any repercussions. Although this bit of character development tries to take inspiration from reality, it appears far from it. Apurva's presence is looming, sure, but it's extremely difficult to imagine such a hideous character in real life.

Little thought appears to have been put into sketching out the character of Vidya's husband, too. He is made to look and feel like the Devil incarnate, caring more about his wife passing the bottle of ketchup along during dinner than the trauma she has been going through. Moreover, the system - i. e. the police - is portrayed as unimaginably sycophantic, and would fit better in a pulp-fiction magazine than into reality. You could argue that these were deliberately scripted that way, but they barely appear plausible.

A few performers however stand tall amidst all the deficiencies. Tandon is earnest and oozes confidence. She infuses her character with enough verve, and that's saying something considering she has almost nothing to work with. Madhur Mittal is perfect for his role, and carves something out of absolutely nothing. Divya Jagdale plays Ritu, Vidya's only true friend, very convincingly, and although the foundations of their friendship feel shallow, there's enough sisterhood on show. The rest of the cast aren't too memorable.

The visuals are for the most part aesthetically soothing, except when the camera goes all silhouette on Tandon set against the backdrop of Delhi (which doesn't really look like Delhi). There are also shots of traffic rushing up and down streets, most of which look like borrowed CCTV camera footage and not actual shots for the film. The music is all about one song in which Rahat Fateh Ali Khan croons "zindagi" at least a 100 times to get you to understand just how cruel life could be in a metropolis or a 'hadson-ka-sheher'.

Maatr tries being excessively preachy and that is exactly what brings about its nemesis. It ultimately ends up being a movie without any soul. Women empowerment deserves better.
Share. Save. Connect.
Tweet
MAATR SNAPSHOT 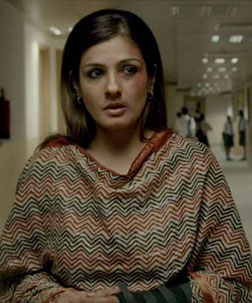 ADVERTISEMENT
This page was tagged for
Maatr hindi movie
Maatr reviews
release date
Raveena Tandon, Divya Jagdale
theatres list
Follow @fullhyderabad
Follow fullhyd.com on
About Hyderabad
The Hyderabad Community
Improve fullhyd.com
More
Our Other Local Guides
Our other sites
© Copyright 1999-2009 LRR Technologies (Hyderabad), Pvt Ltd. All rights reserved. fullhyd, fullhyderabad, Welcome To The Neighbourhood are trademarks of LRR Technologies (Hyderabad) Pvt Ltd. The textual, graphic, audio and audiovisual material in this site is protected by copyright law. You may not copy, distribute, or use this material except as necessary for your personal, non-commercial use. Any trademarks are the properties of their respective owners. More on Hyderabad, India. Jobs in Hyderabad.