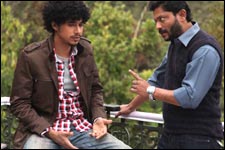 Nupur Barua / fullhyd.com
EDITOR RATING
7.0
Performances
Script
Music/Soundtrack
Visuals
7.0
7.0
6.0
6.0
Suggestions
Can watch again
Yes
Good for kids
No
Good for dates
Yes
Wait to rent it
Yes
2011 has been the year of the experimental film, so far. And, as is common with this category, there is always space for more. 404: Error Not Found fits in perfectly into this zone of 'alternate' cinema, and does not do a bad job of it, either.

Do not be deceived by the name. This movie has nothing to do with the Internet, or even with computers. 404 refers to a room, and an extraordinary one at that. Abhimanyu (Rajvvir Arora) is a fresher at a medical college, tucked away in the middle of somewhere. His batch-mates are subjected to some heavy-duty ragging by the hostel seniors, led by Chris (Imaad Shah).

Abhi himself does not give in easily, and, to ease the humiliation caused to his room-mates by his rebellion, decides to shift out to another room, alone. Despite the Dean's misgivings and the warden's warnings, Abhi asks to be allotted a room that has been shut for 3 years - Room 404.

The seniors do not give up easily, and continue to taunt Abhi for his audacity. The previous occupant of Room 404 was Chris's batch-mate, Gaurav, who committed suicide, and the room has been out of bounds since. The seniors harass Abhi, and torture him with tales of Gaurav's spirit. Soon, Abhi begins to 'see' the dead student.

In the middle of all this drama is a professor (Nishikant Kamat) of Psychiatry, a member of the visiting faculty. His wife (Tisca Chopra), also a psychiatrist, is a lecturer in the college. Their passion lies in understanding the bi-polar disorder. The professor takes Abhi under his wings, and both husband and wife are concerned with his sudden obsession with Gaurav.

Rajvvir Arora as the brilliant rational student who turns superstitious plays his part laudably. Satish Kaushik as the warden is wasted, but makes an impact nevertheless. Mukesh Bhatt as the hostel peon is noteworthy, although his character is not really sketched out. The ragging seniors play their parts well - from sinister menaces to boys who want to have a little fun.

Tisca Chopra is a natural, and she tries her best to make her rather wishy-washy role interesting. Nishikant Kamat, taking time out from his direction and screenwriting to act, is surprisingly believable, but the histrionics can get to you after a while. Nevertheless, his attempt at playing a well-read, qualified man of medicine is commendable.

The surprise (well, not really, given his genes) package is Imaad Shah. Not only does he portray a disinterested, egocentric, prodigious medical student with ease, he even plays the harmonica and the guitar, and scores the background music for the movie.

The script is original, and gripping, making 404 a taut psychological thriller. It stretches a bit towards the end, and the climax is a bummer, but the plot leading to the conclusion of the eternal science-versus-faith debate will keep you guessing. Although predictably spooky in parts (like the spirit of Gaurav appearing in mirrors), 404 is not a horror movie.

If you can ignore the fact that such a huge medical college, DIMS, has a just a handful of students, that the Dean does not have too much authority there, that freshers are allowed to come and go from the premises as they please, and that mentally-ill patients are allowed to hobnob with students, then this movie is a must-watch this weekend. What is refreshing is that Prawaal Raman has not tried to be too intelligent, and has yet managed to turn his screenplay into a winner.
Share. Save. Connect.
Tweet
404 SNAPSHOT

ADVERTISEMENT
This page was tagged for
404 english movie
404 reviews
release date
Rajvvir Arora, Imaad Shah
theatres list
Follow @fullhyderabad
Follow fullhyd.com on
About Hyderabad
The Hyderabad Community
Improve fullhyd.com
More
Our Other Local Guides
Our other sites
© Copyright 1999-2009 LRR Technologies (Hyderabad), Pvt Ltd. All rights reserved. fullhyd, fullhyderabad, Welcome To The Neighbourhood are trademarks of LRR Technologies (Hyderabad) Pvt Ltd. The textual, graphic, audio and audiovisual material in this site is protected by copyright law. You may not copy, distribute, or use this material except as necessary for your personal, non-commercial use. Any trademarks are the properties of their respective owners. More on Hyderabad, India. Jobs in Hyderabad.