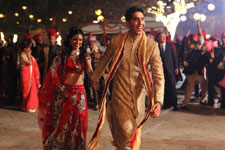 Zehra Abbas / fullhyd.com
EDITOR RATING
6.5
Performances
Script
Music/Soundtrack
Visuals
7.0
6.0
6.0
7.0
Suggestions
Can watch again
No
Good for kids
No
Good for dates
No
Wait for OTT
Yes
Do you remember the last time your grandma began telling you an anecdote and then digressed into five different stories without even realizing it? The Second Best Exotic Marigold Hotel achieves narrative verisimilitude that is unheard of; it's slow to come to the point, prone to repetition but charming nevertheless, just like its septuagenarian characters.

The film is a sequel to the 2012 surprise hit The Best Exotic Marigold Hotel, and all the familiar faces are back. The movie opens with Sonny (Dev Patel) and Mrs. Donnelly (Maggie Smith) travelling to the US to meet potential investors in order to open a second hotel. Back home in Jaipur, Sonny's fiancée Sunaina prepares happily for their impending wedding. Fissures begin appearing between the lovebirds when Sonny's ambition metamorphoses into an obsessive desire for the second hotel.

His erratic behaviour is further exacerbated by a potential rival Kushal (Shazad Latif), and then the arrival of a new, American guest, Guy Chambers (Richard Gere). Sonny "knows because of his nose" that Chambers is an undercover inspector sent by the investors to observe the hotel and its functioning. Chambers is instantly attracted to Sonny's mother, Mrs. Kapoor, and pursues her with typically American straightforwardness.

Evelyn Greenslade (Judi Dench) and Douglas Ainslie (Bill Nighy) struggle to articulate their growing feelings for each other while Madge Hardcastle (Celia Imrie) is caught between two handsome and rather persistent Indian suitors. Norman Cousins (Ronald Pickup) and Carol Parr (Diana Hardcastle) seem blissfully mated till a turn of events brings some startling truths to light. In a welcome departure from all these couples, Mrs. Donnelly stays resolutely single, confessing to being unable to "stand a bugger for more than a week".

Thought the meandering plot doesn't give us enough of all the actors in this fantastic ensemble, they are a treat to watch whenever they get screen time. Maggie Smith channels a gentler, less acerbic version of her Countess from Downton Abbey, and is phenomenal with her very droll, very British delivery of sarcastic one-liners. She maintains sangfroid throughout the film, and infuses a much-needed centredness and depth at the end as all the scrambling couples resolve their issues.

Dev Patel is in his element as Sonny and goes to town with his over the top accent, manic energy and poetic hyperbole. It's an endearing performance, and the Bollywood number at the end with Tina Desai is heavily reminiscent of Jai Ho from Slumdog Millionaire. Desai, on the other hand, is reduced to playing a character with her own unique obsession - dancing at her wedding. That's pretty much all she talks about, and even the much-needed advice to her hyper-ventilating fiancé is delivered through the prism of this obsession - calm down, focus, pull yourself together, otherwise you won't be able to follow the choreography.

Gere is a welcome addition to the cast but his romance with Dubey is hurriedly sketched and unconvincing. Both actors have a great deal of charm and personality at their disposal, but the numerous plot points don't give the makers the time to utilize their (the actors') acting chops. However, female members of the audience will certainly doff their hats to Gere's enduring visual appeal.

The story that does receive more screen time and a far more sensitive portrayal is Evelyn's and Douglas's burgeoning romance. Dench and Nighy realistically and touchingly enact the characters' lack of confidence and their hesitation to make a serious commitment at such a late stage in life. The "meet the parents" ritual is also turned on its head as Dench waits nervously to meet Nighy's daughter.

To add hilarity to the mix, Pickup does a charming job as Norman, the flirtatious yet devoted old codger who discovers that his partner Carol is unapologetically flouting the rules of monogamy. Celia Imrie as the free-spirited Madge brings her own brand of tongue-in-cheek humour and irreverence to the proceedings, and the audience guesses easily that her story will have an unconventional ending.

All of this madness takes place in beautiful Jaipur, and thankfully the filmmakers have chosen to show the city as it really is and not from the distorting peephole of Western, preconceived notions. That being said, the film does lapse into stereotypes and clichés here and there. So, you have the ubiquitous reference to a cow on an airplane runway. Ho-hum. What's rather peculiar is the film's depiction of Indians in general. They are shown as unfailingly polite, helpful and wise. Not to say that isn't a possibility, but we're definitely not as vanilla, Mr. Madden - we're more kesar-pista.

The production design is generally satisfactory, and it's apparent that the team wanted to create a look and feel that doesn't draw attention to itself but stays comfortably in the background and allows you to focus on the story and its characters. The hotel is quaint, the wedding lavish, an ambassador and an auto keep vying for your attention, and the clothes look like they've been picked up en masse from Fab India.

The original soundtrack by Thomas Newman is overshadowed by the robust sounds of Bollywood numbers like "Yeh Ishq Hai" and "Jhoom Barabar Jhoom". However, these numbers and their sudden blaring seem like a slightly jarring choice considering the overall pace and premise of the film.

The premise of the movie is surely one of its winning features. The filmmakers should be lauded for having the courage to make a simple film, driven by understated acting and clever dialogue, that explores the possibilities still available to old-timers in the twilight years of their lives. It's even more laudatory that the movie doesn't shy away from discussing love, infidelity, fear and that Damocles' sword - death. The "seize the day" message to those whose days are numbered is given an uplifting and charming treatment.

The crucial mistake that the film makes is cramming too much into two hours. The result is that a certain thinness prevails, and it all never fills out into a full-bodied, emotionally gratifying cinematic experience. Even wonderfully written dialogue begins to feel trite and predictable since it's one of the first elements to be sacrificed to the film's biggest weakness - it's plot.

So when Douglas says, "There's just so much bloody potential," you are inclined to share in his frustration as you watch a film with a wonderful cast and premise reduced to, well, second best.
Share. Save. Connect.
Tweet
THE SECOND BEST EXOTIC... SNAPSHOT
THE SECOND BEST EXOTIC MARIGOLD HOTEL SNAPSHOT 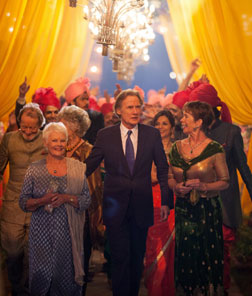 ADVERTISEMENT
This page was tagged for
The Second Best Exotic Marigold Hotel english movie
The Second Best Exotic Marigold Hotel reviews
release date
Judi Dench, Maggie Smith
theatres list
Follow @fullhyderabad
Follow fullhyd.com on
About Hyderabad
The Hyderabad Community
Improve fullhyd.com
More
Our Other Local Guides
Our other sites
© Copyright 1999-2009 LRR Technologies (Hyderabad), Pvt Ltd. All rights reserved. fullhyd, fullhyderabad, Welcome To The Neighbourhood are trademarks of LRR Technologies (Hyderabad) Pvt Ltd. The textual, graphic, audio and audiovisual material in this site is protected by copyright law. You may not copy, distribute, or use this material except as necessary for your personal, non-commercial use. Any trademarks are the properties of their respective owners. More on Hyderabad, India. Jobs in Hyderabad.