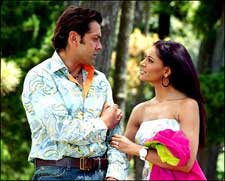 Ghazala Rizvi / fullhyd.com
EDITOR RATING
5.0
Performances
Script
Music/Soundtrack
Visuals
NA
NA
NA
NA
Suggestions
Can watch again
NA
Good for kids
NA
Good for dates
NA
Wait to rent it
NA
It has been proved time and again that Indians, especially the story-writers of the species, can do just about anything - all they need is a little help from wacky directors, and some believing distributors, to unleash their bromidic art over the audience. In Barsaat, they are assisted even by the cast.

Barsaat is the love story of two women. Exciting as it would have been, the two concerned women are not in love with each other, but with Bobby (Arav), who, untouched by Cupid, likes chasing his dreams solo. Being the son of a complete Indian family helps his being a brat.

Arav is in the US, serving time as a car mechanic while nursing a passion for bigger things in life - not that that he is not qualified, but because in the scheme of bigger things, there is a mandatory time that a guy has to put in. And also because Bips requires extra time to practice using her scarf as a skirt, before she can make an entry.

As we know very less about the lifestyles of mechanics in America, we'll not bother about Arav's plush pad, or his designer jackets. America, that pantheon of human freedom and fried burgers, is nevertheless not free of a few snags. Arav finds it the easier way when he bumps into Anna (Bipasha Basu), at a BMW showroom. By design developed to be sturdy, requiring minimum maintenance but a considerable amount of care, Anna is the sweet granddaughter of the BMW's chairman, Virvani (Shakti Kapoor).

The chance meeting is immediately converted into a marriage bait, by Ana egging her grandpa to induct Arav both into his company and into her life. With the wedding bells tolling in the background, Arav remembers a minor detail - he is already married to his childhood sweetheart Kajal (Priyanka Chopra).

Arav and Kajal had shared their wonder years together, and before he set sail for his studies, Arav was fully committed to marrying Kajal. After reading Freud at college, he decides Kajal is just his friend, but nevertheless marries her, because of his mom. Now landing with Anna on his hands, he quickly arranges for a divorce and a second marriage.

But after completing four pheras with Anna, he reverts to Kajal.

The rigmarole could have continued sine die with Arav playing a yo-yo between the duo, but for Bobby Deol's timely revolting. After all, he still has a couple of films that he hopes to do in future. Bobby Deol won the best debut for Barsaat in 1995, because he had deep eyes, Big Pa, and Twinkle. He still retains 2/3rds of the ingredients, but instead, he decides to act.

Barsaat is however not going to slip altogether. It has good looks, vibrant colors and catchy numbers. Nadeem Shravan's music is peppy, and shows off Alka Yagnik's voice to its fullest. Bips is as sexy as last seen, while Priyanka tries very hard. Riding high on the color and the music content of the movie, both the girls will come out of this one with minimum damage. Unfortunately, both didn't decide to kick Arav, or at least the director, sooner.
Share. Save. Connect.
Tweet
BARSAAT SNAPSHOT

ADVERTISEMENT
This page was tagged for
Barsaat hindi movie
Barsaat reviews
release date
Bobby Deol, Bipasha Basu
theatres list
Follow @fullhyderabad
Follow fullhyd.com on
About Hyderabad
The Hyderabad Community
Improve fullhyd.com
More
Our Other Local Guides
Our other sites
© Copyright 1999-2009 LRR Technologies (Hyderabad), Pvt Ltd. All rights reserved. fullhyd, fullhyderabad, Welcome To The Neighbourhood are trademarks of LRR Technologies (Hyderabad) Pvt Ltd. The textual, graphic, audio and audiovisual material in this site is protected by copyright law. You may not copy, distribute, or use this material except as necessary for your personal, non-commercial use. Any trademarks are the properties of their respective owners. More on Hyderabad, India. Jobs in Hyderabad.