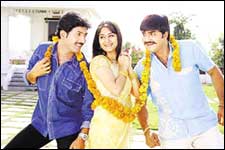 EDITOR RATING
3.0
Performances
Script
Music/Soundtrack
Visuals
NA
NA
NA
NA
Suggestions
Can watch again
NA
Good for kids
NA
Good for dates
NA
Wait for OTT
NA
Like anybody sitting in a bar will tell you, marriage can be a big mistake. People who have two wives, however, are seldom found in a bar. That is because you need money to drink. Gathering from this reasoning that it’s always better to have 2 wives if you want to avoid drinking, Venkateshwarulu (Venu) makes it his life’s mission to have two wives.

If you think that’s spurious reasoning, well, he has an even better reason – his grandmother tells him that a man who marries twice has a greater probability of living. Being one of those people for whom living longer is a great end to pursue (heh, heh – get our clever pun?), he promises her that he will marry two women at the same time.

Hunting for wives is not easy for him then, since no girl wants to be one of two wives – like we all know, it’s hard to understand girls. Finally Indu (Gowri Munjal) falls in love with him, but when she learns of his fixation for two wives, she is heart-broken. But then she decides that his repertiore of expressions doesn’t deserve more than half her time anyway, and decides to go ahead.

For his other wife, Venkateshwarulu finds a street dancer who is willing to marry anyone, anytime, and at any center, for money. The pandal, however, sees something weird – just as Venkateshwarulu has finished tying the knot with Indu and is about to marry the other one, in steps Ramakrishna Raju (Srikanth), saying he is Indu’s husband.

It transpires that Raju had married Indu, but in an accident she lost her memory, which she regains when she slips and falls in the pandal now. This is the main learning from this movie – that if you want to regain your memory, you should slip and fall. Since you do not know if you have forgotten anything anyway, it’s a good idea to generally slip and fall every once in a while. Who knows what you’ll remember?

Like any normal girl in a similar situation, Indu now decides that she will live with both her husbands together for a month and decide who to stay with after that. Venkateshwarulu is too much in love with her by now, so he agrees to compete for her affections. The second half of the film is all about the latest thought in how to share your wife with your step-husband effectively.

The primary reason you’d want to watch Srikrishna 2006 is …well, very little. And there is no secondary reason. There are side-tracks involving Brahmanandam, Ali and Dharmavarapu Subrahmanyam that are funny in parts, but this can’t be called a family movie either because of both the theme and too much flesh in some songs.

Venu has a constant glint in his eyes that makes all his expressions look like extensions of a primary expression. Srikanth is, of course, good, and Gowri Munjal is expressive if not gorgeous. Ramya Krishna is in a surprisingly insignificant role. The entire comic cast of Tollywood features, but they don’t have enough innovation in conceptualization to help the entertainment value of this one.

Unless you have similar problems and need ideas, wait for this to hit the TV channels.
Share. Save. Connect.
Tweet
SRI KRISHNA 2006 SNAPSHOT

ADVERTISEMENT
This page was tagged for
Sri Krishna 2006 telugu movie
Sri Krishna 2006 reviews
release date
Venu, Srikanth
theatres list
Follow @fullhyderabad
Follow fullhyd.com on
About Hyderabad
The Hyderabad Community
Improve fullhyd.com
More
Our Other Local Guides
Our other sites
© Copyright 1999-2009 LRR Technologies (Hyderabad), Pvt Ltd. All rights reserved. fullhyd, fullhyderabad, Welcome To The Neighbourhood are trademarks of LRR Technologies (Hyderabad) Pvt Ltd. The textual, graphic, audio and audiovisual material in this site is protected by copyright law. You may not copy, distribute, or use this material except as necessary for your personal, non-commercial use. Any trademarks are the properties of their respective owners. More on Hyderabad, India. Jobs in Hyderabad.