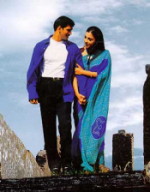 Feroz Hassan / fullhyd.com
EDITOR RATING
3.0
Performances
Script
Music/Soundtrack
Visuals
NA
NA
NA
NA
Suggestions
Can watch again
NA
Good for kids
NA
Good for dates
NA
Wait for OTT
NA
It doesn't help to make a movie with a wafer thin plot and a huge starcast. The job becomes all the more impossible if you are making a suspense flick. If one does happen to make the effort, the result is akin to Tarkieb - a film that bores you to death. Every aspect of the film suggests callousness on the makers' part.

As for the story, the director comes straight to the point as we are shown a dismembered body, belonging to a girl, floating in a lake. The identity of the girl is not established and the case is assigned to the CBI. Officer Jasraj Patil (Nana Patekar) is in charge of the investigation. The girl is identified as Pooja (Tabu), a nurse in a military hospital.

That done, the film starts falling apart. We are introduced to a host of characters who were in some way related to Pooja. This back 'n' forth narration is quite tiring to say the least. We come to know of Pooja's sob story. She has three sisters and comes from a poor family. She has a relationship going with Captain Ajit Verma (Milind Soman), a doctor in the same hospital.

Pooja's father catches her with the photograph of Ajit and presumes that she has found a match for one of the sisters. She doesn't want to let down her family and tries to convince Ajit to marry her sis. Of course he doesn't agree and we have an estranged couple. Through the tedious flashback, we come to know of the probable motives that the other characters might have for killing Pooja.

When you do get to know the culprit, you wish you hadn't bothered sitting through the movie. The perpetrator, as well as the reason and the mode of killing are shockingly banal.

The screenplay is atrocious, as it fails to keep us on tenterhooks. A suspense movie has to have a systematic dissection of a crime and this one just wastes time in sketching out the characters. There are no intriguing clues that may be worth mulling over.

To add to our woes, the actors seem less than inspired. In fact, Ashutosh Rana takes the liberty of thinking over his dialogues - at least that is what I could infer from the inordinate pauses in his speech.

Nana is pretty sombre and wears a look that suggests that he might want to take a nap. He gets to crack his usual share of caustic dialogues, at the expense of his sidekick, Gangaram (Tiku Talsaniya). They incite a chuckle or two but that doesn't help in enlivening the proceedings.

Tabu is her usual restrained self. Shilpa Shetty is the real mystery here. She has a two-bit role that effectively relegates her to being a non-entity in the movie. Any extra would fit the role. Why her?

Milind Soman makes an unremarkable debut, but, by the looks of it, he might be the perfect guy to play those brooding protagonists. A better director may be able to push him onto greater things.

All said and done, Tarkieb is a guessing game that no one would want to play.
Share. Save. Connect.
Tweet
TARKIEB SNAPSHOT

ADVERTISEMENT
This page was tagged for
tarkieb hindi full movie
Tarkieb full movi
Tarkieb hindi movie
Tarkieb reviews
release date
Follow @fullhyderabad
Follow fullhyd.com on
About Hyderabad
The Hyderabad Community
Improve fullhyd.com
More
Our Other Local Guides
Our other sites
© Copyright 1999-2009 LRR Technologies (Hyderabad), Pvt Ltd. All rights reserved. fullhyd, fullhyderabad, Welcome To The Neighbourhood are trademarks of LRR Technologies (Hyderabad) Pvt Ltd. The textual, graphic, audio and audiovisual material in this site is protected by copyright law. You may not copy, distribute, or use this material except as necessary for your personal, non-commercial use. Any trademarks are the properties of their respective owners. More on Hyderabad, India. Jobs in Hyderabad.