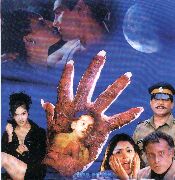 EDITOR RATING
3.0
Performances
Script
Music/Soundtrack
Visuals
NA
NA
NA
NA
Suggestions
Can watch again
NA
Good for kids
NA
Good for dates
NA
Wait for OTT
NA
After quite some time we have a Hindi horror movie on our hands and that never is an exciting prospect. To begin with, the star cast is a mystery, which is replete with unknown faces. The titles introduce only Amar Upadhyaya (hero) and Shruti Sood (heroine). The rest of the cast is equally unfamiliar, and to top it all the script does not reveal many of the characters' names as they are always addressed as "suniye", "Inspector saab", "Haram zaade" etc. The only known faces are Mohan Joshi and Rajesh (Music Asia's Anchor).

The film opens on a full moon night with a husband killing his wife, whom he married for monetary considerations. Subsequently, he elopes with his girlfriend. The wife's ghost then kills both of them.

Three friends, Vikky (Amar Upadhyaya), Ballu and Sanju, jointly own a garage. Vikky's sister Anu and Sanju love each other without the knowledge of Vikky.

Vikky meets Priya (Shruti Sood) at a restaurant and falls in love with her. But Shruti is engaged to Rakesh, who gets mysteriously killed on a highway on a full moon day. The body is marred with claw marks and hence the police rule out human involvement.

Priya on the other hand is saved by Vikky, first from a suicide attempt and then from some goons. The next step is obviously falling in love. This followed by a few more murders on the ominous highway under the full moon.

Anu and Sanju are married but they too get killed. After a few more twists we reach the climax, where the killer accepts the crime. Needless to say, it is all very confusing.

The director himself is not clear about the genre of his movie. Though it is supposed to be a horror flick, the director meanders into romance. But for a few murders, there is nothing horrifying in the movie. The romantic equations are baffling to say the least.

The film lacks the required punch of a horror movie and suffers from a loose script, which seems to get nowhere. The music is average and thankfully there are not many songs. On the whole Dahshat could have been made better with some interesting star cast, good music and some publicity.
Share. Save. Connect.
Tweet
DAHSHAT SNAPSHOT

ADVERTISEMENT
This page was tagged for
Dahshat hindi movie
Dahshat reviews
release date
Amar Upadhyaya, Shruti Sood
theatres list
Follow @fullhyderabad
Follow fullhyd.com on
About Hyderabad
The Hyderabad Community
Improve fullhyd.com
More
Our Other Local Guides
Our other sites
© Copyright 1999-2009 LRR Technologies (Hyderabad), Pvt Ltd. All rights reserved. fullhyd, fullhyderabad, Welcome To The Neighbourhood are trademarks of LRR Technologies (Hyderabad) Pvt Ltd. The textual, graphic, audio and audiovisual material in this site is protected by copyright law. You may not copy, distribute, or use this material except as necessary for your personal, non-commercial use. Any trademarks are the properties of their respective owners. More on Hyderabad, India. Jobs in Hyderabad.