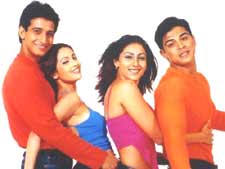 EDITOR RATING
6.0
Performances
Script
Music/Soundtrack
Visuals
NA
NA
NA
NA
Suggestions
Can watch again
NA
Good for kids
NA
Good for dates
NA
Wait to rent it
NA
Style is targeted at two kinds of youth: the first is those college-goers who don only CK and Dior, who reach college on real hot wheels, who are greeted there by bevies of buxom girls clad in tanktops that are 3 sizes too short and tucked into microskirts that are 6 sizes too short, who dance to packed campus crowds, who ward off hordes of wild female fans ...and who then wake up with a start as they fall off the bed. The second kind, however, is of those youth who don't have to dream of all this in their sleep - they dream of it even when they are awake.

That's Style for you - a whole lot of primarily fantasyland, but of a kind that you never tire fantasizing about. And that's what makes the film rise above the wilted geranium that its script could have made it. What Chandra lacks in star power, he makes up for in the glitziness and the vibrancy of his package, and what you see is a slick and colorful production that can cater to your instincts at several levels.

Bantu (Sharman Joshi) and Chantu (Sahil Khan) are students of a super-swanky Mumbai college, but lack in dads who have the kind of money needed to satisfy the consequent demands on their lifestyle. However, they are the sort that can sell a bucket of water to the Arabian sea on the premise that the sea needs it for its daily bath, and consistently demonstrate how having rich friends with the IQ of the Arabian sea is equivalent to being rich yourself.

Rani (Riya Sen) and Sheena (Shilpi Mudgal) are co-students who are constantly pitting their wits against those of our duo to save the latter's targeted scapegoats from disaster, but don't realize that it's themselves that's the target each time, until the chop is delivered. If they get bored of this happening continuously, they don't show it, for they are too busy showing other things.

But worse is yet to come - the guys eventually realize that they need more sustainable sources of income in life, namely rich wives. Their research leads them to realize that while Rani's and Sheena's assets certainly appear disproportionate to their known sources of income (and you'd hardly disagree with that, given the, ahem, exposure you get to them), that is actually the case with their dads. And so they decide that they are going to marry these girls.

The film has a good amount of comic stuff, especially in the first half, and if you aren't a seasoned veteran of movies and have questionable morals, you might even find it funny. The color and the swish on screen have you glued, and all those girls cavorting about in tubes, minis, micros and kerchiefs do your general sense of well-being no harm. The second half has this fooling around on film trying to evolve into a movie in earnest, and understandably sucks.

Sharman Joshi is quite good, and really has you empathizing with him (which isn't hard considering that you very much want to be in his position). In some scenes he's indeed brilliant. Sahil Khan is muscular, knows it, and makes sure you don't miss the point. He even acts ...in the stunt scenes.

Riya Sen is cute, and thereby does the needful. Her dialogue delivery brings back her mom's acting days - she talks exactly the way she must have been when her mom was still heroine, and when she herself must have been like 4. Shilpi looks like she can act, but that's because of an unfair advantage - she gets to be compared with Riya.

The music is good, and the cinematography excellent. So is Tara Deshpande's effort at hiding her paunch. And guess what? She's a gym instructor. She's getting wasted, and we're not talking of only on booze.

In sum, worth a watch, but don't go with your girlfriend - Sahil will give her all the wrong ideas about what you should be doing, and there won't be a Tara Deshpande at every gym, right?
Share. Save. Connect.
Tweet
STYLE SNAPSHOT

ADVERTISEMENT
This page was tagged for
style Hindi movie
Hindi movie Style
style hindi movie
style hindi movie heroine
hindi style movie
Follow @fullhyderabad
Follow fullhyd.com on
About Hyderabad
The Hyderabad Community
Improve fullhyd.com
More
Our Other Local Guides
Our other sites
© Copyright 1999-2009 LRR Technologies (Hyderabad), Pvt Ltd. All rights reserved. fullhyd, fullhyderabad, Welcome To The Neighbourhood are trademarks of LRR Technologies (Hyderabad) Pvt Ltd. The textual, graphic, audio and audiovisual material in this site is protected by copyright law. You may not copy, distribute, or use this material except as necessary for your personal, non-commercial use. Any trademarks are the properties of their respective owners. More on Hyderabad, India. Jobs in Hyderabad.