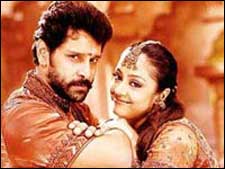 Priyanka Pulla / fullhyd.com
EDITOR RATING
5.0
Performances
Script
Music/Soundtrack
Visuals
NA
NA
NA
NA
Suggestions
Can watch again
NA
Good for kids
NA
Good for dates
NA
Wait for OTT
NA
It's a pity that the makers of blood-soaked video games like Quake 2 and Blood don't draw on Tamil political movies. Like the sparks that shoot off in the air from a bonfire, Akhandudu throws up a melee of scythes, kill-easy iron rods, bombs and pistols, in animation.

The wielders are Shankar (Vikram) and his companions, but it's the weapons that do the acting, talking and speeding through the movie. The blood gushes in delicious, beholden release, and speckles the movie like succulent strawberries in a field. The movie soon programs you into anticipating and sighing satisfiedly every time a new person is killed. Back-and-forth, back-and-forth it goes on till, finally, Shankar tips the balance and the movie exhausts its fuel.

That's Akhandudu for those who don't watch a movie so closely. And for those who do, here is the story. Shankar is a factory worker who has given up working as a goldsmith, unable to take his father's constant berating. Jyothika plays the girl next door who loves him with bhakti bhaav, but whose love he somehow does not return. Quite unintentionally, Shankar gets involved in a fight with the brother of a local MLA Jagapathy (Kollam Thulasi), and as tempers flare, he batters him to death. Jagapathy swears revenge on him and thus begins a fast-forward version of the Christian Crusades. He wins, they win, he wins, they win and so on and on, till he wins once and for all.

In the process Shankar unites the whole town of Rajamundry, which rises up in sheer outrage against the MLA's corruption. It's a clash of the masses against organized goondas, and for a change, the masses are always one-up. The MLA sends a party of villains to beat up Shankar, and they come up against a 1,000 supporters of Shankar. The MLA sets out to kill his family but the hero manages to save them all. Finally, when the hoodlums do some serious damage by killing Shankar's relatives, he goes ahead and kills the MLA. And the city, as well as the police, rise up to cover him, find him an alibi, and make him walk free again.

It's a potent and explosive movie which you will leave feeling as if you have been slapped on your face. The soundtrack is chants of hari om that do a crescendo as good vanquishes evil. The justice takes place expeditiously; it's blood and gore over lawsuits and prison. Jyothika plays the strong bhaarya who transforms from a girl obsessing over her crush, to the woman who flexes her muscles and stands behind her man.

The dubbing from Tamil and the Tamil language sign-boards are of course not the only giveaway of the movie's origins. This translation of the Tamil movie Arul, has the unmistakable in-your-face stamp of Kollywood.

Watch only if you have fought some war of your own and suffer from Post Traumatic Stress Disorder. Else, you do not need this brand of pummelling and clobbering to find your much-needed release.
Share. Save. Connect.
Tweet
AKHANDUDU SNAPSHOT

ADVERTISEMENT
This page was tagged for
vikram akhandudu mp3 songs
akhandudu vikram 2004 naa mp3
Aakandudu telugu movie download
Aakandudu telugu movie
akhandudu
Follow @fullhyderabad
Follow fullhyd.com on
About Hyderabad
The Hyderabad Community
Improve fullhyd.com
More
Our Other Local Guides
Our other sites
© Copyright 1999-2009 LRR Technologies (Hyderabad), Pvt Ltd. All rights reserved. fullhyd, fullhyderabad, Welcome To The Neighbourhood are trademarks of LRR Technologies (Hyderabad) Pvt Ltd. The textual, graphic, audio and audiovisual material in this site is protected by copyright law. You may not copy, distribute, or use this material except as necessary for your personal, non-commercial use. Any trademarks are the properties of their respective owners. More on Hyderabad, India. Jobs in Hyderabad.