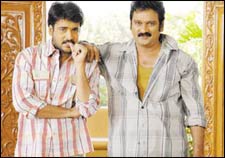 EDITOR RATING
6.0
Performances
Script
Music/Soundtrack
Visuals
NA
NA
NA
NA
Suggestions
Can watch again
NA
Good for kids
NA
Good for dates
NA
Wait for OTT
NA
“Chaala undiraa neeku,” mutters Krishna Bhagawan sardonically of Sivaji in the rather cryptically titled Tata Birla Madhyalo Laila. That’s kinda true of the film too - it’s been in the news primarily for being the swansong of Laya, but it does have more than you expect. It’s a bug-free rib-tickling comedy for those moments when you want to feel artificially happy, since the world isn’t conspiring towards that.

The comedy in TBML is more situational and contextual rather than plot-driven – it is more like a book of jokes by a cartoonist rather than a Wodehouse novel. The dialogues range from witty to hilarious, the performances from deadpan to hyper-active, and your expressions from self-conscious happiness to thigh-slapping rollicking. And at the end of it all, you won’t ask yourself any stupid questions.

Tata (Sivaji) and Birla (Krishna Bhagawan) are small-time thieves who start with the assumption that everything in the world belongs to them, and therefore go ahead trying to set things right. The first half hour of the film entertains with their escapades in parting people from their money (your interpretation of “their” there differs from that of our duo).

One day they discover a plot where they stand to earn Rs. 30 lakhs by impersonating a vicious goon, who they then maim and imprison in their room. They are asked to join as domestic help in the home of Gajapati (Tanikella Bharani) and become close to the family, by the man who originally hired the goon and now thinks these two are from the same gang.

Gajapati is an extremely rich man and loving father to Mahalakshmi (Laya), and soon the two become very good companions to the girl, who even falls in love with Tata when he once risks his life to save hers from some kidnappers. The duo get quite comfortable in the palatial home and are totally in a comfort zone when the client re-enters the picture with the actual mission to be executed – killing Mahalakhsmi.

The film fortunately does not disintegrate into attempted drama or thrills in the second half – it stays a comedy for the most part. So you have another crook Mastan (Ali) entering in the garb of a woman Laila, who saves Mahalakshmi’s life and is asked to stay with them, and Dorababu (Raghubabu), another swindler, in the garb of a swamiji who enters the home as the guru of Gajapati’s wife. Add some inhouse comedians and Brahmanandam as an inspector, and the list is complete. And then the expected comedy follows, such as Birla falling in love with Laila.

The performers are all seasoned and the jokes are all original, so you are entertained almost all through, and actually laugh out loud several times. The music is ordinary – and Laya does not show even her navel, of course, so they bring in an item song girl, which is frankly an unnecessary addition to a film that is otherwise complete family fare.

Laya must be commended on lasting out a reasonable course on her own terms in an industry that thrives on the skin of its leading women. It would be a great tribute to an accomplished person (she was a chess champion, academic topper, award-winning dancer etc. too) if this film did well.

Tata Birla Madhyalo Laila can be an easy respite in your life. Coming as it does at a time when there have been no successful releases in over 2 months, this just might be a surprise performer.
Share. Save. Connect.
Tweet
TATA BIRLA MADHYALO LAILA SNAPSHOT

ADVERTISEMENT
This page was tagged for
Tatabirlamadhlolailamove
tata birla madhyalo laila songs downloading
tata birla madhyalo laila telugu review
Tata Birla Madhyalo Laila
Tata Birla madhyalo Laila Telugu song downloading
Follow @fullhyderabad
Follow fullhyd.com on
About Hyderabad
The Hyderabad Community
Improve fullhyd.com
More
Our Other Local Guides
Our other sites
© Copyright 1999-2009 LRR Technologies (Hyderabad), Pvt Ltd. All rights reserved. fullhyd, fullhyderabad, Welcome To The Neighbourhood are trademarks of LRR Technologies (Hyderabad) Pvt Ltd. The textual, graphic, audio and audiovisual material in this site is protected by copyright law. You may not copy, distribute, or use this material except as necessary for your personal, non-commercial use. Any trademarks are the properties of their respective owners. More on Hyderabad, India. Jobs in Hyderabad.