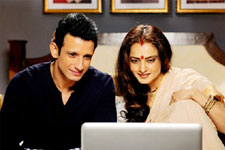 Nupur Barua / fullhyd.com
EDITOR RATING
3.0
Performances
Script
Music/Soundtrack
Visuals
5.0
3.0
5.0
6.0
Suggestions
Can watch again
No
Good for kids
No
Good for dates
No
Wait to rent it
No
Indra Kumar believes that this role was tailor-made for Rekha, and that if anybody can endorse women empowerment, it is none other than the sultry, enigmatic diva. Rekha, of course, is the only reason anybody would even consider watching this movie, despite the not-so-appealing trailers that have been doing the rounds on the social media. Does she successfully deliver the message (on women, their rights, etc)? Let's get to that.

So R K Bhatia (Randhir Kapoor) is a male chauvinist husband who would rather leer at his modern-woman colleague (Varsha Usgaonkar) than spend time with his traditional Indian wife Bharti (Rekha). He is not the only one in the family who thinks she is a doormat, though.

Bharti's son Suketu (Rajesh Kumar) is of the belief that his mother is nothing more than a glorified house help. His wife Aastha (Shreya Narayan) supports her husband's belief. His sister, Gargi (Anchal Dwivedi), is no better. In this unappreciative household, Bharti does all that she can, without complaining, to make sure that the lives of her family members are uncomplicated, that they have food to eat when they get home, and so on.

Of course she is depressed. She yearns for appreciation and some love, and these elude her till her NRI grandson Mann (Sharman Joshi) lands up. He takes stock of the situation and decides that what his grandmother needs is a boost of confidence, and that can only happen with a makeover. With the help of a neighbour (Shweta Kumar), and Bharti's classmate from Patna Sammy (Anupam Kher), Mann puts his plan into execution.

Suddenly, Bharti goes from domestic help to sex bomb, much to the surprise, and shock, of the family. The aim is to tame the family, and it is an uphill task that Bharti now has to accomplish.

Based on the Gujarati play Baa Ae Maari Boundary by Imtiaz Patel, Super Nani is a reversal of the taming of the shrew, in a way. Here is a woman who is treated like dirt for no obvious reason (the first flaw of the story), and she has no option but to comply (the second flaw). Everybody loves a story of an underdog rising to become a superhero, and since this is the premise, one would expect this to be a feel-good movie, right?

Wrong. It IS a feel-good movie, but the situations and the characters are so loud, and exaggerated (because they have to be - how else will you convince the audience of their deviousness?), that you end up with a headache. Subtlety is an alien concept to the makers of this movie, and therefore the emotions and reactions of all the characters are outlandish and bizarre, to say the least.

Not that the content itself is novel. We have seen similar films of downtrodden women who suffer in silence till the Durga in them comes out one day and all hell breaks loose. In fact, one of Rekha's best known movies, Khoon Bhari Maang, is based on a similar graph. What makes it worse is that the treatment of Super Nani seems to be stuck in the 1980s and 1990s. Screaming about live-in relationships being akin to the worst sin possible is definitely not relevant to the 21st century, especially when this reaction comes from the modern NRI man.

Indra Kumar, the director, seems to tell us that a woman should be respected, yes, but that only a conventional Indian woman (religious, obedient, sacrificing, doormat, fully clad etc.) deserves this respect. The screenplay rejects anything that is modern (skimpily clad women who want to live in with divorced men, for example), and praises tradition (blind devotion to a philandering husband, for one). It is a conflicted movie in many ways, not least because it has a progressive message from a regressive protagonist.

Every single actor overacts here. Sharman Joshi is the biggest disappointment, especially with his affected accent. His love interest, played by Shweta Kumar, is irritating, but thankfully does not have much screen time. Rajesh Kumar, Shreya Narayan and Anchal Dwivedi are caricatures, and Anupam Kher is plain silly. Randhir Kapoor seems startled all the time, even when he is playing the dictator.

The only reason you would want to watch this movie is Rekha. Period. She has not lost her charm. Despite the terrible dialogues and the equally bad character graph, she holds the movie. She is sincere, and at ease, no matter how bad the role.

The production design, the costumes, the music and the editing are all reminiscent of the 1990s. Rekha in her sometimes gaudy costumes still manages to look good, though. In fact, her sarees are quite pleasing to the eye. The camera work is flat, and this entire film looks like a saas-bahu serial, visually.

Super Nani is a movie that has to be avoided, unfortunately, especially by urban audiences. Rekha's Amitabh Bachchan impression is a gutsy one, and again, she is the ONLY reason you may even consider buying a ticket.
Share. Save. Connect.
Tweet
SUPER NANI SNAPSHOT 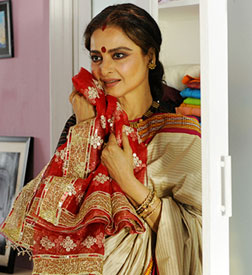 ADVERTISEMENT
This page was tagged for
Super Nani hindi movie
Super Nani reviews
release date
Rekha, Sharman Joshi
theatres list
Follow @fullhyderabad
Follow fullhyd.com on
About Hyderabad
The Hyderabad Community
Improve fullhyd.com
More
Our Other Local Guides
Our other sites
© Copyright 1999-2009 LRR Technologies (Hyderabad), Pvt Ltd. All rights reserved. fullhyd, fullhyderabad, Welcome To The Neighbourhood are trademarks of LRR Technologies (Hyderabad) Pvt Ltd. The textual, graphic, audio and audiovisual material in this site is protected by copyright law. You may not copy, distribute, or use this material except as necessary for your personal, non-commercial use. Any trademarks are the properties of their respective owners. More on Hyderabad, India. Jobs in Hyderabad.