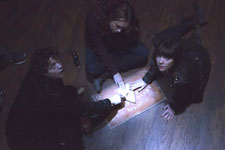 Nupur Barua / fullhyd.com
EDITOR RATING
3.0
Performances
Script
Music/Soundtrack
Visuals
4.0
3.0
5.0
6.0
Suggestions
Can watch again
No
Good for kids
No
Good for dates
No
Wait to rent it
No
It makes complete sense to release a movie titled Ouija during Halloween. And it is not an original idea, either - horror movies are usually much appreciated during this season. In fact, even the title has already been used twice over the past decade or so. Then again, who really looks for originality in a horror thriller? If a movie manages to scare the living daylights out of you, nothing else matters - not the title, not the story, and definitely not the language.

What is unexpected, though, is that it is Hasbro, the American toy and board game company, that has decided to produce Ouija. There is a connection, of course - Ouija is a board game, of sorts - but it is still an unpredictable step to take, for a toy company.

Debbie (Shelley Hennig) has committed suicide, and her best friend, Laine (Olivia Cooke), is devastated. As young girls, they had played with an Ouija board, and although that did not yield any results then, Laine thinks it may be a way to contact the spirit of her dead friend, after she finds a similar board in Debbie's room.

Debbie's parents have left the house that they lived in, and Laine is willing to be the caretaker for a while. She calls over her sister Sarah (Ana Coto), as well as their friends Isabelle (Bianca A Santos), Pete (Douglas Smith) and Trevor (Daren Kagasoff), to use the Ouija board with her. To their shock, they receive a message via the planchette, and they are certain it is Debbie reaching out to them.

Then one of them gets killed, and it throws the rest of them into a frenzy. Unsure of what they did wrong, the surviving group of friends begins to explore the house that they are in. Soon, they discover secrets that they would have rather not known, as they get embroiled in a race against time to stop a malicious spirit from destroying more lives.

The story, as with most horror movie stories, is more than just predictable. It is dull. It follows the age-old formula of killing off the stereotypical characters (hot babe, stud, nerd etc.) before the protagonist figures out the mystery. Once the characters are sitting around the board, you know which one is going to die next. So not much mystery there, nor thrill.

As for the plot points, besides being exactly where you think they will be, they do not add to the intrigue that should be inherent in a horror movie. You really do not want to know, after a point, what happened to Debbie, or even what ails the house. And it is a relief when the characters are killed, because you know you are closer to the end of the movie. Even the sudden twist, unexpected as it is, does not make much sense. The dialogues are monotonous and the fear factor is almost negligible. The whole movie is a half-baked attempt at trying to get you to care about the characters, but you realise you cannot.

The actors do their jobs rather listlessly. Olivia Cooke takes her role as the lead very seriously, and she at least seems sincere. The others just play along without much enthusiasm. The introduction of Vivis Colombetti as the grandmother provides a welcome relief, and the senior actor does her best to raise the standard of the movie, but the screenplay fails her.

The production design is gritty, but nothing spectacular. The whole visual presentation, including the camera work and the costumes, seems to be put together rather indifferently. There are some glimpses of good work in the sound effects, but nothing to write home about. As for the special effects, the less said the better. It is not a very long movie, and the editing is decent, but the film still manages to drag on forever.

The lacklustre movie is a disappointment for those who are looking for some thrills on Halloween. We suggest you visit, on DVD, some of the old slasher movies from the beginning of the century. They still make for better viewing than Ouija, a lame attempt, at best, to thrill you.
Share. Save. Connect.
Tweet
OUIJA SNAPSHOT 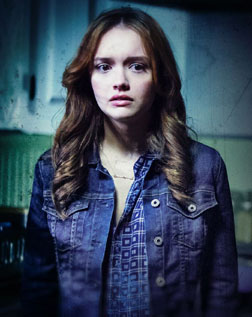 ADVERTISEMENT
This page was tagged for
Ouija english movie
Ouija reviews
release date
Olivia Cooke, Ana Coto
theatres list
Follow @fullhyderabad
Follow fullhyd.com on
About Hyderabad
The Hyderabad Community
Improve fullhyd.com
More
Our Other Local Guides
Our other sites
© Copyright 1999-2009 LRR Technologies (Hyderabad), Pvt Ltd. All rights reserved. fullhyd, fullhyderabad, Welcome To The Neighbourhood are trademarks of LRR Technologies (Hyderabad) Pvt Ltd. The textual, graphic, audio and audiovisual material in this site is protected by copyright law. You may not copy, distribute, or use this material except as necessary for your personal, non-commercial use. Any trademarks are the properties of their respective owners. More on Hyderabad, India. Jobs in Hyderabad.