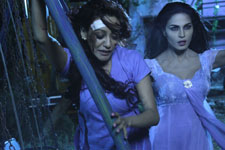 Swayamsrestha Kar / fullhyd.com
EDITOR RATING
3.0
Performances
Script
Music/Soundtrack
Visuals
2.0
1.0
3.0
2.0
Suggestions
Can watch again
No
Good for kids
No
Good for dates
No
Wait to rent it
Yes
This reviewer remembers the days when she, but a wisp of a toddler, would have to watch Aahat from the safety of her sister's lap. There was something undeniably eerie about a woman in white drifting down an empty stretch of road in the middle of the night. Not to forget, there were also those creepy background noises which could easily strike terror in the heart of an 8-year-old.

This reviewer has, since then, grown up into the average Indian film-goer, who ventures forth boldly into the Tarakarama complex on a Friday evening to watch a (presumably) horror movie, without nurturing even a scrap of trepidation, because, hey, this movie was clearly not good enough to be screened by the multiplexes.

Also, where are the innovatively named Darna Mana Hais and Phoonks? Because, let's be real, in India at least, if a film is called Mumbai 125km, and is promoted all over the place as a horror movie, you can already predict the plotline till the interval. And if you commit the tactical error of watching the trailer as well, you can march forth into the theatre without the least bit of fear or even interest.

So, let's get the excruciatingly painful bits of the plot out of the way. Prem (Karan Vohra) and his gang of friends - Vivek, Aashika, Diya and Jaks (the other actors being even more inconsequential for us to remember their names) - are on their way to Mumbai, where they have won tickets for a New Year night party.

There are subtle undertones to the dynamics within the group itself - someone's current girlfriend used to be someone else's ex and so on - and these petty frictions are tastefully demonstrated through the numerous sex scenes scattered throughout the movie - everybody seems to be doing everybody else. It takes you a while to figure all of that out, but then these things generally don't register in a mind which has been subjected to a flying Veena Malik (in 3D, that too).

Which brings us to what is perhaps the dumbest thing about the movie - the ghost herself. We like to believe that we have come a long way from those days when the Ramsay brothers would churn out B-grade horror sex movies which had female supernatural entities (made suitably terror-inducing through the miracles of bad make-up) that looked like a cross between leprosy and Nicki-Minaj-having-a-bad-hair-day. But alas, the Ramsay brothers don't make those epic movies anymore, and all kinds of contenders have rushed in to fill their hallowed shoes.

Which is why we have a deadpan Veena Malik seeking revenge for the death of her family in the most innovative ways possible. She flies around, for a start. Which is not such a good thing if you care to remember - like we mentioned - that you will be watching this movie in 3D.

What you will actually object to, however, is that the makers of this movie thought that a woman, clad in a body-hugging white gown, would spook the living daylights out of you. What is more, this ghost is not only capable of manipulating things around her, she is equipped with advanced powers of an aerodynamic persuasion that would put even Voldemort to shame.

With respect to the script, it's so badly written and edited that you might just want to go back and read a Chetan Bhagat novel, just to assure yourself that you are still literate.

The acting does not fare any better. Karan Vohra is outright irritating as the moody Prem, and the others are just a jumble of heaving bosoms, terrified panting and occasional shrill screams. Veena Malik looks good in that one bikini scene (which is also perhaps the sole selling-point of this movie), and chooses to do nothing more memorable for the rest of the time (thank God for that!).

There are also the bad graphics and the nauseatingly ugly 3D effects to contend with. And if you went thinking that you would get to see some hot women in 3D, there's something really wrong with you! Whatever happened to the good ol' tradition of watching twerking videos on Youtube instead?

In retrospect, Mumbai 125km seems like a bad dream. Surely, nobody in their right mind would have shot a scene where Veena Malik flies in through a window, carries a man out with her and impales him on a tree? They wouldn't, would they?
Share. Save. Connect.
Tweet
MUMBAI 125 KM SNAPSHOT 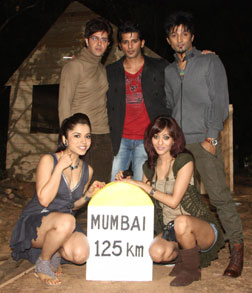 ADVERTISEMENT
This page was tagged for
Mumbai 125 KM hindi movie
Mumbai 125 KM reviews
release date
Veena Malik, Vijay Bhatia
theatres list
Follow @fullhyderabad
Follow fullhyd.com on
About Hyderabad
The Hyderabad Community
Improve fullhyd.com
More
Our Other Local Guides
Our other sites
© Copyright 1999-2009 LRR Technologies (Hyderabad), Pvt Ltd. All rights reserved. fullhyd, fullhyderabad, Welcome To The Neighbourhood are trademarks of LRR Technologies (Hyderabad) Pvt Ltd. The textual, graphic, audio and audiovisual material in this site is protected by copyright law. You may not copy, distribute, or use this material except as necessary for your personal, non-commercial use. Any trademarks are the properties of their respective owners. More on Hyderabad, India. Jobs in Hyderabad.