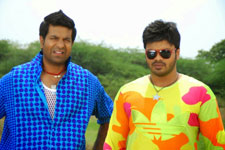 Ravi Kandala / fullhyd.com
EDITOR RATING
4.0
Performances
Script
Music/Soundtrack
Visuals
4.0
2.0
5.0
3.0
Suggestions
Can watch again
No
Good for kids
No
Good for dates
No
Wait to rent it
No
And the Manchu family saga continues. The Bhatts of Tollywood churn out yet another unrepentantly generic film that attempts to pack in something for everyone. Elder brother Vishnu produces this one while the younger one Manoj acts in it. The film is the official remake of a Varuthapadatha Valibar Sangam, a runaway hit in Tamil. After seeing the remake, though, it seems like our makers should've let the original be.

Current Teega suffers majorly from a lack of consistency in tone. The film fails to decide what it wants to be - there is a comic undertone to proceedings but things turn vehemently sentimental in a few instances, and the action sequences are more suited to a Rajamouli movie. There is a scene where Manoj and his father are crying their hearts out and consoling each other, which ends with Manoj's father suddenly saying "Go drink - no sentiment, only entertainment".

There is also no consistency in the characterization of the actors. Manoj flips between being super-human, super-sentimental and super-comedian, and Jagapati Babu flips between villain and comedian.

Rakul Preet Singh does the usual Tollywood heroine shtick, while Sunny Leone's much hyped appearance lasts all of 10 minutes. Sampoornesh Babu, the new superstar, plays a cameo that will leave you in splits.

Manoj uses his favorite music director - Achu - and composes the stunts himself, like in all of his films. The technical values are quite mediocre, with some of the scenes appearing unfinished. The cinematographer too adheres to the lack of consistency reflected in the rest of the film, with some slick visuals and some looking like they were shot on a 2 megapixel camera. The production values are also quite mediocre - the budget of the whole film does not appear much more than what they reportedly paid Sunny Leone for her guest appearance.

Current Teega is a bit like the power situation in Telangana these days - intermittent bursts of power amid several power cuts. Go if you are a Manchu family follower - else, Happy New Year is a better choice. Yes, like that.
Share. Save. Connect.
Tweet
CURRENT TEEGA SNAPSHOT 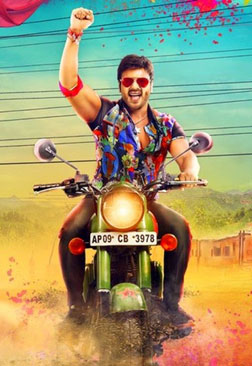 ADVERTISEMENT
This page was tagged for
Current Teega telugu movie
Current Teega reviews
release date
Manoj Manchu, Rakul Preet Singh
theatres list
Follow @fullhyderabad
Follow fullhyd.com on
About Hyderabad
The Hyderabad Community
Improve fullhyd.com
More
Our Other Local Guides
Our other sites
© Copyright 1999-2009 LRR Technologies (Hyderabad), Pvt Ltd. All rights reserved. fullhyd, fullhyderabad, Welcome To The Neighbourhood are trademarks of LRR Technologies (Hyderabad) Pvt Ltd. The textual, graphic, audio and audiovisual material in this site is protected by copyright law. You may not copy, distribute, or use this material except as necessary for your personal, non-commercial use. Any trademarks are the properties of their respective owners. More on Hyderabad, India. Jobs in Hyderabad.