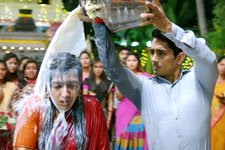 Neema Pramod / fullhyd.com
EDITOR RATING
4.0
Performances
Script
Music/Soundtrack
Visuals
6.0
3.0
5.5
4.0
Suggestions
Can watch again
No
Good for kids
No
Good for dates
No
Wait to rent it
Yes
What is the that magical anti-aging potion that Siddharth seems to be taking? The man doesn't look a minute older than he did in Nuvvosthanante Nenoddantana - and that film released 14 years ago. Seriously, please reveal the secret to us humble mortals!

Well, whatever the potion maybe, it surely works in favour of Vadaladu, for it is only Siddharth's boyish charm that kept me from storming out of the cinema hall (though Catherine Tresa looks like a dream in the movie, too). Well, that and the fact that I had a review to write.

Siddharth plays Jagan - a food safety officer who is too honest for his own good. He has only one dream - a world without adulterated food. In fact, he says as much so many times in the movie that you might be caught mumbling "kalti leni aaharam" in your sleep for the next few days after watching this one. All Jagan needs to do is sniff, and he can tell you not only whether an item has been adulterated, but also what with.

While our hero's job is all about his supreme sense of smell, our heroine - Jyothi (Catherine Tresa) - does not even know what it's like to smell, for she suffers from a medical condition which makes her incapable of perceiving odour. Now this is an interesting situation in itself, and the makers spend the entire first half establishing Jyothi's condition and how it has affected her self-confidence. But it seems like they got bored of it after a while, for they completely disregard this plot-point (and eventually the character) a little before the film touches the halfway mark. An unexpected turn of events restores Jyothi's olfactory abilities, and in turn, her self-confidence (and her eyesight too apparently, for she never wears her glasses after that, either). But before she gets a chance to fully revel in the moment, she gets caught in vortex of events involving a series of murders and a raging ghost, which eventually pushes her out of the screenplay.

The problem with Vadaladu (dubbed from Tamil) is that it is not sure what it wants to be - a classic horror-comedy about a vengeful ghost, a "cute" rom-com about two people who are quite different yet similar to each other (like Jagan, Jyothi too is practically a saint - the kind that goes around burying dead dogs and freeing parrots from the cages of astrologers), or a social commentary about the dangers of food contamination. So the makers go with the easiest solution of 'em all - cram everything into 128 minutes. And the result is an unsatisfying mess of a movie which does not do justice to any of these ideas.

Except for that twist near the interval, every second of the film is predictable, to the extent that you know exactly what the characters will say - word-by-word - before they even open their mouths. The horror angle is so awfully handled - peppered with a generous dose of hilariously bad CGI - that instead of making you shudder in fear, it makes you wince. And the rom-com part is nothing more than your usual love-at-first trope, followed by a bit of stalking - an act which Jagan admits was wrong on his part, but with a smug smile that makes it hard for you to take him seriously.

And then of course, there is the social commentary part. This seems to be the aspect that had interested the makers the most, for you can see the amount of research that has gone into bringing out the concept of food adulteration. The movie even perks up a little here with a few funny one-liners courtesy Sathish (he plays Jagan's co-worker) and Thaman's thumping background score (which sounds eerily similar to that in Police, again dubbed from Tamil) accompanying Jagan's slo-mo walk after every incident of him sealing a restaurant/shop selling contaminated food.

However, good intentions do not necessarily make a good film, and Vadaladu is proof of that. Yes, it is good to give out social messages through the medium of cinema, but shoving them down your throat to such an extent that it makes you want to throw up is surely not the way to do it. The points raised are solid and relevant, but after a while you begin to feel like you are no longer watching a film but sitting through a boring lecture delivered by an over-enthusiastic professor.

Siddharth is earnest as usual, but his earnestness appears funny when he's trapped in a laughably bad film that takes itself way too seriously. And for those who are familiar with his original voice, it might take a while to get used to the dubbing. Catherine Tresa is charming, and manages to make her annoyingly underwritten character somewhat endearing. Her wardrobe is great, too.

The villains - lead by Kabir Duhan Singh - are terribly one-note. A few children show up in the film too as part of a cheap ploy to extract tears from the viewers, but it does not work. Actors like Aadukalam Naresh and Sathish might not be very familiar to the Telugu audiences, but they fit their parts well.

Technically, there is nothing to rave about here. The direction is shoddy, the visual effects are shoddier, and the action-sequences are nothing but a jibe at physics. The music and the score are good - it is only those, coupled with the performances, that make the movie somewhat watchable.

Vadaladu is quite an apt title for this film. It is also what the audiences would want to say if they ever got a chance to meet those who made this one.
Share. Save. Connect.
Tweet
VADALADU SNAPSHOT 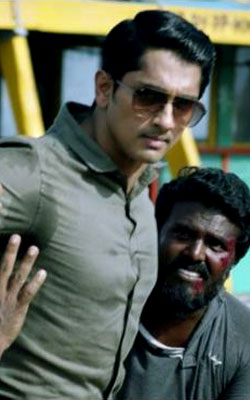 ADVERTISEMENT
This page was tagged for
vadaladu movie download
vadaladu movie telugu download
vadaladu telugu download
movie rule plz 2019 vadaladu cinema
www.vadalodu movie tleugu download.com
Follow @fullhyderabad
Follow fullhyd.com on
About Hyderabad
The Hyderabad Community
Improve fullhyd.com
More
Our Other Local Guides
Our other sites
© Copyright 1999-2009 LRR Technologies (Hyderabad), Pvt Ltd. All rights reserved. fullhyd, fullhyderabad, Welcome To The Neighbourhood are trademarks of LRR Technologies (Hyderabad) Pvt Ltd. The textual, graphic, audio and audiovisual material in this site is protected by copyright law. You may not copy, distribute, or use this material except as necessary for your personal, non-commercial use. Any trademarks are the properties of their respective owners. More on Hyderabad, India. Jobs in Hyderabad.