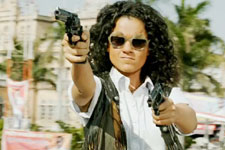 Nupur Barua / fullhyd.com
EDITOR RATING
6.0
Performances
Script
Music/Soundtrack
Visuals
7.0
5.0
6.0
6.0
Suggestions
Can watch again
Yes
Good for kids
No
Good for dates
Yes
Wait to rent it
No
If Vidya Balan was the female Khan a couple of years ago, with The Dirty Picture and Kahaani, then Kangna Ranaut is the female Amitabh Bachchan - the angry young woman with traces of Vijay and Mard, and a bit of Dharmendra, too. After Queen, after which people sat up and took notice of how talented she really is, Kangna Ranaut now stars in Revolver Rani, a masala movie in which she proves that she can be entertaining as well.

Alka Singh (Kangna Ranaut) is a legend, as the title credit montage proves, in the Chambal region and in Gwalior. She is obsessive, and kinky. It is rumoured that she had killed her husband by shooting 14 bullets into his body, because she caught him cheating on her.

Alka Singh fights for the adivasis, and this has made her a pain in the backside for the Tomar brothers, whose eldest was killed by her, and the second of whom, Uday Bhan Singh (Zakir Hussain), has become the Rural Minister. Uday's hot-blooded and idiotic brothers (Kumid Mishra and Pankaj Saraswat) want to kill Alka as revenge, but Uday knows that his position in the ministry is precarious, to say the least, and so he asks them to be patient.

The two idiots then kidnap Rohan Kapoor (Vir Das), the wannabe Bollywood actor, who also happens to be Alka's boy toy, in the hope that she will give in to their demands. In true Hindi film style, Alka rescues Rohan from the goons, and then places him under house arrest, in her house, for his safety.

A news channel wants to interview Alka after she accuses Uday of accepting bribes and rigging elections. Her mentor and maternal uncle, Balli (Piyush Mishra), arranges for the channel to successfully carry out a sting operation on Uday, and re-elections are announced.

Alka, however, becomes indifferent to Balli's ambitions and decides to become a housewife, because she is in love with Rohan. She has already produced a film for him, and now plans to produce another. She has even built a Chambal Film City for him. All through this, the number of people she can trust is diminishing and she becomes more and more reliant on Rohan. What she does not know is that Rohan has absolutely no intention of settling down with her, and he has been using her all this while.

The first half of the movie deals with Alka's kinks and her violent streak. She does not give two hoots about what people say about her, although she does wince at the "barren" tag that she has had to live with, given her lack of progeny. She does not mince words, and is fearless in her metal attire, strange sunglasses, unruly hair and red Pajero.

The screenplay, however, does not give her much to do, besides becoming a caricature of a power-hungry woman. Once it is established that she is dangerous, the story does not go on to prove exactly why she is so feared. From what one can see, she has a heart of gold and a bad temper. So is she then a menace only to the Tomar brothers?

Her feelings for Rohan are not clear. Does she enjoy the sex, or is she looking for a commitment? She does try to explain herself towards the end, but she is so out of character by then that she is not credible at all. The role reversal in her relationship with Rohan is pretty much in-the-face; she does everything a hero would otherwise have done - rescue the distressed lover, provide for the lover, give up stuff for the lover, demand sex from the lover, control the movements of the lover... you get the drift. Her delusional thoughts of grandeur are heightened by the way she orders him around, but the sudden vulnerability in both the characters every now and then is very misleading, and disappointing towards the end.

What the movie lacks is reality, and although that is acceptable to a degree, you cannot help but wishing that the characters were more grounded, even with their guns and expletives (since this is a movie set in the "heartland", abuses are to be expected, and they may be beeped out, but they are there). This lack of intensity in both the narrative and the characters makes the movie slightly confusing.

There is some dark comedy, but there are also long sequences that become tiresome. A lot of the humour, in both dialogues and situations, seems very forced. In the second half, it feels like certain sequences were inserted just to maintain a certain length.

And of course, the comparison with Queen is inevitable, although the two movies belong to very different genres. In Queen, the protagonist has to go out of her bubble to discover herself. In this movie, she remains where she is to figure out who she really is. In Queen, she is liberated. In Revolver Rani, she is trapped in a world of her own making. And finally, in Queen, she is believable, and in this movie, the empathy factor does not manifest itself in the audience. What seems like a feminist movie in the beginning becomes a sad cliché towards the end, unlike Queen.

Revolver Rani, like Queen, is a character-driven movie, and only Kangna Ranaut could have played both roles. She is confident, has perfect coming timing, and is not at all self-conscious even when she has to mouth ridiculous lines. Despite the fake tan and the poor screenplay, she holds the movie together, and your eyes are drawn to her all the time.

Vir Das manages to carve out his own place in the movie, even when he is overshadowed by Ranaut. He oscillates between indifference and moments of tenderness with ease. There are times when he begins to look both resentful and lost, but he is convincing.

Piyush Mishra is very effective, and he does a good job at playing the ambitious kingmaker, as it were. Zakir Hussain, Kumud Mishra and Pankaj Saraswat are the ones who provide the laughter as proud descendants of Prithviraj Chauhan, and the misplaced egos that come with such a legacy. They are terrific as the villains. Look out for their lackey named Doxy. Zeishan Qadri has a smaller role, but he is noticeable as the Michael Jackson wannabe.

Set in Madhya Pradesh, the movie sets out to prove that too much wealth and no sense of aesthetics will only result in gaudy structures and clothes. This gaudiness is portrayed with finesse - from the pool-sized bath tub to the glossy props in the cheesy film studio. The costumes are senseless, but that was the point anyway.

The music is memorable and fun, and the title song is very catchy. The camera work is almost flawless, and some of the visuals are just stunning. The editing loosens up in the second half, and could have been snappier.

Revolver Rani is not a novel movie, although the concept certainly is. If you are not expecting much in terms of intensity, then you must watch it. And if you are a Kangna Ranaut fan, does the story really matter?
Share. Save. Connect.
Tweet
REVOLVER RANI SNAPSHOT 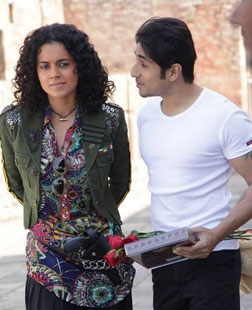 ADVERTISEMENT
This page was tagged for
Revolver Rani hindi movie
Revolver Rani reviews
release date
Kangna Ranaut, Vir Das
theatres list
Follow @fullhyderabad
Follow fullhyd.com on
About Hyderabad
The Hyderabad Community
Improve fullhyd.com
More
Our Other Local Guides
Our other sites
© Copyright 1999-2009 LRR Technologies (Hyderabad), Pvt Ltd. All rights reserved. fullhyd, fullhyderabad, Welcome To The Neighbourhood are trademarks of LRR Technologies (Hyderabad) Pvt Ltd. The textual, graphic, audio and audiovisual material in this site is protected by copyright law. You may not copy, distribute, or use this material except as necessary for your personal, non-commercial use. Any trademarks are the properties of their respective owners. More on Hyderabad, India. Jobs in Hyderabad.