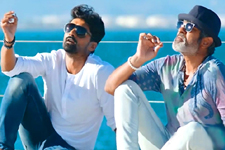 Swaroop Thotada / fullhyd.com
EDITOR RATING
4.0
Performances
Script
Music/Soundtrack
Visuals
6.0
3.0
5.0
6.0
Suggestions
Can watch again
No
Good for kids
No
Good for dates
No
Wait for OTT
Yes
The Guy Fawkes mask used in the film V For Vendetta has a cultural and historical context. Moreover, Hugo Weaving's operatic body language and his hypnotically chiming British accent lent it a charm of its own. Ism borrows the mask, and strips it off its context and aura.

That's forgivable if it is used just as a mask, but we see it turn into an emblem and a flag of the revolution this film is centred on. It feels just like meeting one of those Pawan Kalyan fans wearing Che Guevera T-shirts. And this appears only as a minor problem compared to the film's script.

Sultan aka Kalyan Ram (Kalyan Ram) makes a living on the illegal fight circuit (how else can Kalyan Ram and his six-pack both make a dazzling entry at the same time?) and has a passionate and self-confessed "ladies' weakness". Being a fervent believer of the theory that the passion and ability to chase skirts is the foremost of things that qualify a man as a man, he wastes no time in turning outright creepy, and relentlessly stalks a hot babe Alia Khan (Aditi Arya) until she gives up and falls in love. Because that's how guys get girls according to Puri's manual for courtship.

Alia happens to be the daughter of Javed Ibrahim (Jagapati Babu), the invincible mafia boss and international menace, catching whom is impossible, not because he is a master at hiding, but because his purse is full of influential politicians from all over India. It's no secret that his name is a sly to you-know-who. And given the tomfoolery his character is reduced to, just making him watch this movie is a very harsh punishment for the real life counterpart.

Kalyan Ram parallelly befriends Javed and they become beedi-buddies. Javed, unbeknownst of Kalyan Ram's scheme towards his daughter, actually dishes out advice on how to get chicks. Even he seems to draw from the same Puri manual, as his tips are equally farcical. But is this strenuous an effort really needed to woo a scatterbrain like the heroine? So there must be something bigger in Kalyan Ram's mind, and we are no geniuses for guessing it. And there comes the interval twist.

Ism takes too long to take off. The love track is utterly unengaging, stubbornly insensitive, and unfortunately occupies much of the first half. When a film is titled "Ism" and its promos promise an intense action thriller with a socially conscious tone, it really is suicide to chop off a complete hour from it and feed it to a crippled love routine devoid of any sense or entertainment.

And the film's central theme is no stroke of genius either. For a movie that boasts of being inspired by Snowden and Assange's stories, Ism is too far removed from practicality and plausibility. It talks about big ideas like black money and corruption, but can't help its juvenile understanding of its subject matter being laid bare. The enthusiasm it shows in lecturing its audiences should have been put to use in researching its subject matter and writing more plausible characters. The movie is just another Puri pot-boiler, masquerading as a responsible film.

Kalyan Ram embraces his slick debonair avatar, and moulds himself to fit the Puri hero template. Aditi Arya is helplessly stuck in a pathetically scripted caricature. She is written to annoy the hero, but ends up annoying the audiences, too. Anup Rubens' soundtrack acknowledges the eccentricity of the director, and that's not good news. The loud background score is as silly as the movie itself. A couple of songs however are easy on the ears. Jagapati Babu sleepwalks in a tailor-made role.

Vennela Kishore and Ali make awkward faces most of the time, and that seems apt as most of their jokes fall flat. There is a song in the second half where the heroine, aided by hijras, verbally bashes the hero in a crudely choreographed song. If that is the definition of entertainment for Puri, God save the audiences.

Ism is what happens when a director's version of creativity is a mere glorified display of his idiosyncrasies. It would be foolish-ism to catch this one.
Share. Save. Connect.
Tweet
ISM SNAPSHOT 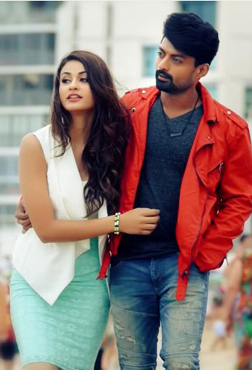 See ISM full details
ISM USER REVIEWS
1 - 7 OF 7 COMMENTS
POSITIVE  |  NEGATIVE |  NEWEST  |  OLDEST  |  MOST HELPFUL  |  LEAST HELPFUL
Jakka on 26th Oct 2016, 7:04am | Permalink
Respect. You guys are the truth in an industry of lies and farce.
Josh on 23rd Oct 2016, 1:16pm | Permalink
"Like one of those Pawan Kalyan fans wearing a Che Guevara T-shirt" made my day!
Sid on 23rd Oct 2016, 7:28am | Permalink
I follow the reviews in this website for all the newly released films. You never disappoint me. I go to the movie based on your reviews. Doesn't matter if you give less rating or more, but I study the gist and see if this is a movie that I would enjoy seeing in the theater. Thanks for the honest reviews.
Swaroop Thotada on 23rd Oct 2016, 5:56am | Permalink
Thank you all for the kind words
a on 22nd Oct 2016, 11:30pm | Permalink
Good review. just get rid of That ridiculously unfunny/boring/spoilerific/ill-informed critic jaiwantika
Hari on 22nd Oct 2016, 9:09pm | Permalink
Loved your review Swaroop. This is what FH should represent. Diss the mainstream movies without constant fear of "hurting fan sentinments". I agree with Complimenter's comment. Wish we see more of these kind of reviews. Enough with these immature male chauvinist crap. Makers need to put some thought into their writing and create story lines and characters that can engage the audience.
Complimentor on 22nd Oct 2016, 2:37pm | Permalink
An honest and passionate review. I wish fullhyd follows the same more often than not.....
LEAVE A COMMENT
fullhyd.com has 700,000+ monthly visits. Tell Hyderabad what you feel about ISM!
MORE MOVIES
Latest Reviews
Don't Worry Darling
Vikram Vedha
Ponniyin Selvan - 1
Naane Varuvean
Nene Vasthunna
more
Krishna Vrinda Vihari
Saakini Daakini
Where the Crawdads Sing
Everything Everywhere All At...
Aa Ammayi Gurinchi Meeku Che...
Brahmastra: Part One - Shiva
Oke Oka Jeevitham
Brahmastra: Part One - Shiva
Ranga Ranga Vaibhavanga
First Day, First Show
Contemporary Reviews
Jack Reacher: Never Go Back
Nandini Nursing Home
Shankara (Telugu)
Ae Dil Hai Mushkil
Kaashmora
more
Shivaay
Dharmayogi
Inferno
Nagabharanam
Motu Patlu - King of Kings
The Accountant
The Girl on the Train
Beiimaan Love
Best Of Luck (Hindi)
Random Reviews
Neethodu Kaavaali
Mitr (Telugu)
Oops! (English)
Lady Bachelors
Mujhse Shaadi Karoge
more
The Leader (Fong Sai Yuk)
Mr. Medhavi
Gambler
Golimaar
Murder 2
Teri Meri Kahaani
The Lone Ranger
Hawaa Hawaai
Maze Runner: The Death Cure
RDX Love
SEARCH MOVIES
Dissatisfied with the results? Report a problem or error, or add a listing.
ADVERTISEMENT
SHOUTBOX!
{{todo.name}}
{{todo.date}}
[
ip{{todo.ip}}
]
{{ todo.summary }}... expand »
{{ todo.text }} « collapse
First  |  Prev  |   1   2  3  {{current_page-1}}  {{current_page}}  {{current_page+1}}  {{last_page-2}}  {{last_page-1}}  {{last_page}}   |  Next  |  Last
{{todos[0].name}}

ADVERTISEMENT
This page was tagged for
ISM telugu movie
ISM reviews
release date
Kalyan Ram, Aditi Arya
theatres list
Follow @fullhyderabad
Follow fullhyd.com on
About Hyderabad
The Hyderabad Community
Improve fullhyd.com
More
Our Other Local Guides
Our other sites
© Copyright 1999-2009 LRR Technologies (Hyderabad), Pvt Ltd. All rights reserved. fullhyd, fullhyderabad, Welcome To The Neighbourhood are trademarks of LRR Technologies (Hyderabad) Pvt Ltd. The textual, graphic, audio and audiovisual material in this site is protected by copyright law. You may not copy, distribute, or use this material except as necessary for your personal, non-commercial use. Any trademarks are the properties of their respective owners. More on Hyderabad, India. Jobs in Hyderabad.