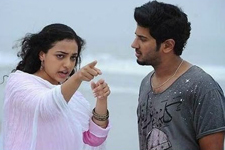 Ravi Kandala / fullhyd.com
EDITOR RATING
7.0
Performances
Script
Music/Soundtrack
Visuals
8.0
5.0
8.0
8.0
Suggestions
Can watch again
Yes
Good for kids
No
Good for dates
Yes
Wait for OTT
No
April 2000: Sakhi releases. April 2015: Mani Ratnam decides to release another romantic movie with a young pair. The music of this one has been said to be suspiciously similar to that of Sakhi. The trailer, especially the scenes in the trains, reminded people of Sakhi. So is Okay Bangaram a Sakhi redux? This was the question uppermost in people's minds.

Well, let's see. The hero in Sakhi starts a software company with friends and is waiting for a huge project from the US. Adi (Dulquer Salman), the hero in Okay Bangaram (OKB for short), works for a gaming company and has an idea for a computer game - he's given six weeks to develop a prototype that will give him a chance to go to the US.

So, yes, Okay Bangaram resembles Sakhi in many ways - thankfully, also in the fact that it is a good watch. Mani Ratnam, after a string of duds, returns to romance and proves that he is the king. However reluctant the man is to accept that title, this seems to be the genre that brings the best out of him. And he again proves that he's the best when it comes to extracting performances from his cast and his technicians.

So while the plot is simple - a young couple who do not believe in marriage and believe that their professional lives will be hindered if they get married learn that they are wrong and are happy to change their thought process - Dulquer Salman and Nitya Menon put in outstanding performances, bringing it all spectacularly to life. The chemistry between them just jumps out of the screen and grabs you by the throat. We've praised Menon earlier, but she just surpasses herself here and puts in a performance that will make you sit up. Salman looks much better than his dad (he's Mammooty's son, for the uninitiated) and puts in a competent performance. Nani's dubbing for the character is fantastic - you will not realise for one scene that you know the voice. Prakash Raj and Leela Samson support the couple ably.

The output from P C Sreeram and A R Rahman is fantastic. Mumbai seems a different city through PC's lens, and Rahman takes the movie to the next level with his BGM. The songs are avowedly peppy - many people have gone so far as to say that this is Rahman's best work in recent times. The only dampeners in Okay Bangaram are the super-simplistic (and recycled) plot and the pacing.

Finally, through the movie, you feel that Mani Ratnam should seriously start a film school - right from extracting performances to setting the lighting patterns to composing frames, everything is done just right in his films, and so many young filmmakers could learn from him. But we'll hold on to that thought - for now, just go and watch this one. And try and put Sakhi out of your mind, and you will enjoy this one that much more!
Share. Save. Connect.
Tweet
OK BANGARAM SNAPSHOT 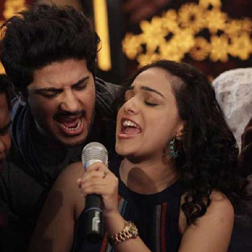 See Ok Bangaram full details
OK BANGARAM USER REVIEWS
1 - 2 OF 2 COMMENTS
POSITIVE  |  NEGATIVE |  NEWEST  |  OLDEST  |  MOST HELPFUL  |  LEAST HELPFUL
USER RATING
9.0
1 USER
Performances
Script
Music/Soundtrack
Visuals
NA
NA
NA
NA
Can watch again - NA
Good for kids - NA
Good for dates - NA
Wait for OTT - NA
GBP on 27th Apr 2015, 12:30pm | Permalink
The music is just out of the world, the review says "The music of this one has been said to be suspiciously similar to that of Sakhi"??, firstly you are unfit to comment on music of ARR-MANI movies, so this movie is a cool breezer at the onset of summer. Just enjoy guys.
Hari on 19th Apr 2015, 9:40pm | Permalink
Review is spot on (for me). Nithya Menon's performance is indeed stunning in it's subtlety.
You really get hooked on to that character. Hoping to see her under good directors who give importance to performances. Everyone else is great too. No one really let down in the acting dept. 10/10.
ARR again produces jaw dropping output in BGM and songs. On screen, the music makes for an immersive experience.
Mani Ratnam is just different from other directors!!! You get to see magic in his movies.
Do not miss this one.

ADVERTISEMENT
This page was tagged for
ok bangaram telugu movie 11
watch ok bangaram full movie
ok bangaram full movie
Ok Bangaram telugu movie
Ok Bangaram reviews
Follow @fullhyderabad
Follow fullhyd.com on
About Hyderabad
The Hyderabad Community
Improve fullhyd.com
More
Our Other Local Guides
Our other sites
© Copyright 1999-2009 LRR Technologies (Hyderabad), Pvt Ltd. All rights reserved. fullhyd, fullhyderabad, Welcome To The Neighbourhood are trademarks of LRR Technologies (Hyderabad) Pvt Ltd. The textual, graphic, audio and audiovisual material in this site is protected by copyright law. You may not copy, distribute, or use this material except as necessary for your personal, non-commercial use. Any trademarks are the properties of their respective owners. More on Hyderabad, India. Jobs in Hyderabad.