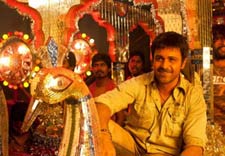 Nupur Barua / fullhyd.com
EDITOR RATING
6.0
Performances
Script
Music/Soundtrack
Visuals
7.0
6.0
6.0
7.0
Suggestions
Can watch again
Yes
Good for kids
No
Good for dates
No
Wait for OTT
No
Renowned columnist Doug Larson once famously said, "Instead of giving politicians the keys to the city, it might be better to change the locks". And as filmmakers such as Dibakar Banerjee will remind you, it is time we understood why we need this change.

Based on a book named Z, by Greek writer and diplomat Vassilis Vassilikos (yes, the director acquired the rights), Shanghai is Dibakar Banerjee's attempt at a political thriller. The title of the movie is obviously inspired by the promises that politicians once made, to make Mumbai as modern as Shanghai. The story in the film, however, is not set in Mumbai, but in a nameless Indian city - a prototype of any city in this country - whose inhabitants cannot think for themselves, a fact that those in power take advantage of.

This anonymous city is governed by the coalition IBP, and the Chief Minister of the state, known only as Madamji (Supriya Pathak Kapoor), leaves the running of her local affairs to Damle (Kiran Karmakar). Damle encourages mob mentality, and has a huge army of goons to carry out protest marches and to initiate riots.

Tragedy strikes when social-activist-doctor Ali Ahmedi (Prosenjit Chatterjee) visits the city and teams up with his ex-student, Shalini (Kalki Koechlin). TA Krishnan (Abhay Deol), an IAS officer and a favourite of Madamji's, is asked to head an enquiry commission into an incident that follows. Shalini, meanwhile, conducts her own investigation, and finds an unlikely ally in Joginder Parma (Emraan Hashmi), a small-time videographer from Bharat Nagar, the locality of the goons.

As Krishnan, Shalini and Jogi try to piece things together, inevitably heading towards joining forces, they discover the dirt and the grime that politics is made of.

Nothing in the film is either shocking or revolutionary, and the narrative is almost matter-of-fact, but it will still make you cringe. Especially the focus on the protestors - they seem as familiar as your next-door neighbour. The script is almost flawless, but certain jargon may seem alien, and the climax is a bit of a let-down. Defying those in power, especially in this country, can only lead to dire consequences, but the characters in Shanghai get away relatively easy.

The unconventional casting for the movie has been in the news for a while, and for good reason. Abhay Deol plays a Tamil man, who also has to mouth Tamil words every now and then. He tries his best to speak Hindi and English with a Tamil accent, and does a decent job, with a few slip-ups here and there. His portrayal of a man caught in a political mess is convincing.

Kalki Koechlin plays a young woman who has had an affair with her mentor. She is not quite Indian, and therefore defiant and foolish enough to take on the powers that be, and this she plays with ease.

Emraan Hashmi, with stained teeth and a paunch, is such a far cry from his romantic hero image that you wonder why the Bhatts made him a poster boy. This has to be his best acting till date.

Farooque Shaikh is a superior actor, as is Tilottama Shome, who plays Mrs Ahmedi. Prosenjit Chatterjee lights up the screen for the short while that he is on it, and Supriya Pathak Kapoor, in a cameo as Madamji, is unforgettable.

The only actor who does not get his share of quality screen time is Kiran Karmakar. Pitobash Tripathy makes a mark, again, as the scum of the slums, and Anant Jog, for once, plays a victim of his own wrongdoings.

Given the anonymity of the city that the story is based in, production design is as good as it can get. The kitsch and the loudness is well captured, enough to turn your stomach, which is what the movie aims to do. Cinematography is impressive.

The music is nothing to write home about, but Bharat Mata Ki Jai is already a hit (the impact of the song in the story, however, is sort of lost).

This is not Dibakar Banerjee's best work, but is worth a watch. Shanghai will make you flinch and squirm, and remind you that this country is going to the dogs (read politicians), literally, unless you can do something about it.
Share. Save. Connect.
Tweet
SHANGHAI (HINDI) SNAPSHOT 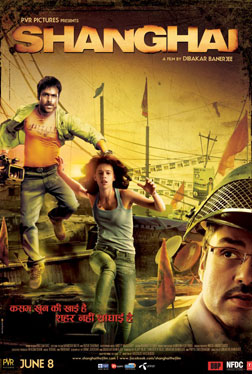 ADVERTISEMENT
This page was tagged for
Shanghai (Hindi) hindi movie
Shanghai (Hindi) reviews
release date
Abhay Deol, Prosenjit Chatterjee
theatres list
Follow @fullhyderabad
Follow fullhyd.com on
About Hyderabad
The Hyderabad Community
Improve fullhyd.com
More
Our Other Local Guides
Our other sites
© Copyright 1999-2009 LRR Technologies (Hyderabad), Pvt Ltd. All rights reserved. fullhyd, fullhyderabad, Welcome To The Neighbourhood are trademarks of LRR Technologies (Hyderabad) Pvt Ltd. The textual, graphic, audio and audiovisual material in this site is protected by copyright law. You may not copy, distribute, or use this material except as necessary for your personal, non-commercial use. Any trademarks are the properties of their respective owners. More on Hyderabad, India. Jobs in Hyderabad.