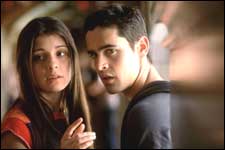 Mithun Verma / fullhyd.com
EDITOR RATING
3.0
Performances
Script
Music/Soundtrack
Visuals
NA
NA
NA
NA
Suggestions
Can watch again
NA
Good for kids
NA
Good for dates
NA
Wait for OTT
NA
Psychopath lovers were discovered by Hollywood filmmakers several decades ago when they had absolutely nothing else to do. Since then, these sadistic nutcases have often made creepy appearances in cinema. Not only them, even their discoveries, i. e. psychopath lovers, also made their appearances. And they still continue to appear relentlessly, both of them.

Ben (Jes-oh-so-chocolaty-se Brad-oh-boy-I'm-the-stuff-ford) is oh-so-chocolaty and oh-boy-he's-the-stuff. Burying the invisible attitude, he is the undisputed swim-team star of an upscale school in the New York suburbs. He's all set to get into a posh college, but has to prove his worth in the pool before that. Too bad good-looking doesn't count there. But it counted at a point when it mattered the most - when he was signing up for this movie.

His good looks are matched by Amy (Shiri Appleby - Roswell) who is also lamenting the fact that cute doesn't count for much these days, unless you're a puppy. She certainly isn't. That doesn't mean she never tried hard. She had to stick a tail and wag it, but did not know which muscles to move. The only muscles she ever moved with Ben around were her lip muscles. And a tail is not supposed to be at that end, it seems.

However, their perfect life with all the muscles and their movements comes to a jarring cramp with the arrival of the mad Madison (Erika Christensen). Madison at first appears to be just another pretty face and a hot body. All that changes as the plot progresses forward. She's shown at some really close-up shots. That's how we also know she'll soon turn Ben's life into a nightmare. She makes him make out with her in the pool. Man, that is a nightmare!

And somehow everything after that seems to go haywire for Ben. He doesn't make it to the big college, his girl starts hating him and he's a prime suspect in a murder. But like all the great heroes of his generation, he doesn't cry about it. Or at least he cannot clearly portray what he's feeling. Instead, he comes out with an incredibly improbable climax for the movie.

We can take some solace in the fact that they do not try to show the details of how Madison goes about ruining everything that Ben had. If that is not shown, how can it make sense, you ask? It makes the movie shorter, what more sense does anyone need?

The one feature going for the film is the length - only 85 minutes. If it were any longer, it would've been a great disaster. Not that it already isn't, but because your beauty-sleep is only supposed last for that long.

ADVERTISEMENT
This page was tagged for
Swimfan english movie
Swimfan reviews
release date
Jesse Bradford, Erika Christensen
theatres list
Follow @fullhyderabad
Follow fullhyd.com on
About Hyderabad
The Hyderabad Community
Improve fullhyd.com
More
Our Other Local Guides
Our other sites
© Copyright 1999-2009 LRR Technologies (Hyderabad), Pvt Ltd. All rights reserved. fullhyd, fullhyderabad, Welcome To The Neighbourhood are trademarks of LRR Technologies (Hyderabad) Pvt Ltd. The textual, graphic, audio and audiovisual material in this site is protected by copyright law. You may not copy, distribute, or use this material except as necessary for your personal, non-commercial use. Any trademarks are the properties of their respective owners. More on Hyderabad, India. Jobs in Hyderabad.