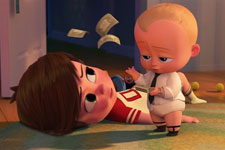 Vaishnavi Kulkarni / fullhyd.com
EDITOR RATING
8.0
Performances
Script
Music/Soundtrack
Visuals
8.0
8.0
6.0
8.5
Suggestions
Can watch again
Yes
Good for kids
Yes
Good for dates
No
Wait for OTT
No
The true test of an animated flick is how it appeals to both children and adults. Dreamworks has delivered movies loved by the little ones and their parents alike, from the classic Shrek to How To Train Your Dragon. Now, with Tom McGrath The Boss Baby (McGrath is the man behind the Madagascar series), you get a movie that surprisingly manages to hit it off with the grown-ups a little more than with the kids.

The Boss Baby is a movie that people with a younger sibling would find relatable on some level or another. For the blissful only child, basking in the undivided attention of his/her doting parents, three is company and four's a crowd. If you have heard the words "Mommy and Daddy have a surprise for you" only to find out that the surprise is a tiny incarnation of the Devil who makes your parents sell their souls - and sleep - to appease the little terror while you get shunted to the side lines, it is easy for you to identify yourself with young Timothy Leslie Templeton (Miles Bakshi, and Toby Maguire as adult narrator Tim).

Tim, son of the loving couple voiced by Lisa Kudrow and Jimmy Kimmel, leads an idyllic life, often in a world of his own - he has a vivid imagination, and the contrast shown between the world as seen through his eyes and the reality observed by his parents is amusing to watch. He is the apple of his parents' eyes, tucked in every night with hugs and kisses and a special song (though thankfully not Smelly Cat - a musical favourite of another character once played by Kudrow).

The baby soon arrives, bawling at the top of its tiny lungs and bossing everybody around, and Tim's overly active imagination paints the story of a Boss Baby (Alec Baldwin) - come straight down to the Templeton household via a binky teleporter from the hallowed halls of Baby Corp on an undercover mission.

The Boss Baby is a hardened suit (perhaps onesie is a better word) of the corporate baby world, and he does not like to share (he's been to Business School, after all). Tim's version of his little brother reinforces all his fears - that the new arrival will take away all his parents' affection and attention while he is left with nothing.

The plot, involving Tim and the baby grudgingly teaming up to foil a scheme by the adult version of Super Colossal Big Fat Boss Baby, Francis E Francis (Steve Buscemi), is rather weak. The duo make their way to Las Vegas to accomplish Boss Baby's mission - to prevent Francis from launching the forever-young puppy, one that would steal all the love away from babies. The storyline is adequate for keeping the children entertained but not really something that can capture the interest of the more mature audiences.

What makes The Boss Baby an engaging watch for the adults is the sibling relationship dynamics, the family relationships reflected off a child's mindset, mixed with frequent doses of humour. There are intelligent jokes and a few scenes rife with innuendo that have you laughing out loud, along with the kind of slapstick comedy that has both you and your children in stitches.

But the budding fraternal relationship between the two brothers, the real part amidst all the make-believe, is what makes The Boss Baby a film that makes you tear up a little through all the irreverent fun. The slow and subtle transition from mistrust to camaraderie to love is nuanced and utterly true to life.

Alec Baldwin as the baby is perfection - there is something inherently hilarious about hearing his deep, sophisticated, no-nonsense voice coming from an adorable infant. His comic timing is impeccable, and the variation of feelings expressed in his voice is in tune with his animated, diaper-clad alter-ego. Bakshi has done an admirable job, too, giving the young and emotional character of the unwilling big brother a real feel. Steve Buscemi sounds sufficiently evil and dastardly, and Kimmel and Kudrow play their supporting roles well.

True to Dreamworks' standards, the animation is beautiful. The bright and colourful scenes from the fancies of Timmy's imagination, from parrying the blows of pirates on the high seas to baby battles, are a treat for the kids. The characters are life-like, and their detailed, genuine expressions almost make you believe that they are real. The baby makes you coo adoringly at his cuteness, while little Timothy invokes your sympathy for his mid-childhood crisis. The musical score is not particularly memorable - it simply gives a nice beat to the pace of the movie.

Whether you have a younger sibling yourself, or have "surprised" your child with a mini-monster swaddled in blankets and baby powder, make sure you watch this movie. If not, watch it anyway!
Share. Save. Connect.
Tweet
THE BOSS BABY (3D) SNAPSHOT 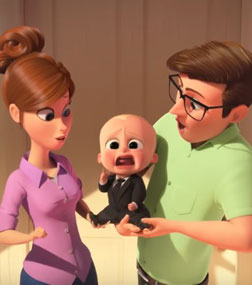 ADVERTISEMENT
This page was tagged for
The Boss Baby (3D) english movie
The Boss Baby (3D) reviews
release date
Baldwin, Steve Buscemi
theatres list
Follow @fullhyderabad
Follow fullhyd.com on
About Hyderabad
The Hyderabad Community
Improve fullhyd.com
More
Our Other Local Guides
Our other sites
© Copyright 1999-2009 LRR Technologies (Hyderabad), Pvt Ltd. All rights reserved. fullhyd, fullhyderabad, Welcome To The Neighbourhood are trademarks of LRR Technologies (Hyderabad) Pvt Ltd. The textual, graphic, audio and audiovisual material in this site is protected by copyright law. You may not copy, distribute, or use this material except as necessary for your personal, non-commercial use. Any trademarks are the properties of their respective owners. More on Hyderabad, India. Jobs in Hyderabad.