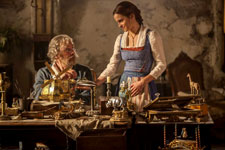 Vaishnavi Kulkarni / fullhyd.com
EDITOR RATING
8.5
Performances
Script
Music/Soundtrack
Visuals
8.0
7.5
9.0
8.5
Suggestions
Can watch again
Yes
Good for kids
Yes
Good for dates
Yes
Wait to rent it
No
Disney has perfected the art of minting money off films that had already raked it in in their heyday - take a blockbuster animated classic and turn it into a live action movie. This tried and tested formula is derived from two assumptions: that kids will be kids and will always love a good fairy tale, and that grown-ups won't be able to resist the nostalgic joy of watching a retelling of a childhood favourite. And by God, it works. Thank heavens it does, too.

The charming tale that had enchanted you as a child (perhaps you watched it around 5 times over the week that you rented it, and knew all the songs by heart, too) is back in all its glory - with the same songs, characters and visuals that enthralled you all those years ago, with a few new elements thrown into the mix. Bill Condon's Beauty And The Beast may not be a revelation or a game-changer in filmmaking, but you leave the theatre happy and carefree, unable to leave the magic of the music fully behind.

It seems pointless to go into the plot - it is, after all, a "tale as old as time" - but for those of you who have been living under a bell-jar (get it? because the rose is under a bell-jar? never mind.), here goes.

The beatific Belle (Emma Watson) is an unfortunate resident of a small French town, living an ordinary provincial life that she loathes. She is pretty much the embodiment of the "I'm not like other girls" cliché, and while the snowflakes who generally consider themselves so special are met with an eyeroll, Belle is 100% right in her assessment - the rest of the villagers, quite simply, are pure evil.

Belle is a pariah in her village of illiterate busybodies; they hate her for reading, dreaming and, well, thinking (the three mistakes a woman must NEVER make). Gaston (Luke Evans), who is pretty much the personification of the spirit of the village, is the epitome of toxic masculinity - he cannot stand the idea of a woman who does not worship him, and is determined to make Belle his wife by fair or foul (scratch fair, entirely foul) means.

Shunned and scorned by all but her sweet, eccentric Papa (Kevin Kline), Belle is a lonely soul. Speaking of lonely souls, we soon make our acquaintance with the Beast (Dan Stevens). Everyone in the movie is rather obsessed with roses, the Beast most of all. When Papa Maurice commits the unforgivable crime of picking a rose, the Beast throws a tantrum and locks him up (over-reaction, much?), later swapping him out for Belle.

After his initial outburst passes and he and Belle bond over vicious wolf attacks, the Beast reveals himself to be, in his heart of hearts, an awkward teenage boy with a crush on a lovely girl. He makes bad jokes, steals shy glances, moons about dreaming of Belle and is generally adorable.

The gradual progression of their inevitable love story is cute and believable, with their shared love for books and their heart-breaking trip to Paris (a nice touch that the original lacked - a peek into Belle's backstory) - and aided and abetted by the sentient furniture.

There is trouble in paradise soon enough, however, when Gaston, winner of the No-Belle Prize, rears his ugly head. Scenes of a violent nature ensue that may startle some of the younger audiences, but love does triumph in the end - it's Disney, after all. Everyone gets their happily ever after - even LeFou (Josh Gad) ends up in the arms of a handsome hunk. (Thankfully NOT Gaston. Ms. Garderobe was right - you are way too good for him, LeFou.)

Emma Watson does a brilliant job at bringing one of Disney's most beloved heroines to life. She is lively and relatable, with an infectious smile and fierce spirit. She makes a wonderful Belle, independent and strong with the heart of a dreamer. Dan Stevens does well reflecting the kind-hearted man that lies behind the frightening exterior through the Beast's human eyes and words. He makes you, like Belle, look past the fur and fangs and see the beauty underneath.

Luke Evans is a memorable villain; he poses a sharp contrast to the Beast by being rotten to the core on the inside despite his rakishly good looks and brutish charm. Josh Gad plays the part of his enamoured sidekick perfectly, with good comic timing. Kevin Kline as Maurice is delightfully absent-minded, and Ian McKellen and Ewan McGregor are a hilarious pair as Cogsworth and Lumiere.

The film has songs that will play in a loop in your head long after you see the movie. Fans of the original may find themselves singing along to classics like "Belle" and "Something There", while the newer additions to the fandom get a new favourite soundtrack. The music sets the tone of each scene, and is as much a part of the experience as the characters themselves.

The visual effects in the movie are a delight, particularly for children. From the towering castle to the fearsome Beast, the VFX does justice to the grandiose story. The Beast could have been better; he does not seem as realistic as you would expect him to be, coming from the producers of the Jungle Book live action movie.

The song "Be Our Guest" is accompanied by colourful and vibrant effects reminiscent of the animated classic - and since we're on the topic, we're pretty sure that Lumiere put something rather more questionable than beef ragout on Belle's plate. You cannot see that many swirling lights without being at least a little high - it makes no sense. Although, this is a movie about cursed princes and talking furniture, so maybe it does. 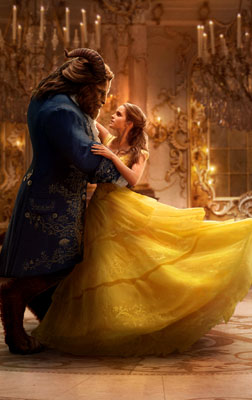 For the dreamy eyes,
It's a wonderful feast;
Warm as the morning sun,
Rising in the east;
It's about a brave girl,
Fettered in the least;
The movie that was,
The Beauty and the Beast;

A haughty prince - cursed to a beast form, by an enchantress and lives with his loyal subjects in a haunted and forgotten castle;
A beautiful girl - brave , inquisitive, well read, who loves her father and is tired of her provincial life;
A shallow man - who can think of nothing but himself, who wants to marry the girl, and would go to any extent to get the woman who doesn't want to be his wife;
A doting father - whose daughter means everything to him and he mistakenly wanders into the castle that in turn starts a series of events which form the rest of the movie.

It is a visual treat to all fairytale lovers and the graphics are top notch. The songs are sweet and so are all the characters in the castle. There's situational comedy even under most dire circumstances. It's Emma Watson who shines bright in the whole movie and is utterly beautiful and charismatic.

ADVERTISEMENT
This page was tagged for
Beauty And The Beast (2017) english movie
Beauty And The Beast (2017) reviews
release date
Emma Watson, Dan Stevens
theatres list
Follow @fullhyderabad
Follow fullhyd.com on
About Hyderabad
The Hyderabad Community
Improve fullhyd.com
More
Our Other Local Guides
Our other sites
© Copyright 1999-2009 LRR Technologies (Hyderabad), Pvt Ltd. All rights reserved. fullhyd, fullhyderabad, Welcome To The Neighbourhood are trademarks of LRR Technologies (Hyderabad) Pvt Ltd. The textual, graphic, audio and audiovisual material in this site is protected by copyright law. You may not copy, distribute, or use this material except as necessary for your personal, non-commercial use. Any trademarks are the properties of their respective owners. More on Hyderabad, India. Jobs in Hyderabad.