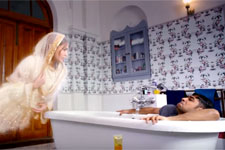 Vaishnavi Kulkarni / fullhyd.com
EDITOR RATING
5.5
Performances
Script
Music/Soundtrack
Visuals
5.0
4.0
6.0
6.0
Suggestions
Can watch again
No
Good for kids
No
Good for dates
Yes
Wait for OTT
Yes
There are certain movies that sweep you away in a whirlwind of brilliance and leave you with a sort of stunned, enlightened feeling - the feeling that you have just experienced something out of this world.

Anshai Lal's Phillauri is most certainly not one of these movies, despite having plenty of other-worldly ideas thrown into the mix. It is a movie with a unique and intriguing theme, gone wrong because of its languid pace, and acting that you would pay to NOT see.

There are a few ground rules for watching (and with any luck, reasonably enjoying) this film - the dos and don'ts of Phillauri:

1. Don't expect realistic scenarios
2. Do go with a group of friends, loaded with sarcastic ammunition to destroy this film with hilarity
3. Don't go if you have anything else at all to do

Now that you have been fairly warned, let's proceed to the first half of the movie and its plot. Or lack thereof - it is so pointless, fragmented and slow that it would have made hardly any difference had it been almost entirely cut out of the story, except perhaps reducing the whopping viewing time by about 50%.

The movie starts out with a dream sequence that gives you second-hand embarrassment - and it is a testament to how truly awful Suraj Sharma's acting as Kanan is that the rest of the first half makes you cringe even more than the dream (featuring public humiliation) did.

Kanan, the groom, takes a trip (pun intended - the man's biggest passion in life is getting stoned) from the Great White North to the House Of Punjabi stereotypes unleashed in full force - 'tis the season for weddings, after all. Its features of interest include a cloyingly sweet bride (Anu, played by Mehreen Pirzada) whose only goal in life has been to marry Kanan, a caustic grandmother who could give Olenna Tyrell a run for her money and Cersei Lannister a run for her drinking problem, and plenty of free-flowing alcohol.

Kanan proceeds to behave like he is competing for the title of Worst Fiance Ever - he is whiny and condescending, and spends his first evening with his girlfriend after being apart for three years hiding away on the roof and smoking a joint, because according to this young man in his mid-twenties, "it looks cool".

Because everyone in charge is apparently certifiably insane (not really - they just take horoscopes way too seriously), Kanan is made to marry a tree (yes, this is literally what happens), and ends up accidentally wed to the spirit who haunts it, aka Ghost of Centuries Past (Anushka Sharma).

This star of The Young And The Dead Restless is fond of showing off her superhuman strength and wicked powers of teleportation, and sparkles more than Edward Cullen. There is a caveat involved, however - Ghost Protocol Article #666, Section Bollywood clearly states, "A spirit may only sparkle and be pretty and lit if he/she was at the centre of a tragic tale of lost love when he/she was alive. Being the protagonist of a movie about you also helps boost the Glitter Gauge reading."

Shashi is the mother of all holier-than-thou judgemental folk - she judges a bride for her dress, a party for its booze and a singer for his lyrics, conveniently forgetting that she once basically snuck out to attend a village 'concert'. She was pretty much the quintessential rebellious teen.

After a proper introduction that scares the living daylights out of Kanan, Shashi gives us glimpses into her life with flashbacks that are utterly disjointed from the present and give the movie the feel of being on a bumpy ride over a pothole-ridden road. They form a more seamless narrative in the second half, however, and this is where the movie picks up pace.

We watch a touching love story of poetry and music unfold, set in a time when artistic inclinations meant social suicide for a woman and love was often a forbidden thrill. In the quiet village of Phillaur, Shashi gradually falls in love with Diljit Dosanjh's onscreen persona (known by the world as Phillauri) as he turns his life around and works to become a man worthy of Shashi. The emotions are subtle and well-expressed, and you feel invested in their tale, dreading the inevitable end that Shashi's ghostly form foreshadows.

The movie has elements of suspense and mystery thrown in, and ends on a positive note, though it takes its sweet time getting there. The end is tediously drawn out. With Shashi's spectral form transitioning from floating to flying, from laughing to crying, and from black and white to life in technicolour, it is however a wild ride till the end.

Shashi's and Phillauri's tale is the most well-written part of the movie, and the film fails to use that to its advantage, dwelling far too long on the largely irrelevant and irritating happening of the present. Anushka Sharma is not at her best, but delivers well with her expressive eyes and feisty attitude. Diljit Dosanjh, though at times slightly wooden in his acting, does a fair job overall. The cameo by a horrifying (true) historical event as the scene of the tragic end to a fictional love story is a nice touch.

Suraj Sharma, on the other hand, is so devoid of expression and emotion that poker players could take a cue from him. Mehreen Pirzada gets on your nerves with her perpetually tear-filled eyes and her annoyingly childish mannerisms.

The movie has some beautiful songs with meaningful lyrics - songs like Sahiba are a far cry from the inane rap that Bollywood usually doles out. The cinematography of the flashbacks is charmingly rustic, as opposed to the present-day scenes which are garishly loud and gaudy.

Phillauri is an entertaining watch - though it would probably help if you're along for Kanan's "trip" of choice.
Share. Save. Connect.
Tweet
PHILLAURI SNAPSHOT 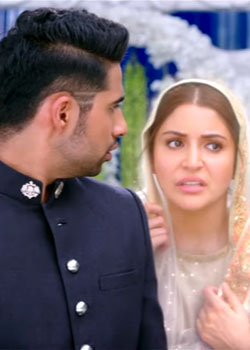 ADVERTISEMENT
This page was tagged for
Phillauri hindi movie
Phillauri reviews
release date
Anushka Sharma, Diljit Dosanjh
theatres list
Follow @fullhyderabad
Follow fullhyd.com on
About Hyderabad
The Hyderabad Community
Improve fullhyd.com
More
Our Other Local Guides
Our other sites
© Copyright 1999-2009 LRR Technologies (Hyderabad), Pvt Ltd. All rights reserved. fullhyd, fullhyderabad, Welcome To The Neighbourhood are trademarks of LRR Technologies (Hyderabad) Pvt Ltd. The textual, graphic, audio and audiovisual material in this site is protected by copyright law. You may not copy, distribute, or use this material except as necessary for your personal, non-commercial use. Any trademarks are the properties of their respective owners. More on Hyderabad, India. Jobs in Hyderabad.