Ghost In The Shell Review 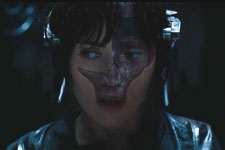 Vaishnavi Kulkarni / fullhyd.com
EDITOR RATING
6.5
Performances
Script
Music/Soundtrack
Visuals
6.5
6.0
5.0
8.0
Suggestions
Can watch again
No
Good for kids
No
Good for dates
No
Wait to rent it
Yes
Rupert Sander's venture into anime adaptations was met with a lot of controversy - the whitewashing of the original Japanese characters in Ghost In The Shell ruffled quite a few feathers. Yet, the movie fails to live up to all the hype created by the controversy, and is a long-winded and a rather dull story set in an admittedly awesome futuristic universe.

Ghost In The Shell begins with a sequence that fans of Westworld will find eerily familiar - an automaton being crafted by sleek robotic arms as the opening credits appear. We learn that this imaginary version of the future holds cyber enhancements for humans, with Hanka Robotics taking the lead in advancements in this technology.

We meet the soul a. k. a. ghost of Mira Killian (Scarlett Johansson), gasping for breath in her new synthetic shell. According to Dr. Ouelet (Juliette Binoche), Mira was in a near-fatal crash that only her brain could survive. She undergoes a brain transplant, and is the first of her kind, a race of cyborgs that are a whole other kind of AI - combining the agility, strength and superhuman abilities of an artificial body with the compassion and creativity of human intelligence.

It's a year later, and Mira is now Major Killian (referred to simply as the Major), part of Section 9 (an anti-terrorism squad) and working with Batou (Pilou Asbaek) under Chief Aramaki (Takeshi Kitano). Her new body comes with a ton of cool features like an inbuilt invisibility cloak - and apparently a diving board, too, judging by how much she enjoys jumping headlong into the thick of things - literally.

At a conference, some geisha robots are mysteriously hacked, and go from tea party to murder mania real quick. The Major steps in to rescue Hanka employee Dr. Osmond, but is too late. People getting hacked and turning into killers while the perpetrator stays shrouded in the shadows is a recurring theme in this film - one that soon gets on your nerves, as it does nothing but prolong the movie unnecessarily.

Killian ultimately does confront the hacker (Michael Pitt) - but what she finds is not what she (or you) expect. The truth behind the memories disguised as code glitches that her mind is periodically cleared of, Hanka Robotics, and her past, slowly begins to come to light. Already struggling to reconcile her humanity with her alien, cybernetic shell, the Major realises that she is perhaps being controlled far more deeply that she had bargained for.

Together with a few loyal companions, Killian fights back against the true villains - taking control of her past, present and future while doing so.

The movie fails to be gripping enough despite a good premise. The characters lack strong personalities that would leave an impression on the viewer, and are easily forgettable. Interpersonal relationships between them are poorly developed, resulting in you being unable to relate to the characters on an emotional level. The plot never seems to gain momentum, meandering along at a sluggish pace - even the action sequences overuse slow motion shots.

Scarlett Johansson does not give a particularly noteworthy performance. She is far more rigid and robotic in her expression than a cyborg with a human brain has any business being. While she delivers well in the capacity of a badass protector, she falls flat in the parts of the film that demand display of emotional conflict and turmoil.

Pilou Asbaek is adequate in his role as her sidekick, but Michael Pitt is a disappointment. He ought to have just kept his hood on and stayed an enigma. Takeshi Kitano and Juliette Binoche surprisingly surpass the main players, pulling off their relatively small parts in a way that is real and full of feeling.

The visuals are undoubtedly the winner of this film, larger than life and wonderfully imagined. It is a terrifying take on the future - a world that is lawless and fast losing touch with humanity under the shiny veneer of holograms, highways in the sky, enhanced bodies and deteriorating minds. Yet the technology is attractive enough to make you wish that the future would indeed look like that (brace yourselves for disappointment - science fiction movies almost never get it right).

The 3D effects are practically non-existent for the most part, but occasionally remind you why you are wearing goggles by jumping out at you as a fiery blast of a splash of water.

Ghost In The Shell is entertaining enough, but if you want a movie that's worth spending a Friday evening on, you would be better off watching the original anime instead.
Share. Save. Connect.
Tweet
GHOST IN THE SHELL SNAPSHOT 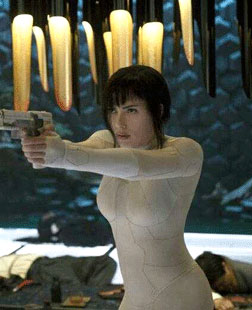 ADVERTISEMENT
This page was tagged for
Ghost In The Shell english movie
Ghost In The Shell reviews
release date
Scarlett Johansson, Pilou Asbaek
theatres list
Follow @fullhyderabad
Follow fullhyd.com on
About Hyderabad
The Hyderabad Community
Improve fullhyd.com
More
Our Other Local Guides
Our other sites
© Copyright 1999-2009 LRR Technologies (Hyderabad), Pvt Ltd. All rights reserved. fullhyd, fullhyderabad, Welcome To The Neighbourhood are trademarks of LRR Technologies (Hyderabad) Pvt Ltd. The textual, graphic, audio and audiovisual material in this site is protected by copyright law. You may not copy, distribute, or use this material except as necessary for your personal, non-commercial use. Any trademarks are the properties of their respective owners. More on Hyderabad, India. Jobs in Hyderabad.