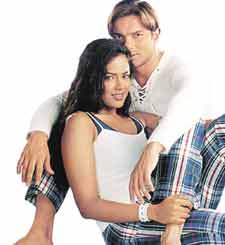 Aryans, love, college security, handsets, green force (cash power), witty death threats, violent henchmen, tussles, handcuffs, greed, double-crossing... whew! There, that was the most meticulously put together, only one of its kind keyword listing of "Maine Dil Tujhko Diya". And nope, 'mushy' certainly isn't included in the list for the reason that there more or less aren't any impressive misty-dreamy-steamy encounters in the film.

"Maine Dil Tujhko Diya" doesn't spend lots of time pondering on question marks about love and passion. Instead, the flick gets right to the point: fall in love with a jumbo-rich girl, and bad things will happen to you. Fortunately, none of those bad things seems to be a match for the machismo of our lead man, Ajay (Sohail). 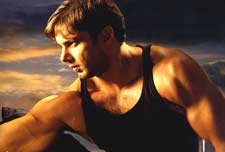 Aryans, reminiscent of the oldest of warrior tribes in India, is a college-security group consisting of five best friends, who deem themselves to be the modern-day counterparts of the ancient Aryan warrior tribe (I never thought that the ancient tribe was so undersized!). Sohail, the lynchpin of Aryans, falls head over heels for a tubby beauty Aisha (Sameera), daughter of a filthy-rich father, Varma Saheb (Kabir Bedi). In less than two shakes of a lamb's tail, a friend of Varma Saheb who wants Aisha to be married to his own son calls for the services of one Mr. Bhai (Sanjay Dutt), to butcher Ajay. 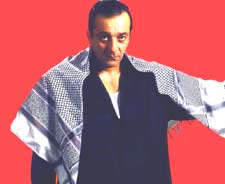 Just when Bhai is about to blow the lights out of Ajay, Ajay utters the turning-point dialogue, "Bhai jaan mein tho aashiq hoon, mein tho sirf ek baar maroonga. Lekin mere pyar ka sachhai jaan ke aap baar baar marenge" Flashback... back to when Bhai has a chota bhai Izaz, who utters the same words before bumping himself off. Then what? Bhai has found a new chota bhai! What more, Bhai even runs the risk of his life to make sure that Ajay marries Aisha... and hurray! It's ta-ta time! 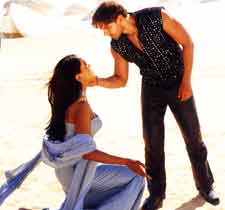 Performance wise, Sohail gives the impression of having lucratively encompassed a queer but passable jumble of traits... the grimness of Arbaaz Khan and a smidgen of the comicalness of Sallu Baba (Salman Khan), which doesn't seem bad making an allowance for this being his debut movie. Now, time for the question of the review... Can you imagine a commonplace walkie-talkie functioning properly in just about everyplace in Mumbai? Nope? But Sohail just did, and I guess that's all I will need to speak about his directorial competence, in his directorial debut. 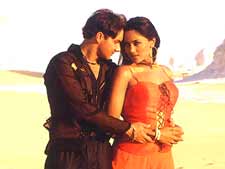 Sameera did just what she in all probability set out to do... add color and breadth to the screen. And luckily for her I don't even get to comment on her non-existent and dismal acting abilities since all that she did was pout in this movie. Kabir Bedi to my amazement seemed unusually calm for the role of a peeved father of the heroine. And Sanju baba did his usual gig by pitching his long hair to and fro, and whacking the stuffing out of every other bad guy. The music and background score rendition by Daabu is the instant ear-candy types, and is just about above average.

ADVERTISEMENT
This page was tagged for
Maine dil tujhako
MaineDiltujhkoDiya
me to aashiq hu dialogue in hindi
ashiq to ek bar marta kis movie ka dilog h
Main to ashiq ho ek baar marunga
Follow @fullhyderabad
Follow fullhyd.com on
About Hyderabad
The Hyderabad Community
Improve fullhyd.com
More
Our Other Local Guides
Our other sites
© Copyright 1999-2009 LRR Technologies (Hyderabad), Pvt Ltd. All rights reserved. fullhyd, fullhyderabad, Welcome To The Neighbourhood are trademarks of LRR Technologies (Hyderabad) Pvt Ltd. The textual, graphic, audio and audiovisual material in this site is protected by copyright law. You may not copy, distribute, or use this material except as necessary for your personal, non-commercial use. Any trademarks are the properties of their respective owners. More on Hyderabad, India. Jobs in Hyderabad.