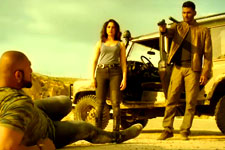 Chaitanya Karthik / fullhyd.com
EDITOR RATING
4.5
Performances
Script
Music/Soundtrack
Visuals
4.0
1.0
6.0
5.0
Suggestions
Can watch again
No
Good for kids
No
Good for dates
No
Wait to rent it
No
The makers of Action had promised that it was going to be a riveting action thriller - and while you are served with a good dose of action in the movie, you are deprived of the riveting aspect of it. Why? Because the makers of Action were so focused on creating over-the-top stunts that they forgot that there is something called the story.

The movie starts with Diya (Tamannaah), an Army officer, getting captured by a group of scary-looking men in Istanbul, who threaten to kill her if she doesn't give them the whereabouts of Subhash (Vishal), also an Army officer and her colleague. It would have been quite plausible for Diya herself to kick the bad guys' butts, but no, the hero has to fly down out of nowhere to save the day. Also, this fight is laced with a couple of incredibly corny punchlines, that pretty much tell you what to expect from this movie.

What follows is a lull that lasts long enough for you to forget that it is an action movie. Subhash's father (Pala Karuppiah) is the Chief Minister of Tamil Nadu, and Subhash's brother (Ramki) is anointed the Deputy Chief Minister. Subhash is also happily in love with Meera (Aishwarya), and they get engaged. All hell breaks loose one day when Subhash loses both his brother and his fiancée in a terror attack. The rest of the story deals with how Subhash finds the people responsible for the deaths and brings them to justice.

The biggest problem with Action is that it claims that its USP is the action but most of the action, if not all of it, has poor impact because of tacky special effects. Action movies work well when the action doesn't feel fake. In Action the stunt choreography is pretty good, and there are a few scenes which give you the adrenaline rush, but the special effects ruin it all. As if that were not enough, the story doesn't really engage you even if you tried your best to be invested. There are plenty of plot twists in the movie, but none that leaves you in awe. In fact, it almost feels like the plot twists were written before the story was.

Indeed, there are so many logical loopholes in the movie that you can't help but wonder about the director's attention span. For instance, in one scene Subhash is seen taking the help of a hacker to trace the location of an assassin, and in another he himself is hacking into the system of a highly secured bank - which is also a sequence that basically mocks your IQ. Also, Subhash has the power to disappear at will. You will have to watch Action to fully appreciate what we are saying.

The actors do the best they can with what they have been given. Vishal is fine. Tamannaah and the rest of the female characters haven't been given much scope to performm and just contribute to the glamour quotient. Even in the action sequences, it is just Vishal doing the stunts while Tamannaah just exists in the vicinity.

Hiphop Tamizha deserves a special mention for the work he has done in this one - his music elevates a below average movie to a mediocre, tolerable one. The movie is shot in exotic locations and is mostly easy on the eyes, but that that fails to salvage things because of the wafer-thin storyline.

Action's idea may have been good to begin with, but a sub-par plot and action sequences that stand out for how artificial they look ensure that you don't enjoy the movie. You may still find it a "timepass" movie, but you need to have special training for that.
Share. Save. Connect.
Tweet
ACTION (TAMIL) SNAPSHOT 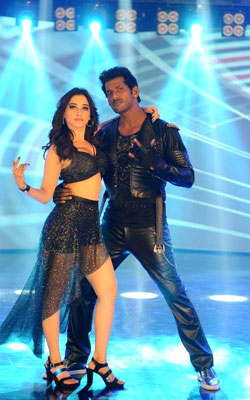 ADVERTISEMENT
This page was tagged for
Action (Tamil) tamil movie
Action (Tamil) reviews
release date
Vishal, Tamannaah Bhatia
theatres list
Follow @fullhyderabad
Follow fullhyd.com on
About Hyderabad
The Hyderabad Community
Improve fullhyd.com
More
Our Other Local Guides
Our other sites
© Copyright 1999-2009 LRR Technologies (Hyderabad), Pvt Ltd. All rights reserved. fullhyd, fullhyderabad, Welcome To The Neighbourhood are trademarks of LRR Technologies (Hyderabad) Pvt Ltd. The textual, graphic, audio and audiovisual material in this site is protected by copyright law. You may not copy, distribute, or use this material except as necessary for your personal, non-commercial use. Any trademarks are the properties of their respective owners. More on Hyderabad, India. Jobs in Hyderabad.