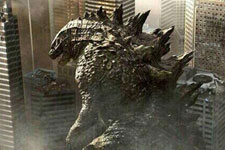 Kritika Deval / fullhyd.com
EDITOR RATING
5.5
Performances
Script
Music/Soundtrack
Visuals
3.5
5.0
8.0
5.5
Suggestions
Can watch again
No
Good for kids
Yes
Good for dates
No
Wait to rent it
No
There's something to be said about that specific genre of cinema that is reserved for giant creatures fighting other giant creatures. They don't let trivial things like lives, geography or logic come in the way of the important stuff - attacking each other and smashing buildings.

Take Godzilla, for instance. Japan's love-hate relationship with the monster aside, in this film, he is pegged as the savior against two bug things which live on radiation and want to mate. Well, one bug thing lives in Tokyo where Joe Brody (Bryan Cranston) is looking for answers to what caused the nuclear meltdown that killed his wife a coupla decades ago. The other bug thing lives in San Francisco where Brody's son Ford Brody (Aaron Taylor-Johnson) lives with his wife Elle (Elizabeth Olsen) and son Sam (Carson Bolde).

So, anyway, Joe gets caught trespassing the "quarantined" area that is his former home, so the cops call Ford to come and bail his old man out. Ford goes to the now shutdown reactor which has been turned over to scientists studying the MUTO (Massive Unidentified Terrestrial Organism), aka bug thing, that is slowly being gestated to life by the nuclear-powered earth.

Just when dad and son are in the middle of demanding to be let off, stuff happens - electricity flickers a lot, something breaks, slime falls on someone, a monster breaks free, and within 5 minutes Walter White, we mean, Bryan Cranston, is dead.

The military has a plan. Call Godzilla, get the two MUTO - one in Tokyo and the other in San Francisco - together, get all three fighting, and then nuke them all. Dr. Ichiro Serizawa (Ken Watanabe) has other plans, though. "Let them fight," he says inscrutably, all the while mumbling about the natural order etc. etc.

The monsters are quite gloriously ugly, exactly how monsters older than prehistory spawned from the Earth's radioactive bowels should look. Godzilla is his most resplendent yet, and the MUTO even move wonderfully.

But then, there are the people. Dr. Serizawa had the right idea about letting the creatures fight, an idea the makers should've borrowed by not putting any people in the film. Not a single human character in the movie is useful in any way, with Ford Brody's character going so far as to distract us from the main plot.

The performances by everyone are good, but as we just mentioned, really superfluous. The graphics beat the screenplay by a mile, while the background track matches the action on screen beat for beat.

All in all, you will enjoy this one if you aren't expecting a story, or anything even approaching coherence. If you lockdown firmly all your brain's attempts at logicking, then the monsters will leave you with a spectacle you will treasure for a long, long time.
Share. Save. Connect.
Tweet
GODZILLA (3D) TELUGU SNAPSHOT

ADVERTISEMENT
This page was tagged for
master gargila telugu movie
godzilla 1998 movie in telugu
master godzilla movie telugu lo
godzilla 1998 movie telugu
Godzilla (3D) Telugu telugu movie
Follow @fullhyderabad
Follow fullhyd.com on
About Hyderabad
The Hyderabad Community
Improve fullhyd.com
More
Our Other Local Guides
Our other sites
© Copyright 1999-2009 LRR Technologies (Hyderabad), Pvt Ltd. All rights reserved. fullhyd, fullhyderabad, Welcome To The Neighbourhood are trademarks of LRR Technologies (Hyderabad) Pvt Ltd. The textual, graphic, audio and audiovisual material in this site is protected by copyright law. You may not copy, distribute, or use this material except as necessary for your personal, non-commercial use. Any trademarks are the properties of their respective owners. More on Hyderabad, India. Jobs in Hyderabad.