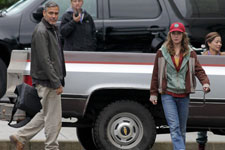 Nupur Barua / fullhyd.com
EDITOR RATING
6.0
Performances
Script
Music/Soundtrack
Visuals
7.0
6.0
6.0
8.0
Suggestions
Can watch again
Yes
Good for kids
Yes
Good for dates
Yes
Wait to rent it
No
In Walt Disney's words, the idea of a Tomorrowland is "a step into the future, with predictions of constructed things to come". At least five Disneyworld parks across the world each have a "Tomorrowland", which was first conceptualised in the 1950s. Walt Disney had his own vision of Utopia, and developed the idea of the Experimental Prototype Community of Tomorrow (EPCOT). Director Brad Bird, in this George Clooney starrer, has taken this concept to another dimension, literally, but it is obvious that he has been heavily influenced by Walt Disney's intense, if somewhat naïve, thoughts on what and how the future should be.

The movie begins with Frank Walker (George Clooney), a has-been inventor, telling us the future was not always going to be so depressing. When he was a boy (Thomas Robinson), he attended the World Fair in New York, in 1964. He had a rough, hand-made jet pack that he wanted to showcase in a competition, but the organiser, David Nix (Hugh Laurie), had told him that it was not good enough. A rather intriguing young girl, Athena (Raffey Cassidy), saw his potential and gave him a pin that gave him access to another world below the park. A futuristic park with wondrous technological marvel, such as a flying monorail. This was his world for a while.

In present day America, teenager Casey Newton (Britt Robertson) is determined to hinder the inevitable termination of the local NASA platform, because she wants her father Eddie Newton (Tim McGraw), a NASA engineer, to retain his job. She sneaks out often at night, and her younger brother Nate (Pierce Gagnon) covers for her. Casey is caught by the authorities one day, and locked up overnight. When she collects her belongings the next day, she finds a strange pin in the pile. When she touches it, she is immediately transported to a strange world. Unable to understand what it means, and after a few accidents, she eventually reaches that world, and sees what the future can be. Her pin runs out of juice, though, and she does not know what to do next.

A series of incidents leads her to Texas, in search of answers. She soon learns that she cannot trust people, and is rescued by Athena, who drops her off at Frank Walker's doorstep. Frank, like Athena, was kicked out of Tomorrowland a few years ago, and he is unwilling to entertain the teenager. They unite only when they realise that they are both in danger.

Frank realises that Casey is no ordinary girl, and, in fact, may be able to prevent the eventual apocalypse that the world will be faced with in less than two months. However, they need to go to Tomorrowland, and that requires a portal. Besides, David Nix is still the head of that world, and he may just be a megalomaniac who wants to control the way the earth runs.

Tomorrowland is no ordinary Disney movie, and there are no princesses and fairies, or even a Prince Charming. Unlike the saccharine sweet storylines of most Disney movies, Tomorrowland is gritty and not so pleasant. Surprisingly, the protagonist even curses. Casey is not a rebel. Far from it, in fact, but she is extremely bright. Much to Frank's surprise, she worships her father. Frank is sometimes irritated with her easily impressionable mind. Disney has finally given us a heroine who is not cloyingly innocent or pretty, or over-confident - a character that a young girl can relate to.

Most of the plot is too complicated for young minds, and for a Disney movie. You have time travel, alternate history, and plenty of science. It becomes difficult to keep up with the sequence of events at intervals, since the movie does not dumb it down for the audience. You are supposed to know all about futuristic Utopias and the concept of travelling to another dimension through portals.

Also, after the intermission, the screenplay stagnates and becomes dull. The cardboard villains are not menacing at all, and all the laser guns hardly seem deadly. Once Casey gets to where she has to be, the action becomes anti-climactic. The problem, once revealed, is rather inane, and everything else after that becomes a blur, because, again, it is impossible to keep up with what each character is supposed to be doing. The dialogues do not help much, and the humour disappears. The first half, however, is a rollercoaster ride. And, like all Disney movies, this one, too, has a happy ending (hardly a spoiler), but it is all rather ambiguous.

The film does have a shade of preaching. It reiterates the fact that the world is headed towards annihilation. However, it also emphasises on the importance of being active critics and decision makers, and not passive whiners. Casey is an optimistic young girl, who believes that every individual can make a difference. She is the good guy. The bad guy is Nix, who is pessimistic and convinced that there is nothing anybody can do to save Earth. This conflict lies at the heart of the story, and there is a lesson for youngsters to become more aware of their own potential as they try to solve the problems that the world is facing.

Britt Anderson and Raffey Cassidy both outshine George Clooney in the movie. The young girls are talented, and very confident with their depictions of their characters. They also indulge in some heavy duty action, managing to outwit the bad guys. Clooney looks slightly lost, and maybe even upset that the limelight is not on him. He does his best to be the avuncular mentor to Britt Anderson's character, but she is too spunky for him. Tim McGraw is definitely lost in the movie. Hugh Laurie holds his own, and he deserved more screen time. Pierce Gagnon is a delight to watch, and you wish he had more to do.

The production design, a representation of Walt Disney's imagination, does not stray too far from the great man's vision. The actual Tomorrowland had the first operational monorail in the US, for example, and the flying version in the movie has been created with much love and respect, as a tribute. The people of Tomorrowland, their costumes and the buildings and flying vehicles, transport you to another world. You understand immediately why both young Frank and teenage Casey are fascinated by it, and why Nix wants to keep it a secret.

The cinematography is commendable in the CGI world, and in the action sequences of the movie. The music is decent, but the editing could have done with some cuts towards the end, especially during the monologues.

Tomorrowland is a movie for all ages, and even if you become impatient towards the end, it is worth a watch. Take your kids and your friends along, because despite its length, the film does leave you with some food for thought, and can spark many discussions long after you have left the theatre.
Share. Save. Connect.
Tweet
TOMORROWLAND SNAPSHOT

ADVERTISEMENT
This page was tagged for
Tomorrowland english movie
Tomorrowland reviews
release date
George Clooney, Hugh Laurie
theatres list
Follow @fullhyderabad
Follow fullhyd.com on
About Hyderabad
The Hyderabad Community
Improve fullhyd.com
More
Our Other Local Guides
Our other sites
© Copyright 1999-2009 LRR Technologies (Hyderabad), Pvt Ltd. All rights reserved. fullhyd, fullhyderabad, Welcome To The Neighbourhood are trademarks of LRR Technologies (Hyderabad) Pvt Ltd. The textual, graphic, audio and audiovisual material in this site is protected by copyright law. You may not copy, distribute, or use this material except as necessary for your personal, non-commercial use. Any trademarks are the properties of their respective owners. More on Hyderabad, India. Jobs in Hyderabad.