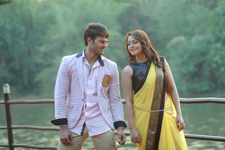 Ravi Kandala / fullhyd.com
EDITOR RATING
3.0
Performances
Script
Music/Soundtrack
Visuals
5.0
3.0
3.0
4.0
Suggestions
Can watch again
No
Good for kids
No
Good for dates
No
Wait for OTT
No
Sequel: a literary work, movie etc. that is complete in itself but continues the narrative of a preceding work. This is a definition that needs to be drilled into all the directors of Tollywood who even intend to make a sequel. Mosagallaki Mosagadu (MM) has been publicized extensively as the sequel of Swami Ra Ra is no sequel. It is absolutely the same plot with a weak narration.

The other thing that Mosagallaki Mosagadu makes you wonder about is whether the directors of today have lost the ability to write a decent romantic track into a movie. How many times will the hero fall in love at first sight and stalk the heroine? How many times will the heroine meet a complete Pappu character, hate him first and subsequently fall in love with the hero for no rhyme or reason whatsoever? And how many songs will the two break into without even a good leading scene? It really seems like the only elements people want to focus on these days are thrills and comedy (read mass-pleasing comedy) - the heroine can flit in and out just before a song and shake some booty during the songs for all they care.

Mosagallaki Mosagadu features a small time crook Krish aka Krishna (Sudheer Babu). Krish falls in love with Janaki (Nandini Rai) and stalks her until she loves him back. In a parallel thread, a good Samaritan (played by Chandramohan) runs a school for orphans and is in danger of losing his school due to debts. And in yet another parallel thread, idols of Lord Sita and Rama are stolen from a temple in Uttar Pradesh.

An international don Rudra (Abhimanyu Singh) wants these idols so he can sell them to a British smuggler. And a local don Kaushik (JP) wants to get those idols and go one up on Rudra. How these threads converge and how our hero emerges the knight in shining armour forms the plot of the film.

Mosagallaki Mosagadu takes off interestingly enough, but hits the brakes hard because of the desire to project Sudheer Babu as a superhero. It then derails further due to a completely insipid love story. And then it stays firmly off track because of comedy sequences that just fail to make you laugh. The new director Bose, who picks up a decent plot thread, does not manage to weave an engaging yarn. The final plot twist that yearns to project our swindler hero as a good man rings false and proves completely unnecessary.

Acting-wise, Sudheer Babu improves upon his previous performances, and is passable. Nandini Rai has one expression throughout, and appears perfectly coiffured in every scene. JP gets a lengthy role and does well. The others go through the motions.

Technically, the film is mediocre. The songs are ho-hum, the cinematography is decent and the thrills are fine.

Mosagallaku Mosagadu's posters suggest that you do not miss the beginning. We'd go one step ahead - miss the entire movie!
Share. Save. Connect.
Tweet
MOSAGALLAKU MOSAGADU (2015) SNAPSHOT 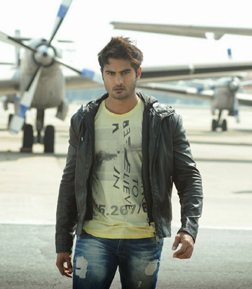 ADVERTISEMENT
This page was tagged for
mosagallaku mosagadu songs download 2015
mosagallaku mosagadu new songs 2015
Mosagallaku Mosagadu (2015) telugu movie
Mosagallaku Mosagadu (2015) reviews
release date
Follow @fullhyderabad
Follow fullhyd.com on
About Hyderabad
The Hyderabad Community
Improve fullhyd.com
More
Our Other Local Guides
Our other sites
© Copyright 1999-2009 LRR Technologies (Hyderabad), Pvt Ltd. All rights reserved. fullhyd, fullhyderabad, Welcome To The Neighbourhood are trademarks of LRR Technologies (Hyderabad) Pvt Ltd. The textual, graphic, audio and audiovisual material in this site is protected by copyright law. You may not copy, distribute, or use this material except as necessary for your personal, non-commercial use. Any trademarks are the properties of their respective owners. More on Hyderabad, India. Jobs in Hyderabad.