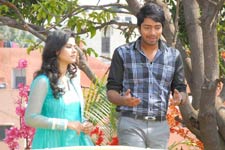 Deepa Garimella / fullhyd.com
EDITOR RATING
5.0
Performances
Script
Music/Soundtrack
Visuals
7.0
4.0
6.0
4.0
Suggestions
Can watch again
No
Good for kids
No
Good for dates
NA
Wait to rent it
Yes
You can't expect a film to be a side-splitting joyride just because it has Allari Naresh in it. It's unfair to expect him to think up gags as you shoot the film. You have to make him do and say funny things. And, note: "funny" has to mean "funny for everyone".

You'd think Devi Prasad, the person who made Blade Babji with the lanky comic star, would know. But Kevvu Keka, his latest creation, seems to have been made without a joke-writer on board. There's a story - quite an intricate one at that - and quite a lot of good actors, but the film somehow doesn't quite reach its potential.

Buchi Raju (Allari Naresh) checks into a hotel room to commit suicide. He somehow botches up his own suicide attempt, and lands in hospital. He then explains to his uncle (Krishna Bhagawan) why he had wanted to kill himself.

Then ensues a love story, which also features the imbecilic father (M S Narayana) of the girlfriend, a debt of Rs. 30 lakh, a monumental misunderstanding, and general unrest. The summary is that Buchi Raju had tried to end his life because he didn't have enough money to please his prospective father-in-law.

But flashbacks have flashbacks, and Buchi Raju, it turns out, has to avenge something that happened to his family. The scene shifts to Bangkok (where apparently the population is composed of mostly good ol' Telugus, with a complete set of buffoons, villains and vamps). Here, Ashish Vidyarthi plays a businessman who is hated by every single person who knows him. Lots of misadventures follow, and in the end, everyone apologizes to everyone else. Except to us.

Kevvu Keka has a story that could have worked if left to brew a little longer. A confusion caper like this also tends to overwhelm you with its multiple set-ups and rigs, but a continuous stream of clever dialogues could have prevented audiences from getting antsy.

But the jokes are weak, the film lacks energy, and the genuinely funny bits are too few and far apart. Also, the movie just doesn't seem to end beyond a point.

Allari Naresh is his usual self. This is a role he could easily sleepwalk through. The heroine is pretty nice, but has lousy lip sync.

Krishna Bhagawan is seen on screen after ages, and it is good to see him back. Ashish Vidyarthi and M S Narayana are other major characters. The rest of the cast is pretty good. Kiran Rathod stands out for her stunning clothes. Ali is under-utilized, though.

But the visuals are inelegant. Scenes start with sign boards of the Radisson and Cafe Coffee Day, and then shift to semi-dingy interiors. Every frame practically screams "low budget". The songs are surprisingly trendily composed and shot. Mumaith Khan's item song livens things up a little bit.

In all, Kevvu Keka is a slow movie that isn't quite as funny as your neighbour tripping over a banana peel. In fact, it leaves you yawning long after it is over. Watch it if your entire list of criteria reads: "any Allari Naresh film".
Share. Save. Connect.
Tweet
KEVVU KEKA SNAPSHOT 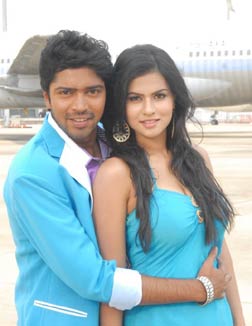 ADVERTISEMENT
This page was tagged for
Kevvu Keka telugu movie
Kevvu Keka reviews
release date
Allari Naresh, Sharmiela Mandre
theatres list
Follow @fullhyderabad
Follow fullhyd.com on
About Hyderabad
The Hyderabad Community
Improve fullhyd.com
More
Our Other Local Guides
Our other sites
© Copyright 1999-2009 LRR Technologies (Hyderabad), Pvt Ltd. All rights reserved. fullhyd, fullhyderabad, Welcome To The Neighbourhood are trademarks of LRR Technologies (Hyderabad) Pvt Ltd. The textual, graphic, audio and audiovisual material in this site is protected by copyright law. You may not copy, distribute, or use this material except as necessary for your personal, non-commercial use. Any trademarks are the properties of their respective owners. More on Hyderabad, India. Jobs in Hyderabad.