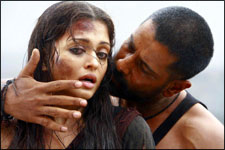 Deepa Garimella / fullhyd.com
EDITOR RATING
6.0
Performances
Script
Music/Soundtrack
Visuals
9.0
4.0
9.0
9.0
Suggestions
Can watch again
No
Good for kids
No
Good for dates
Yes
Wait for OTT
No
So, is Villain indeed an exploration of the Ram-Ravan face-off (which is one of Indian mythology's least ambiguous conflicts between good and evil)? And is the flick indeed as complex as it has been touted to be? Has Mani Ratnam chosen the wrong side of Gyaneshwari Express and Dantewada to try and draw sympathy towards an increasingly tiresome issue?

Yes, no and maybe.

However, the thing about a Mani Ratnam movie is that whatever else is happening to the story, it is hard to take your eyes off the poetry unravelling on screen. So even if several parts of Villain's conceptualizations are as forcibly quaint as Shilparamam's thatch huts and "villager" mannequins, there is little doubt that the sheer skill on display distracts you from some of the film's flaws.

The sweat and grime behind the scenes is more than apparent. Heart-stopping visuals, heart-stopping Aishwarya Rai, spectacular performances all round, Rahman's romancing of sound and tune. Plus, the fact that this one has been shot in two languages, that means that quite a few on the crew - including the leading lady - has had to do things twice over. Indeed, Villain is a piece of exotica in many ways.

And that is just the point - this mostly remains a piece of exotica. With a few film-festival baits thrown here and there - for example, the absolutely random ending - Villain is not looking at seducing people who want to let their hair down and have some fun.

The story is set in the Nallamalla forests, and is a simplistic by-the-numbers plugging in of key Ramayana characters and episodes into a police-Naxalite/Maoist battle. A "revolutionary" called Veeraiah (Vikram) abducts the wife Ragini (Aishwarya Rai) of the newly-appointed SP Dev (Prithviraj). Veeraiah is revered among the tribals of the forest, and his word is the law of the land there. A forest guard (Karthik) - who literally monkeys around on trees - helps Dev and Ragini re-unite.

To the film's credit, Villain has some well-sketched characters. Both Veeraiah and Ragini have impressive character journeys, and their chemistry is pretty captivating.

However, there's a strange mix of filmi-melodrama and artsy-theatrics built into a plot that you'd expect to be a little more realistic. Firstly, thanks to Veeraiah's eccentric nature and Ragini's defiance, a lot of the dialogue - that in the first place consists of sentences far from colloquial - is recited and not spoken. There are folk dances and wedding dances that don't seem natural at all. Also, there are a few scenes of excessive violence - suggested, and not explicit, but violent all the same.

The performances are meticulous as expected. However, it's the dubbing that will likely let the experience down for Telugu audiences, thanks to the essence of the flick being lost in translation.

Vikram is intriguing to watch, Aishwarya Rai has come of age as an actress, and Prithviraj is impressive in the rather short role as the SP. And possibly to make up for all the mud and dirt all over Rai, she has a song all to herself, with plenty of her classical dance skills on show.

Priyamani has a criminally small role as Veeraiah's sister, but she's a familiar face to audiences here and draws cheers. Prabhu and Karthik are a few other notable names.

Rahman's soundtrack isn't impressive as a stand-alone unit, but set against the movie, it makes for a powerful combination. Stunningly shot locales add to the combination, making Villain a surreal experience sometimes.

On the whole, you could watch Villain if you set a few expectations right.

See Villain (Telugu) full details
VILLAIN (TELUGU) USER REVIEWS
1 - 2 OF 2 COMMENTS
POSITIVE  |  NEGATIVE |  NEWEST  |  OLDEST  |  MOST HELPFUL  |  LEAST HELPFUL
USER RATING
4.7
3 USERS
Performances
Script
Music/Soundtrack
Visuals
6.0
5.7
5.3
6.7
Can watch again - No
Good for kids - No
Good for dates - No
Wait for OTT - Yes
Krishna on 29th Jun 2010, 9:15am | Permalink
15 mins into this one and boredom starts seeping through your veins. Music is the biggest let down. Though I can see it matches the mood of the film perfectly, this must be ARR’s least impressive composition in some time. I wanted to see this in Hindi as well to compare but don’t think I’ll be able to sit through it considering the jury’s out that Vikram’s out performed Abi.

RATING
3
bujjivalli on 18th Jun 2010, 10:04pm | Permalink
nice cinematography by santosh shivan. Music by ARR is not that much good. Vikram n Aish performances are nice. Totally we can watch it once!

ADVERTISEMENT
This page was tagged for
villain telugu movie rulz
villain telugu movie download in movierulz
2 movie rulz villain
vikram villain movie download movierulz
villain movie in telugu movierulz.in
Follow @fullhyderabad
Follow fullhyd.com on
About Hyderabad
The Hyderabad Community
Improve fullhyd.com
More
Our Other Local Guides
Our other sites
© Copyright 1999-2009 LRR Technologies (Hyderabad), Pvt Ltd. All rights reserved. fullhyd, fullhyderabad, Welcome To The Neighbourhood are trademarks of LRR Technologies (Hyderabad) Pvt Ltd. The textual, graphic, audio and audiovisual material in this site is protected by copyright law. You may not copy, distribute, or use this material except as necessary for your personal, non-commercial use. Any trademarks are the properties of their respective owners. More on Hyderabad, India. Jobs in Hyderabad.