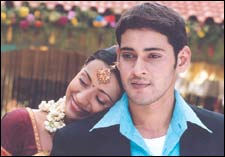 Priyanka Pulla / fullhyd.com
EDITOR RATING
7.0
Performances
Script
Music/Soundtrack
Visuals
NA
NA
NA
NA
Suggestions
Can watch again
NA
Good for kids
NA
Good for dates
NA
Wait for OTT
NA
Athadu borrows a whole lot from the entire glut of great Western action movies. There is the stylized action of the 1990s muscle-man trio (Arnie/Stallone/Willis). The Patrick Roberts open-palmed running scene of Terminator 2 (down to the clinically piercing eyes). The dispassionate look with the hint of inner calculation on Stallone in Assassins. And of course, the ubiquitous time-slicing, panoramic photography and bullet-time, to finish the seasoning for the exact effect.

But guess what? With all that borrowing and inspiration, Athadu manages to make one of the higher decibel bangs this year. To say it will steal the show for weeks to come might not be too much off the mark.

The story takes the scenic route home. Killer Nandagopal (Mahesh Babu) stops by at the home of trusting belle Puri (Trisha) and seeks refuge, but in disguise. Family buys story, trusts, and pours its affection on him. Killer becomes baked Alaska - half warm-and-melty with the love, and half still cold-and-calculating. Police catch up, and movie makes an unbearable ankle-spraining twist to cleverly punish the 'real' culprit, extradite the killer, bring lovers together and settle down the family.

The movie does not pause a second to fill up the ridiculous loopholes in the plot, although it very easily could have. Like how Nandu is left free in the end despite being identified as a professional killer, and why the hell he puts his 1 crore in a bank when that's the first place the police would look. And why the police don't look there until another criminal tells them that they usually put their money there because the police won't look there. It's a little giddy, and that's probably what the plot counts on to slip by.

But all the giddiness in the plot doesn't dampen the big bang. The dialogues and screenplay are so taut, you are straining to catch every word in anticipation. There are some brilliant lines that will stick on for ages, and Mahesh delivers them with a Bachchan-like naturalness. His jug-handle-eared and pouty-lipped look makes him one of the more lovable professional killers who have been on screen. But he manages to create a persona that is real fun to watch.

The hip-swaying title song Athade is groovy and grim, just like the character it is played for. It makes for a good coronal outline to the scenes of Mahesh walking with his swaggering sass, wielding his gun with a flourish.

Puri (Trisha) plays a slightly comical role as a girl who is thrashing around to get Nandu's attention. Nandu, who is in the family as Parthu, their accidentally killed son he is impersonating, responds to her with brashness to conceal his reticence. And that makes for some really hilarious scenes that splice rather well with the action.

On the whole, all the ticket-stub flinging and loud cheering that marks the first day first show of any much-awaited movie casting a crowd-pleaser like Mahesh, builds an anticipation that is met impeccably well. To rate the movie won't make too much sense because the movie will sell itself very well, no matter what. Borrowing or no borrowing, plot or no plot, Athadu is definitely a winner.
Share. Save. Connect.
Tweet
ATHADU SNAPSHOT

Dude(s), almost every Telugu movie I have (been forced to) watch (in APSRTC's Garuda busses) has Prakash Rai as the villian.

Notice the spelling? 'Rai' not 'Raj'. Damn it dude, when you can get former Miss Aishwarya Rai's name correct, why not get this give this excellent actor some credit by referring to his real name.

I want to see the movie

ADVERTISEMENT
This page was tagged for
athadu full movie telugu
athadu movie review
mahesh babu,tum ko, na bhul paege copy of tamil
Athadu telugu movie
Athadu reviews
Follow @fullhyderabad
Follow fullhyd.com on
About Hyderabad
The Hyderabad Community
Improve fullhyd.com
More
Our Other Local Guides
Our other sites
© Copyright 1999-2009 LRR Technologies (Hyderabad), Pvt Ltd. All rights reserved. fullhyd, fullhyderabad, Welcome To The Neighbourhood are trademarks of LRR Technologies (Hyderabad) Pvt Ltd. The textual, graphic, audio and audiovisual material in this site is protected by copyright law. You may not copy, distribute, or use this material except as necessary for your personal, non-commercial use. Any trademarks are the properties of their respective owners. More on Hyderabad, India. Jobs in Hyderabad.