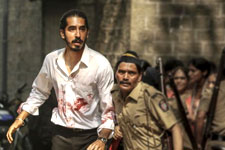 Punarvasu Pendse / fullhyd.com
EDITOR RATING
7.0
Performances
Script
Music/Soundtrack
Visuals
7.0
7.0
6.0
7.0
Suggestions
Can watch again
No
Good for kids
No
Good for dates
No
Wait to rent it
No
Every time Hollywood picks up a project that features India (or any other developing country, for that matter), we are wary about the film being holier-than-thou, or worse, exploitative. Hotel Mumbai is thankfully none of that for the most part - thank you very much.

Director Anthony Maras' debut film is very particular about the small things, such as the smallest aspects of staff etiquette in a hotel like the Taj that are captured in minute detail. Hotel Mumbai is based on the documentary Surviving Mumbai, but Maras skillfully manages to weave together a narrative based on real characters and featuring fictionalised versions of real characters (the makers had access to original conversations between staff and the police rescue team).

We know this story. We have seen how it ends. Hardly anyone in this country will forget the events of 26/11/2008 - the nation experienced the horror first-hand, together. But at fullhyd.com we give a brief summary of every film we talk about, so we sigh and talk about this one as well. Ten armed terrorists from Pakistani outfit Lashkar-e-Taiba infiltrated the city of Mumbai and opened fire indiscriminately, killing over 150 people and wounding a further 300. Multiple places in the city were targeted, including Chhatrapati Shivaji Terminus and Leopold Café, but it was the Taj Hotel that endured a long, harrowing siege.

Hotel Mumbai is a story of the journey of guests and staff that were trapped in the iconic luxury hotel on that fateful night. It is the story of a young Sikh waiter at the Taj Mahal Palace Hotel called Arjun (Dev Patel), who works under the head chef Hemant Oberoi (Anupam Kher); and it is also the story of a Muslim heiress Zahra (Nazanin Boniadi), her American husband David (Armie Hammer), their nanny Sally (Tilda Cobham-Hervey), and the eccentric Russian Vasili (Jason Isaacs). The hotel's motto "Atithi Devo Bhava" (guest is God) is remarkably upheld by Oberoi's staff, as they help hundreds of guests escape the under-fire hotel.

Hotel Mumbai tries its very best to be sensitive to the topic at hand, and this is evidenced by how much time it took for the film to release in India (it was released in most parts of the world last year). Or it could be to cash in on the anniversary of the tragedy, if we're being cynical. Either way, it still feels a little raw, a little too early to dramatise the Mumbai attacks.

Humanising the terrorists adds to this feeling of discomfort, and is sure to ruffle some feathers in India. We see the terrorists being called "kids" by a police officer, and we also see one moment of light banter between two of them. But we also see the extent of brainwashing first-hand, as their unseen handler in Pakistan issues horrific orders like "lob a grenade", and the agents comply as casually as they would had they been asked to pass the salt. Ultimately, though, it is a different portrayal from the pure evil persona that Indian media had adopted to showcase them - and that has its merits and its demerits.

The movie also squarely focuses on the narrative - Kasab is mentioned just briefly here. The Indian police are depicted as the brave people they were, but it also shows how the country was unequipped to deal with an attack of this magnitude - it took hours for special forces to arrive from Delhi. The courage shown in this movie is primarily that of the staff of the Taj Hotel, as evidenced by the one dramatic scene where Oberoi gives any staff that wants to leave the hotel the choice to do so - and most of them choose to help the guests at the potential cost of their own lives.

We admired the makers' choice of sticking to the actual languages used. English is strictly used only when needed - in dialogues between the guests themselves, or in those between the guests and the staff. The terrorists speak in Urdu and Punjabi, the staff use Hindi, and the cops bark orders in Marathi. This makes the film much more watchable for the Indian audiences, and lends an aura of authenticity to it.

Dev Patel is the star of the show, even though his accent is a little off-putting. He seems to be a staple of any film set in India, but we are not complaining. Anupam Kher gets carried away somewhat, and his lines are a lot more dramatic than those of the rest of the cast (he is never annoying, though - just a bit "filmy").

Nazanin Boniadi adeptly shows quiet resilience in the face of danger, and one scene where she has a gun to her head yet defiantly looks at her assailant while chanting a prayer is harrowing. Armie Hammer looks self-assured yet has nothing to do, and Jason Isaacs is the quintessential "dirty" Russian.

Tilda Cobham-Hervey, as the nanny, is shown mostly to be in tears, but her scenes with the baby add a lot of suspense to the drama.

All things considered, though, Hotel Mumbai is a haunting reminder of what the city endured. It doesn't exploit or cheapen the suffering that hundreds of people went through, and is a tribute to not just those who gave their lives on that day but also to those who endured. The question here is, despite the fantastic filmmaking, is it too soon?
Share. Save. Connect.
Tweet
HOTEL MUMBAI (HINDI) SNAPSHOT 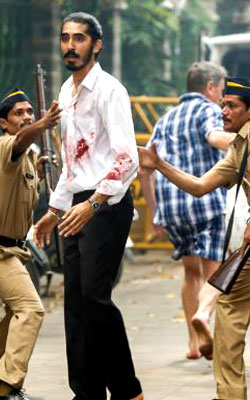 ADVERTISEMENT
This page was tagged for
Pagalpanti full moovie download
hindi moovie hotel mumbai
Hotel Mumbai movie in hindi
Hinde muvie for Hotel Mumbai form download
hotel mumbai movie download hindi
Follow @fullhyderabad
Follow fullhyd.com on
About Hyderabad
The Hyderabad Community
Improve fullhyd.com
More
Our Other Local Guides
Our other sites
© Copyright 1999-2009 LRR Technologies (Hyderabad), Pvt Ltd. All rights reserved. fullhyd, fullhyderabad, Welcome To The Neighbourhood are trademarks of LRR Technologies (Hyderabad) Pvt Ltd. The textual, graphic, audio and audiovisual material in this site is protected by copyright law. You may not copy, distribute, or use this material except as necessary for your personal, non-commercial use. Any trademarks are the properties of their respective owners. More on Hyderabad, India. Jobs in Hyderabad.