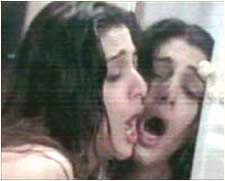 Ajay Bhashyam / fullhyd.com
EDITOR RATING
5.0
Performances
Script
Music/Soundtrack
Visuals
NA
NA
NA
NA
Suggestions
Can watch again
NA
Good for kids
NA
Good for dates
NA
Wait for OTT
NA
No better way to pull the crowds than saying 'Sexual Violence' in red on the poster, eh, Mr. Dhanoa? Mr. Dhanoa is apparently going blue in the face insisting that Hawa is not inspired by the Hollywood thriller The Entity. Then I would seriously recommend contacting the makers of that film at the earliest, man, 'cos you guys are flippin' soulmates! Especially the writers... man, to have the same idea and even the same screen shots from across seas and continents and mountains and all that... I mean, like, wow! I also heard someone gave one Mr. Anu Malik a lifetime achievement award for originality. C'mon dude, the least you can do is have the moral integrity to admit to pinching a story, or being 'inspired' by it.

Hawa is the story of Sanjana (Tabu) and her family. She moves to Manali with her two small daughters and her brother Vicky. As is to be expected, weird stuff starts happening almost right away. An old local woman comes to Sanjana's curio shop and gives her a charm bracelet to keep, but she sells it off.

At home, the dog Tramp (not inspired by The Lady and the Tramp, of course!) starts acting up, runs away, gets possessed... your basic horror prelude stuff. One night, Sanjana is violently raped by a person she does not, or rather can not, see. She is understandably freaked out and runs to a friend's house with family in tow. The suspense (or anticipation for some) of when she will be attacked next drags the film to the interval after an episode of her car going crazy and homicidal.

After dragging yourself back because you shelled out a fair bit for your painful, pan-stained corner seat, but mainly because the TV trailers have told you the best is yet to come, you are introduced to Dr. Asif Ali (Shahbaaz Khan). Sanjana finally decides to consult him, and the psychiatrist puts ideas into her head of childhood trauma, repressed desires and the like. She passes on the Freud recap and this is followed by two really bold scenes.

Here is where the film deteriorates into a C-grade horror film. There's an exorcist, a good versus evil thingie and even a zero-gravity session. The new exorcist/'doctor' tells Sanjana that she will have to fight the ghost on her own, and she says 'Aakhri saans tak ladungi, doctor'. When I heard that, I knew it was all over and any attempt to rise to meaningful cinema from there would be useless. You have some graphics depicting the baaaad ghost (again, not inspired by Iron Maiden's Eddie the Head!) and that's about it, really.

Hawa was apparently shot in a month, and it shows. Someone must've fallen sick and the film was probably completed by the spot boys or light boys who just came back from the night show of Maut Ka Khel or Khoon Kharaaba or some such trash. The climax negates a very good performance by Tabu, who deserved a stronger handling of the script.

The Saikumar of Hindi films, at least in dialogue delivery, Shahbaaz Khan is decent in his short role. The background music director Surendra Modi has done a good job as well, but he needn't have bothered because the audience provided their own sound effects for most of the film. Some of them were quite funny, actually!

ADVERTISEMENT
This page was tagged for
??? ????? ????? ?? ??????
hawa movie in hindi
movie hawa 2003
??? ???? ??? ??????
Hawa movie full story
Follow @fullhyderabad
Follow fullhyd.com on
About Hyderabad
The Hyderabad Community
Improve fullhyd.com
More
Our Other Local Guides
Our other sites
© Copyright 1999-2009 LRR Technologies (Hyderabad), Pvt Ltd. All rights reserved. fullhyd, fullhyderabad, Welcome To The Neighbourhood are trademarks of LRR Technologies (Hyderabad) Pvt Ltd. The textual, graphic, audio and audiovisual material in this site is protected by copyright law. You may not copy, distribute, or use this material except as necessary for your personal, non-commercial use. Any trademarks are the properties of their respective owners. More on Hyderabad, India. Jobs in Hyderabad.