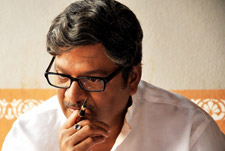 And yes, people lived in a much simpler, gentler, greener time than now.

But debutant director Kranthi Madhav's Onamaalu, a film that tries to speak to 3 generations but may find understanding nods from only one, grieves a little too much over the decay of the past. It is a story whose rightful place is only in a Telugu weekly, where it can command the attention of the audiences it is seeking. As a film - one that is being released for commercial audiences and not for the patient and discerning jury of a film festival - it will be quickly hit by the dynamics of consumer behaviour. In short, the film will not work commercially.

The story is that of a former school teacher Narayana Rao (Rajendra Prasad) wanting to return to his roots, after having lived a monotonous decade or so abroad with his son's family. Narayana Rao longs to come back to his village in India, and after countless pleas to his son (who has neither the time or the inclination to travel to India) to be taken there, he finally breaks free and sets off on his own.

Once in India, Narayana Rao gets chatty with the driver (Raghu Babu) who drives him to his village. He recollects the poetic simplicity of the times, and paints a charming picture of rural life. Thoroughly prepared to get back to the beauty of it all, Narayana Rao is shattered, one inch of his beaming smile at a time, when he sees that the present is a withering shadow of the past. Poverty on one hand, and the changing sensibilities of the urban elite on the other, burst his bubble of idealism, and he decides to do something about it.

Onamaalu is not a movie as much as it is a string of little vignettes - if the first half is about showcasing incidents of goodness in the picture-perfect rural community, the second half is all about how life has "degraded". It's all about painting a picture with individual elements in place, with little emphasis on making this a free-flowing story.

The tone is that of a sad grandparent feeling displaced in the melee of present-day culture. Several issues are sprinkled all over - poverty, the education system, "immorality" of city life, and even farmers. It's a sensitive film, and is rarely wrong perhaps, but the motive seems to be merely to crib about the present and moralize a lot. Narayana Rao's idealism is tragically misplaced, and this is evident in a scene in which he convinces a mineral-water-delivery-boy to shut his business down because it's apparently a sin to sell water in a land blessed with a zillion rivers (or some such thing). While you wonder how Narayana Rao can be so uninformed about scarcity and water pollution, you cannot help feeling sad for the man.

However, for all its faults, the movie is a better piece of work than Devasthanam, because it does have some interesting dialogues, and is generally better made.

Rajendra Prasad revels in roles like these. As you watch Narayana Rao relish the memories of a time gone by, get scandalized by cultural blasphemy, and be saddened by the distress around him, you're glad there's still a niche for actors like Rajendra Prasad. These are roles that demand entire ranges of acting, and Prasad embraces them to the full, theatrics and all.

Kalyani plays a make-up-free role as Narayana Rao's wife. Raghu Babu, Giribabu and Chalapathi Rao play accessories to the protagonist, and most of the other roles are played by new faces.

The visuals are appealing, though not top-notch by any means. And Koti's music is charming, with the songs adding character to the movie.

You may watch Onamaalu if you identify with the theme, and even though the movie may still not be the best in its genre, it is an attempt that deserves to be lauded.
Share. Save. Connect.
Tweet
ONAMALU SNAPSHOT 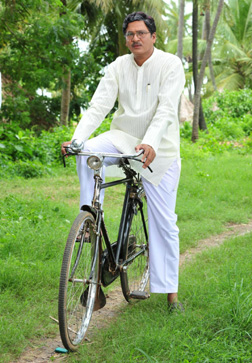 See Onamalu full details
TOP COMMENT
VIJAY NAG on 28th Jul 2012, 12:01pm | Permalink
Hi Deepa, Dont understand ur review….i feel u are really biased to you way of lifestyle and some good morals are not definitely understood by you and are undesired for you...PL DONT FORCE IT ON THE SOCIETY. I HAVE WATCHED THE MOVIE AND NOWHERE the movie is highlighting the cultural scavenging....you should understand our culture and tradition....not completely forget them....then it’s really like forgetting our existence and i think you should recollect your childhood and relate that to your present lifestyle, then you will understand what the film is trying to say and PL DONT DISCOURAGE PEOPLE FROM MAKING THIS KIND OF FILMS WHICH MAY AT LEAST FORCE US TO THINK WHAT IS HAPPENING IN THE PRESENT DAY SCENARIO........I WOULD DEFINITELY RECOMMEND THIS FILM TO AUDIENCES...MUST WATCH...
12
1
USER RATING
9.0
ONAMALU USER REVIEWS
1 - 11 OF 11 COMMENTS
POSITIVE  |  NEGATIVE |  NEWEST  |  OLDEST  |  MOST HELPFUL  |  LEAST HELPFUL
USER RATING
5.3
3 USERS
Performances
Script
Music/Soundtrack
Visuals
NA
NA
NA
NA
Can watch again - NA
Good for kids - NA
Good for dates - NA
Wait to rent it - NA
rajesh on 11th May 2013, 5:38pm | Permalink
i want this movie url plzzzzzzzzzzzzzzzzz
Rafiq warangal on 26th Sep 2012, 9:40am | Permalink
Very nice movie awesome
kekokeka on 4th Sep 2012, 7:43pm | Permalink
Watch Online & Download full Movie of Onamalu On
http://kekokeka.com/movie/telugu/onamalu-watch-online
Anusha on 8th Aug 2012, 8:42pm | Permalink
I watched this movie twice.... superb... Loved it.. They way it taught us how we, the youngsters are moving away from our culture
jinthak on 5th Aug 2012, 8:55pm | Permalink
great movie


Pros: excellent movie
Cons: some people like the review can't understand
deshmukh_sanjay9@yahoo.co.in on 6th Aug 2012, 3:32pm | Permalink
Review : Konchem Atu Itu gaaa Anthee.........
Druva kumar on 3rd Aug 2012, 11:45am | Permalink
i watched 2 times,,rajendraprasad acting is outstanding..nice movie,,,,
vara prasad on 31st Jul 2012, 9:18pm | Permalink
excellent touching and connecting movie.... it makes all to think about their roots from where they rose....as society is learning many bad things from present day serials and movies they can also learn some good things from this kind of movie..it fully deserves state and national award..congrts to kranthi madhav to move on further....
netsatish2 on 29th Jul 2012, 4:47pm | Permalink
very nice movie.
netsatish2 on 29th Jul 2012, 4:53pm | Permalink
Present generation is like that. We need change ourselves.We are not degrading the development but give importance to the culture,people,relationships and our born and grown places. Also our parents. This is a message oriented movie.Everyone should see this movie. There is no castes and rich and poor gap. All people should see. I expect lot of message oriented movies like this. Congrats to Rajendra Prasad sir for his extraordinary acting.
Sekhar varma on 28th Jul 2012, 4:07pm | Permalink
the film too much...director is thinking that change is wrong. but the society changes on its own. even any other foriegn country.. india is still back ward and some upperclass/upper caste people become modern as the dairector said..rest of india and the downtroden people area still in the same backward ness.....this is a upper caste and upper class mithyical movie..........nostalgic movie and a bad presentation...
VIJAY NAG on 28th Jul 2012, 12:01pm | Permalink
Hi Deepa, Dont understand ur review….i feel u are really biased to you way of lifestyle and some good morals are not definitely understood by you and are undesired for you...PL DONT FORCE IT ON THE SOCIETY. I HAVE WATCHED THE MOVIE AND NOWHERE the movie is highlighting the cultural scavenging....you should understand our culture and tradition....not completely forget them....then it’s really like forgetting our existence and i think you should recollect your childhood and relate that to your present lifestyle, then you will understand what the film is trying to say and PL DONT DISCOURAGE PEOPLE FROM MAKING THIS KIND OF FILMS WHICH MAY AT LEAST FORCE US TO THINK WHAT IS HAPPENING IN THE PRESENT DAY SCENARIO........I WOULD DEFINITELY RECOMMEND THIS FILM TO AUDIENCES...MUST WATCH...
RATING
9
SANJAY on 6th Aug 2012, 3:31pm | Permalink
Ante Babai..... Deepa Nee Village Vellamantava... Haaaa.... O Haaaa.....
Sree on 28th Jul 2012, 4:58am | Permalink
COMPLETELY agree with Deepa G's review... couldn't have described it better.
RATING
5
LEAVE A COMMENT
fullhyd.com has 700,000+ monthly visits. Tell Hyderabad what you feel about Onamalu!
MORE MOVIES
Latest Reviews
SR Kalyana Mandapam
Ippudu Kaaka Inkeppudu
Thimmarusu
Kadhanika
Shukra
more
Deyyam - 2021
Tempt Raja
Vakeel Saab
Wild Dog
Sulthan (Telugu)
Sulthan
Rang De (Telugu)
Saina
Aranya
Chaavu Kaburu Challaga
Contemporary Reviews
Ice Age 4: Continental Drift
Jism 2
Mr. 7
Total Recall
Step Up 4: Revolution
more
Krishna Aur Kans
Krishna Aur Kans (3D)
Ice Age 4: Continental Drift...
Kya Super Kool Hain Hum
Oo Kodathara Ulikki Padathar...
Batman 3 - The Dark Knight R...
Batman 3 - The Dark Knight R...
Mere Dost Picture Abhi Baki ...
Batman 3 - The Dark Knight R...
Random Reviews
Shaurya
High Risk
Premasandadi
Ishq Vishq
Van Helsing
more
Jayam
Darling
Gadar
Ride
Alias Janaki
Maleficent (3D)
Hamari Adhuri Kahani
Ameerpeta Lo
October
Raja Vaaru Rani Gaaru
SEARCH MOVIES
Dissatisfied with the results? Report a problem or error, or add a listing.
ADVERTISEMENT
SHOUTBOX!
{{todo.name}}
{{todo.date}}
[
ip{{todo.ip}}
]
{{ todo.summary }}... expand »
{{ todo.text }} « collapse
First  |  Prev  |   1   2  3  {{current_page-1}}  {{current_page}}  {{current_page+1}}  {{last_page-2}}  {{last_page-1}}  {{last_page}}   |  Next  |  Last
{{todos[0].name}}

ADVERTISEMENT
This page was tagged for
Onamalu telugu movies download
onamalu telugu full movie download
Onamalu telugu movie
Onamalu reviews
release date
Follow @fullhyderabad
Follow fullhyd.com on
About Hyderabad
The Hyderabad Community
Improve fullhyd.com
More
Our Other Local Guides
Our other sites
© Copyright 1999-2009 LRR Technologies (Hyderabad), Pvt Ltd. All rights reserved. fullhyd, fullhyderabad, Welcome To The Neighbourhood are trademarks of LRR Technologies (Hyderabad) Pvt Ltd. The textual, graphic, audio and audiovisual material in this site is protected by copyright law. You may not copy, distribute, or use this material except as necessary for your personal, non-commercial use. Any trademarks are the properties of their respective owners. More on Hyderabad, India. Jobs in Hyderabad.