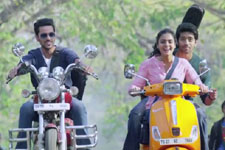 Josh / fullhyd.com
EDITOR RATING
5.5
Performances
Script
Music/Soundtrack
Visuals
6.0
6.0
5.0
7.0
Suggestions
Can watch again
No
Good for kids
Yes
Good for dates
Yes
Wait for OTT
No
Kerintha is directed by Sai Kiran Adivi, earlier an assistant director of Shekhar Kammula. He had assisted the latter in Anand and Happy Days.

From the posters of Kerintha it was clear that it was going to be a movie about a bunch of college-going youngsters. Quite like Happy Days. As the movie begins, a narrator, wearing a blazer, announces that he earlier used to speak with a thick Srikakulam accent. You remember that you'd last seen a Srikakulam student in this not-so-recent movie called... Happy Days. The narrator quickly plunges into a flashback where you are introduced to his batch - a group of three boys and two girls. They are trying to study, socialise, discover new feelings, discover themselves, fight, reconcile, suffer, strive, and eventually settle into their... well, happy days.

In the initial portions, the Srikakulam boy repeatedly displays a ludicrously loud fashion sense till it definitively stops being funny (we argue it never was to begin with). His accent is painfully exaggerated, but not as much as his foolishness. Rural innocence is time and again shown as plain tomfoolery, supposably for comic effect.

You begin to dread if this seeming rehash of Happy Days is also going to be insufferable tripe. But fortunately, your luck starts to turn about here.

For, the director, and producer (Dil Raju), doubling up as writers here, thankfully know their jobs well. They give you characters that you can actually care about. Kerintha isn't your standard-issue half-baked 'youthful entertainer' where the boys are solely concerned about raging hormones and the girls exist solely to work up that rage. Kerintha's characters are quite rooted, and their motivations are relatable.

Bhavana, the film's most level-headed character, is ambitious and studious. Sidharth is a timorous music student who has to work his way through life with a domineering mother. The narrator is Nookaraju whose parents are dizzy toiling away in Srikakulam's mills while he is busy ogling away at urban eye candy. Priya's come down from the US of A to study here, and now has to deal with a relationship which may not give her the acknowledgement she needs. Manaswini, the heroine, is excited about pursuing research in Australia but is confused about her new-found romance. And there is Jai, the hero, who is in love with a girl he'd once seen in a bus. Not spoken to. Just seen. In a bus.

Indeed, the hero of Kerintha is an oddity. He doesn't seem to belong to this film. Sumanth Ashwin's Jai belongs to a different commercial format where the hero is a know-all-do-all. He can break into a fully composed song (with rhyming lyrics no less) at a moment's notice. He can solve everyone's problems with the air of an Art Of Living instructor. He gives rousing speeches and timely quotations on friendship (with expressions so serious that you'll be pardoned for laughing). He pursues a highly unlikely romance with an equally unlikely confidence.

We aren't saying you won't like the character. We're just saying he appears too perfect and extremely out-of-place in a movie which is about messing up and making up.

When Kammula made his biggest hit till date, back in 2007, he approached it like a thesis on college life. There was a burdening comprehensiveness to the movie with all its characters, the several subplots, and the numerous resolutions. The editor must have gone crazy trying to piece together all its disparate elements together into a single free flowing narrative. The good thing about Kerintha is it doesn't suffer from this need to be a thesis. It is comfortable being a story about these six people, and deals with their concerns alone. This lets you engage better with them. Fewer distractions and some sincere performances let Kerintha grow into its own film moving away from the shadow of its most obvious comparison.

With the exception of those of the hero, all the conflicts are familiar. You know people like this, you've been privy to worries like these, and you may yourself have been confronted with issues like these. Neither the romance nor the humour seems forced. The narrator Nookaraju, after you get past his accent schtick, gets some hilarious scenes, and his romance track is done with some nuance. All the actors appear to understand their characters well. The one who plays the studious and caring Bhavana is particularly a find.

There is a pleasant sure-handedness about Sai Kiran's direction. It helps that his producer is Dil Raju who can source very good talent and enhance production values. The cinematography is stunning in places. The music and score work well for the film although it might not warrant listening to after the show. The art direction is effective - everything looks rather pretty throughout the film.

All in all, Kerintha is fairly well-executed. However, the lack of novelty in its concept and the initial over-reliance on old tropes place it just a notch below being a pretty good movie. 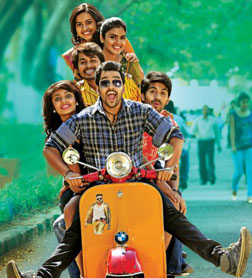 ADVERTISEMENT
This page was tagged for
kerintha telugu movie 68
Kerintha telugu movie
Kerintha reviews
release date
Sumanth Aswin, Sri Divya
Follow @fullhyderabad
Follow fullhyd.com on
About Hyderabad
The Hyderabad Community
Improve fullhyd.com
More
Our Other Local Guides
Our other sites
© Copyright 1999-2009 LRR Technologies (Hyderabad), Pvt Ltd. All rights reserved. fullhyd, fullhyderabad, Welcome To The Neighbourhood are trademarks of LRR Technologies (Hyderabad) Pvt Ltd. The textual, graphic, audio and audiovisual material in this site is protected by copyright law. You may not copy, distribute, or use this material except as necessary for your personal, non-commercial use. Any trademarks are the properties of their respective owners. More on Hyderabad, India. Jobs in Hyderabad.